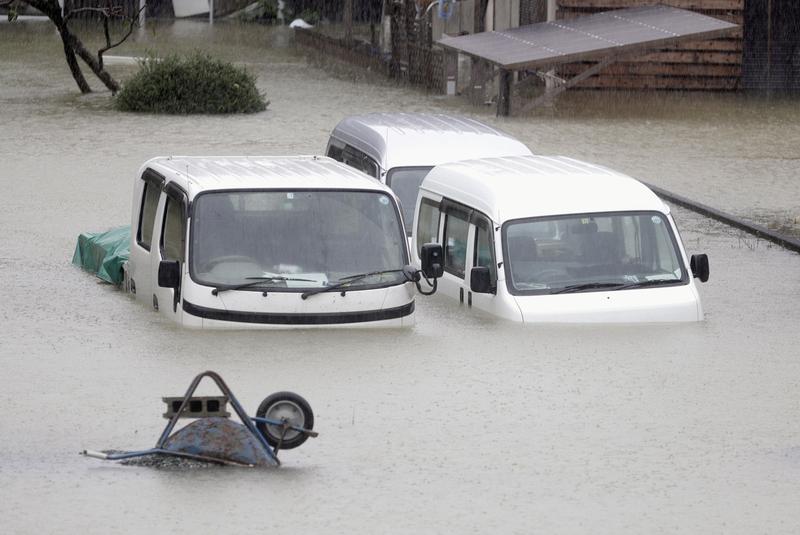 TOKYO (Reuters) – One of the most powerful typhoons to ever hit Tokyo paralyzed the Japanese capital on Saturday, leaving millions confined indoors and streets deserted as fierce rain and wind killed two, flooded rivers and threatened widespread damage.

A 50-year-old man was killed near Tokyo early on Saturday in a car overturned by punishing winds, while another person died after being washed away in a car, public broadcaster NHK said. Nine people remain missing in landslides and flooding, it said.

Authorities issued evacuation advisories and orders for more than 6 million people across the country as the storm unleashed the heaviest rain and winds in years. Some 80 injuries have been reported so far, while more than 270,000 households lost power, NHK said.

The storm, which the government said could be the strongest to hit Tokyo since 1958, brought record-breaking rainfall in many areas, including the popular resort town of Hakone, with a whopping 939.5 mm (37 inches) of rain over 24 hours.

Typhoon Hagibis, which means “speed” in the Philippine language Tagalog, made landfall on Japan’s main island of Honshu on Saturday evening. A magnitude 5.7 earthquake shook Tokyo shortly after.

Even as the typhoon moved away from the capital late on Saturday, one expert warned of further flooding as several surrounding prefectures began releasing water from dams, letting it flow downstream.

“The situation is now worse than this evening,” Nobuyuki Tsuchiya, director of the Japan Riverfront Research Center, told Reuters. About 1.5 million people in Tokyo live below sea level.

“Damage from floods and landslides is likely taking place already,” an agency official told a news conference carried by NHK. “It is critical that people take action urgently to protect their lives and the lives of loved ones.”

A residential area is flooded in Ise, Mie Prefecture, central Japan, ahead of the arrival of Typhoon Hagibis, in this photo taken by Kyodo October 12, 2019. Mandatory credit Kyodo/via REUTERS

Tokyo’s Haneda airport and Narita airport in Chiba both stopped flights from landing and connecting trains were suspended, forcing the cancellation of more than a thousand flights.

Train operators suspended bullet train services extensively, while many train and subway lines in Tokyo were also down for most of Saturday. Usually bustling entertainment and shopping districts such as Shibuya and Ginza were deserted.

Tokyo Disneyland was closed on Saturday, its first weather-related closure since 1984, and supermarkets ran out of bottled water, batteries and other disaster-related goods.

Many people in and around Tokyo took shelter in temporary evacuation facilities early, before the worst of the storm arrived.

Yuka Ikemura, a 24-year-old nursery school teacher, was in one such facility at a community center in eastern Tokyo with her 3-year-old son, 8-month-old daughter and their pet rabbit.

She said she decided to move before it was too late.

“I’ve got small children to take care of and we live on the first floor of an old apartment,” Ikemura told Reuters.

“We brought with us the bare necessities. I’m scared to think about when we will have run out diapers and milk.”

Japanese Formula One Grand Prix organizers canceled all practice and qualifying sessions scheduled for Saturday. Two matches of the Rugby World Cup due to be played on Saturday were also canceled.