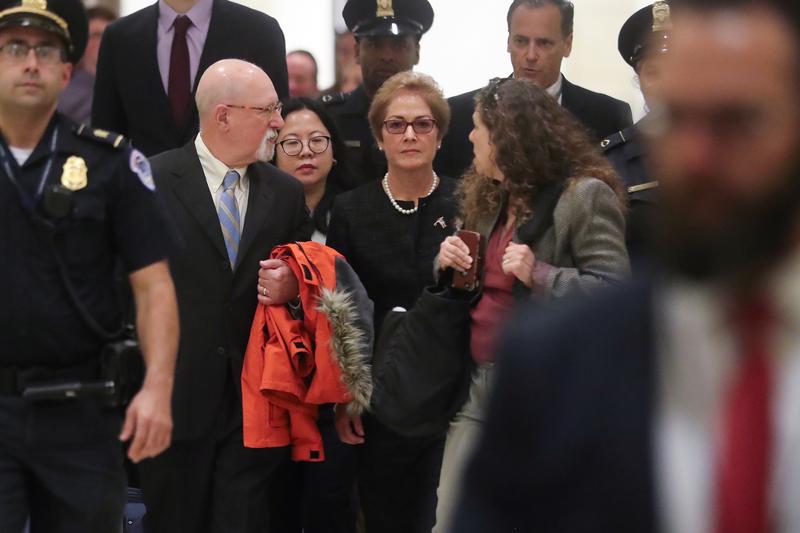 WASHINGTON (Reuters) – The former U.S. ambassador to Ukraine who Donald Trump has called “bad news” told a House of Representatives impeachment inquiry into the president on Friday that Trump removed her from her post based on “unfounded and false claims,” according to U.S. media reports.

Marie Yovanovitch, who was abruptly recalled from Ukraine in May, told lawmakers in closed-door deposition that a top State Department official had told her Trump pushed for her removal for months even though the department believed she had done nothing wrong, according to a copy of her opening statement posted online by the Washington Post.

She entered the Capitol building for the deposition wearing dark glasses and walked past a crowd of journalists without responding to questions as she defied a White House policy of not cooperating with the Democratic-led inquiry into the Republican president.

She said private influence and personal gain have usurped the judgment of diplomats during the Trump administration, threatening to undermine U.S. interests and drive talented professionals out of public service, according to the statement.

A career diplomat who also has served as U.S. ambassador to two other countries, Yovanovitch’s stint as envoy in Kiev was cut short when she was recalled to Washington as Trump allies leveled unsubstantiated charges of disloyalty and other allegations against her.

The investigation of Trump could lead to the approval of articles of impeachment – or formal charges – against the president in the House. A trial on whether to remove him from office would then be held in the U.S. Senate, where the Republicans who control the chamber have shown little appetite for ousting the president.

Trump’s personal lawyer Rudy Giuliani told Reuters last week he had provided information to both Trump and the U.S. State Department about Yovanovitch, who he suggested was biased against Trump. Giuliani accused Yovanovitch of blocking efforts to persuade Ukraine to investigate the Bidens.

“Although I understand that I served at the pleasure of the president, I was nevertheless incredulous that the U.S. government chose to remove an Ambassador based, as best as I can tell, on unfounded and false claims by people with clearly questionable motives,” she said in her statement.

“Today, we see the State Department attacked and hollowed out from within. State Department leadership, with Congress, needs to take action now to defend this great institution, and its thousands of loyal and effective employees,” she said.

According to a White House summary, Trump in his call to Zelenskiy described Yovanovitch saying “the woman was bad news and the people she was dealing with in the Ukraine were bad news.” Zelenskiy agreed with Trump that she was a “bad ambassador.”

She said she did not know Giuliani’s motives for attacking her but that Giuliani associates “may well have believed that their personal financial ambitions were stymied by our anti-corruption policy in Ukraine.”

ANOTHER ENVOY TO TESTIFY

Gordon Sondland, the U.S. ambassador to the European Union, will comply with a subpoena and testify next Thursday before the three House committees leading the impeachment inquiry, his lawyers said.

But Sondland is not authorized to release the documents the committees have sought, his lawyers said, adding that he hopes the material will be shared with the committees before his appearance. Sondland was initially scheduled to testify before the House committees on Tuesday, but was blocked by the Trump administration from appearing.

Sondland, a Trump political donor who contributed $1 million to the president’s inauguration committee, exchanged text messages about Washington’s relationship with Ukraine with other top diplomats. House Democrats received a cache of the texts as part of their impeachment inquiry.

Sondland was a Seattle-based hotelier until Trump named him to his position as ambassador this year.

Democrats have accused Trump of pressuring a vulnerable foreign ally to dig up dirt on a domestic rival, Biden, for his own political benefit. Biden, the former U.S. vice president, is a leading Democratic contender for the right to face Trump in the November 2020 presidential election. Trump has denied he did anything wrong on the call.

Yovanovitch was the third key witness to appear in the impeachment inquiry, although it was not certain she would respond to questions following the White House’s declaration on Tuesday that the administration would not cooperate in the investigation.

On Thursday, two foreign-born Florida businessmen who had helped Giuliani as he investigated Biden were arrested in what prosecutors said was a scheme to illegally funnel money to a pro-Trump election committee and other U.S. political candidates.

The pair, Ukraine-born Lev Parnas and Belarus-born Igor Fruman, were arrested at an airport outside Washington carrying one-way tickets to Vienna. Prosecutors said they conspired to contribute foreign money, including at least $1 million from an unidentified Russian businessman, to candidates for federal and state offices to buy influence.

One of the foreign-born businessmen arrested on Thursday, Parnas, sought the help of a U.S. congressman – identified by a person familiar with the matter as Republican Pete Sessions – to get Trump to remove Yovanovitch, according to the indictment.

Reporting by Richard Cowan and Patricia Zengerle; Writing by Will Dunham and John Whitesides; Editing by Gareth Jones and Alistair Bell