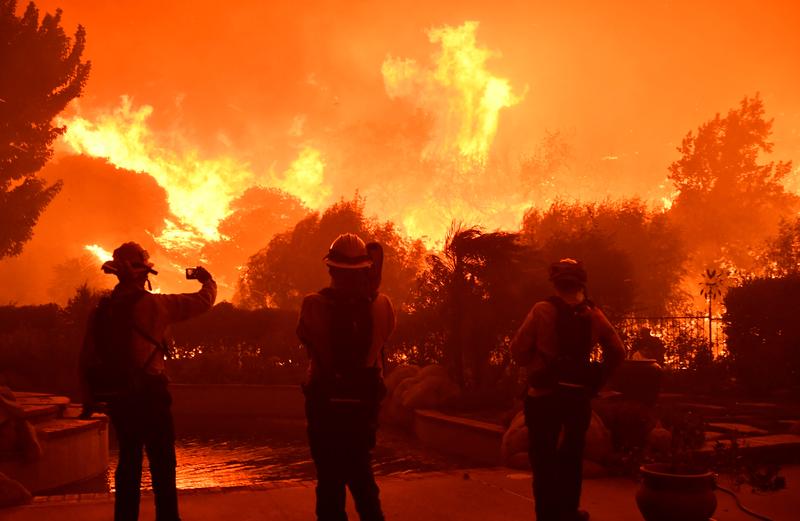 They were among 100,000 residents forced to flee after a fierce, wind-driven wildfire swept through foothills and canyons along the northern edge of Los Angeles on Friday, engulfing homes, closing roads and devouring acre upon acre of dry brush and chaparral.[L2N26W08G]

The evacuations in Southern California came after the state’s largest utility, Pacific Gas and Electric Co., switched off the power to nearly 800,000 homes and businesses to prevent its transmission lines from sparking wildfires under gusting dry winds.

It’s the second time in less than four years the Badreshias have had to leave their home in Porter Ranch, a plush suburb that was the setting for the 1982 movie “E.T.,” because of an emergency. In 2015, a massive, four-month-long gas leak in the area drove thousands to seek shelter with friends or at hotels.

“It’s like a little scary. You have to come here and you don’t have anything,” said Bhagvei Badreshia, 64, as the couple stood outside the Red Cross evacuation center near Porter Ranch.

The couple was awakened at 3 a.m. by their adult daughter, who had been up watching the news because of concerns about fire in the area. She showed them notices saying they had to evacuate.

Paresh Badreshia said he looked out his window and saw flames burning in the hills a couple miles away. A police officer had parked his patrol car out front, making sure everyone in the neighborhood got out, so the couple gathered a few clothes, grabbed their small dog and left, Paresh Badreshia said.

“Here we feel like we are on a slumber party,” Bhagvei Badreshia said of the shelter, adding that her dog was running around and has been fed.

It was a more difficult experience when they had to leave their house because of the 2015 gas leak, the couple said. Residents were forced to stay with relatives and at hotels and were never compensated for their displacement.

Fire officials blame a warming climate for a longer, drier wildfire season that now stretches virtually year-round in parts of the state.

Governor Gavin Newsom, who has called it a “new normal,” this week signed 22 bills that build on $1 billion in the state budget devoted to preparing for wildfires and other emergencies.

California has endured two of its worst wildfire seasons in recorded history in the past two years, forcing millions to evacuate. In November 2018, the Camp Fire became the deadliest wildfire in California history, killing 86 people and destroying the town of Paradise.