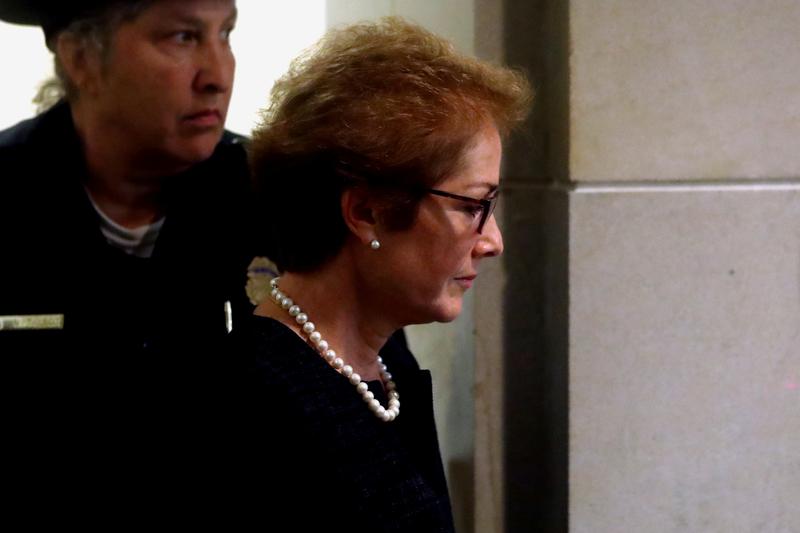 WASHINGTON (Reuters) – The former U.S. ambassador to Ukraine abandoned diplomatic discretion and accused the Trump administration of recalling her based on false claims and of eviscerating the State Department, an act that may end her career but drew praise for her courage.

Three-time ambassador Marie Yovanovitch, who was abruptly recalled from Kiev in May, gave a closed-door deposition on Friday to three congressional committees investigating whether there are grounds to impeach President Donald Trump.

Trump has denied wrongdoing and defended his request to Zelenskiy in a July 25 phone call, which Democrats say is evidence Trump pushed a vulnerable foreign ally to dig up dirt on a rival for his own political benefit.

Former vice president Biden is a leading contender for the right to face Trump in the November 2020 presidential election.

In her prepared testimony, Yovanovitch said the State Department had brought her back to Washington because of pressure from the White House that was based, in part, on disinformation spread by people including the president’s lawyer, Rudy Giuliani. [nL2N26W0IX}

“Although I understand that I served at the pleasure of the President, I was nevertheless incredulous that the U.S. government chose to remove an Ambassador based, as best as I can tell, on unfounded and false claims by people with clearly questionable motives,” Yovanovitch said according to a copy of her prepared remarks published by the Washington Post.

She also said diplomats took risks to defend U.S. interests in part because of a belief that “our government will have our backs and protect us if we come under attack from foreign interests. That basic understanding no longer holds true.

“Today, we see the State Department attacked and hollowed out from within,” she added.

The White House did not respond to a request for comment about the testimony and the State Department declined comment.

Former senior U.S. diplomats said it took courage for Yovanovitch, who joined the foreign service in 1986 and also served as ambassador in Armenia and Kyrgyzstan, to so baldly call out the Trump administration.

“I’m very distressed with her present difficulties, but enormously buoyed by her courage,” former Deputy Secretary of State Richard Armitage, who served in that post under Republican George W. Bush, told Reuters. “A real professional.”

Glyn Davies, a three-time U.S. ambassador who was executive secretary of the White House national security council, said it was a “supremely unnatural act” for a diplomat to have to defend her actions and criticize her bosses.

“This demonstrates that the administration’s guerilla war against American diplomats … has now become open warfare,” Davies said. “Clearly Marie Yovanovitch decided, given what had happened to her, that it was necessary … to rebuke her own commander in chief and his appointees.”

Yovanovitch, who is now a senior State Department fellow at Georgetown University, is likely at the end of her diplomatic career. Former diplomats said it was inconceivable Trump would give her another assignment, triggering her retirement.

But they also said it was unlikely she would be subjected to direct retaliation, noting she had testified in response to a congressional subpoena that gave her little choice but to appear despite a State Department order not to testify.

“Its members do not ask for much in return, but do ask fairly that they not be forced to choose sides in domestic political disputes,” Rubin said.

Representative Michael Quigley, an Illinois Democrat who attended Yovanovitch’s appearance, was circumspect when he stepped out of the secure conference room where she spoke: “No comment but she’s a brave woman.”