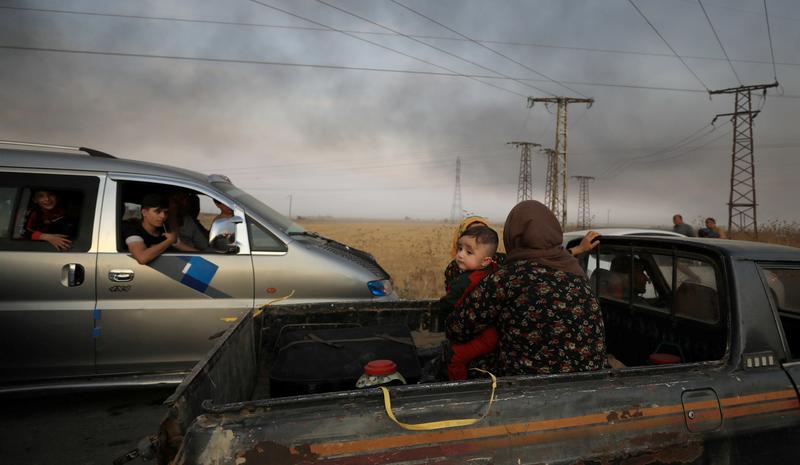 NASHVILLE/NEW YORK (Reuters) – Like many Kurds living in the United States, Lava Antar has had a hard time sleeping this week, waking often to check reports of Turkish jets and artillery pounding her northeast Syria homeland and learning her former neighbor’s 30-year-old son was killed.

FILE PHOTO: A woman with a baby sits at a back of a truck as they flee Ras al Ain town, Syria October 9, 2019. REUTERS/Rodi Said/File Photo

“We feel betrayed, we feel angry,” said Antar, a 26-year-old student, during at a meeting to plan a Saturday rally in New York City decrying Turkey’s strikes, which sparked international criticism and fears of a humanitarian catastrophe.

Turkey attacked after U.S. President Donald Trump decided to withdraw U.S. troops who had been fighting alongside Kurdish forces against Islamic State militants.

The U.S. Census Bureau has estimated there are about 21,000 people of Kurdish ancestry in America. Hundreds on Friday protested in front of the federal courthouse in Nashville, home to the largest U.S. concentration of Kurds.

Kurdish-American demonstrators carried signs with messages including “U.S. protect us. Stand by your word” and “If you don’t want refugees, stop creating them.” More rallies were planned in the coming days in New York, Washington and Dallas.

Kurds have long played a role in U.S. military action in the Middle East, from the first Gulf War in the early 1990s to the latest fights against Islamic State militants.

“We’re not going to just let this go in silence,” said Jotyar Hussein, a 34-year-old construction worker that attended the rally with his 5-year-old son. “We stand side-by-side with the U.S. Army and fight the ISIS. They do air, we do the ground. We both do our job. Now this is what the Kurdish people get as a reward?”

“Trump all of a sudden forgot that Kurds were fighting shoulder-and-shoulder with American soldiers,” said Tabeer Sindi, 34, secretary of the Tennessee Kurdish Community Council in Nashville and a rally organizer.

Sindi, a married father of four boys whose family came from northern Iraq 24 years ago, said his father, Ismail, was a Peshmarga commander killed in a mustard gas attack while fighting Saddam Hussein’s forces in 1988.

Even some of Trump’s closest allies blasted the move, announced on Sunday. Twenty-nine of his fellow Republicans in the House of Representatives on Thursday said they would announce sanctions against Turkey over the attacks, a day after similar legislation was announced in the Senate.

‘STAND BY YOUR WORD’

Sindi said people in Nashville’s Kurdish community have been getting news from Syria through social media and media outlets but also personal contacts and family members.

“We have a lot of Trump supporters in our community, but even they are mad. They are unhappy about this decision,” Sindi said, adding that he also blames Congress and other U.S. allies for allowing the attack to begin.

“Where are all the other countries? The whole world has been silent about this.”

Turkish President Tayyip Erdogan has said the purpose of the assault is to defeat the Kurdish YPG militia which has links to insurgents in Turkey.

Kurdish activists in the United States said they planned to call congressional representatives.

“I hear the senators — Republican and Democrats — talking about sanctions, but that that’s not going to stop Erdogan,” said Shyar Antar, a 24-year-old cousin of Lava Antar, from Qamishli City in northeast Syria, at the same New York meeting.

“President Trump should send back the troops to the border so that Turkey would stop the bombing. But I don’t think after what has happened that Trump will go back,” Antar said. “So I think right now the only hope is in Congress, try and implement a no fly zone.”