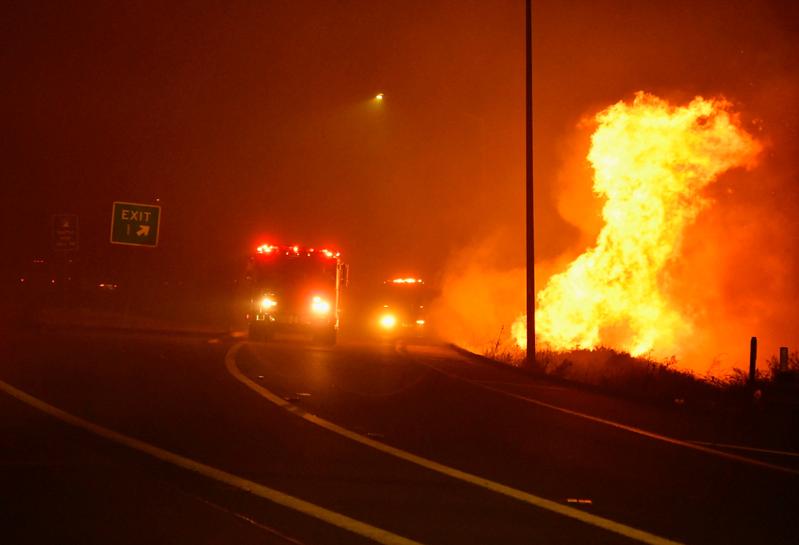 (Reuters) – Burning trash dumped by a garbage truck caused a fire that by early Friday had destroyed dozens of homes in California’s Riverside County, fire officials said, as wildfires across the state led to power cuts for hundreds of thousands of people.

Authorities ordered hundreds of people in the area to evacuate their homes and seek shelter as they worked through the night to contain the blaze.

The Sandalwood Fire was one of about 275 wildfires that have broken out across California as hot, gusty winds signaled the start of its peak fire season, state officials said.

It erupted when a “trash truck dumped a load of burning trash that spread onto vegetation,” shortly before 2 p.m. Thursday, in the community of Calimesa, about 70 miles (110 km) east of Los Angeles, the fire department said in a release.

Riverside County Fire Department spokeswoman April Newman told the Los Angeles Times that the fire somehow started on the truck and the driver dumped the load in an effort to save the vehicle.

No other information on the driver or possible charges were released.

The blaze, driven by winds gusting up to 55 miles per hour, spread to a mobile-home park, where more structures were destroyed and injuries were reported, the fire department said on its website.

“There were civilian injuries reported early in the day but we do not have any further information on that at this time.”

Although many of the other reported blazes in the state were quickly contained by firefighters, the risk to life and property has prompted Pacific Gas and Electric Co cut power to about 730,000 customers, a move that California Governor Gavin Newsom blamed on years of mismanagement by the utility.

By late Thursday, PG&E announced it had restored power to more than half of those affected, and about 312,000 remained without electricity.

Much of northern California, from San Francisco to the Oregon border, remains under a state “red flag” fire alert.

Newsom faulted PG&E for putting what he called “greed” ahead of investments in its infrastructure to harden the electrical grid against dangerous winds.

PG&E filed for bankruptcy in January 2019, citing potential civil liabilities in excess of $30 billion from major wildfires linked to its transmission wires and other equipment.

As winds moved south, a similar cutoff was under way by Southern California Edison, which warned more than 173,000 customers they could lose power.