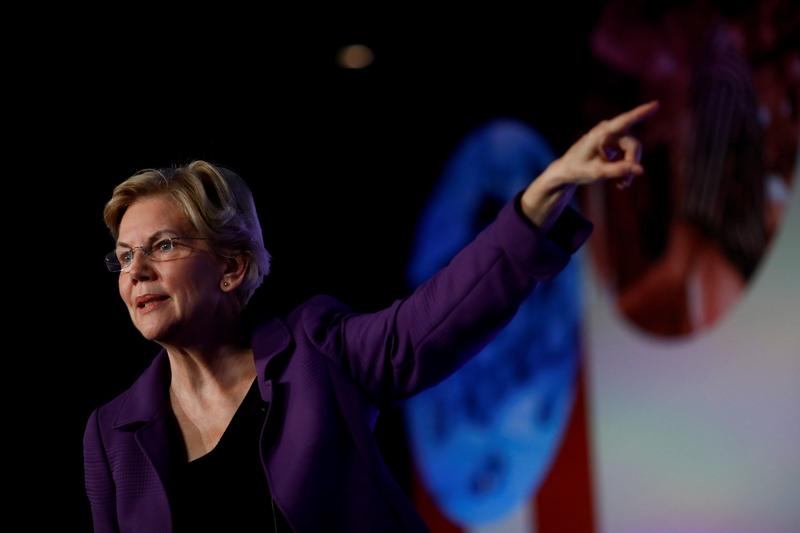 WASHINGTON (Reuters) – U.S. presidential candidate Elizabeth Warren called on AT&T Inc to reject an activist investor plan she said would lead to job cuts, staking out a different position than President Donald Trump who has cheered the investor’s involvement.

In a Twitter post on Thursday, Warren said she sided with union workers at the telecommunications and media conglomerate, who have criticized a plan submitted last month by AT&T activist investor Elliott Management Corp to boost the company’s profits.

Her comments were the latest sign Warren, a frontrunner in the Democratic nomination contest ahead of the 2020 presidential election, could be a vocal critic of company employment decisions if she were elected.

Such an approach would continue Trump’s own practice of publicly criticizing company decisions to let workers go.

“They should reject this plan to turn a quick profit by laying off workers and outsourcing jobs,” Warren said.

AT&T (T.N) and Elliott Management did not immediately respond to requests for comment.

Elliott Management, a hedge fund, unveiled last month a $3.2 billion stake in AT&T, the second-largest U.S. wireless carrier, and urged it to end its acquisition spree and focus on improving its business.

The fund submitted a plan to AT&T’s board to make changes by selling off units, buying back shares or adding board members.

The document here submitted to the AT&T board did not explicitly describe a layoff plan but did call for “outsourcing of non-core network functions” as well as “closing redundant stores and increasing labor productivity.”

Trump, a frequent critic of U.S. cable news channel CNN, which is owned by AT&T, at the time said it was “great news that an activist investor is now involved with AT&T.” The White House on Thursday did not immediately respond to a request for comment.

Trump in June urged AT&T customers to drop the telecommunications company over its ownership of CNN.

The Communications Workers of America, which represents over 100,000 AT&T workers, has called on the company to reject Elliott’s proposals, which it said would lead to job cuts.

AT&T is under pressure to cut its huge debt pile. The company said on Wednesday it would sell its wireless and wireline operations in Puerto Rico and the U.S. Virgin Islands to Liberty Latin America Ltd (LILA.O) for $1.95 billion.