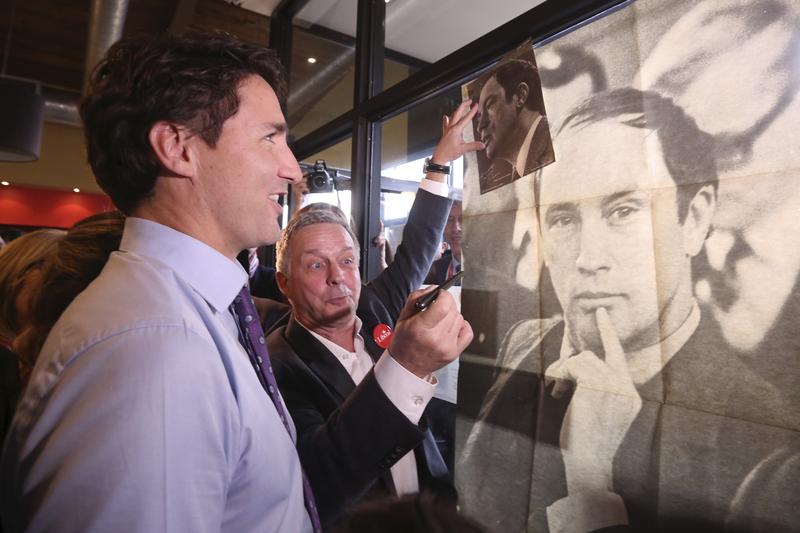 OTTAWA (Reuters) – A Canadian Liberal prime minister with the surname name Trudeau takes office amid huge public enthusiasm, attracts global admiration, clashes with an unpredictable U.S. president and then struggles in the next election.

Fast forward nearly 50 years and his son Justin is in an eerily similar situation: The once-popular Liberal prime minister is now in trouble ahead of an Oct. 21 election.

The elder Trudeau, a flamboyant, stylish politician, won a landslide victory in 1968. His public appearances triggered screaming crowds and the birth of the phrase “Trudeaumania.”

Yet four years later in 1972, at the end of an election campaign widely mocked as one of the worst in Canadian history, he hung onto office by the narrowest of margins and had to form a pact with the rival left-leaning New Democrats to keep governing.

Justin Trudeau, 47, who won power in 2015 by promising “Sunny Ways” but is now trying to shake off images of himself in blackface years ago, also set off a wave of Trudeaumania internationally. He too appears headed for a minority government and analysts predict he will need the support of the New Democrats to govern.

“The resemblance is in the disappointment with Trudeau senior and now Trudeau junior,” said University of Toronto professor Robert Bothwell.

“It’s remarkably similar because of the magnetism both of them showed in their initial campaigns.”

The Trudeaumania of 1968 faded and by 1972 the best slogan the Liberals could come up with was “The Land is Strong.”

“Nobody knew what the hell that meant,” said Bothwell. “People were just not moved.”

Justin Trudeau is campaigning under the message of “Choose Forward,” which is not grammatical in English.

Polls show the Liberals locked in a tie with the main opposition Conservative Party and unable to break away.

Bothwell and other historians who lived through the earlier campaign say there are limits to the comparisons. For one, Pierre Trudeau’s Liberals showed a degree of arrogance that the modern party has long since lost.

“The 1972 election was widely interpreted as one where the Liberals were chastised for being overly complacent and possessing in their minds a divine right of governance,” said Allan Tupper, a political science professor at the University of British Columbia.

Pierre Trudeau “just wasn’t engaging in the political cut and thrust” of the 1972 campaign, said University of Manitoba history professor Barry Ferguson, noting his son had put much more effort into his bid for re-election.

Their counterparts today – Andrew Scheer of the Conservatives and Jagmeet Singh of the New Democrats – are younger and with much lighter resumes.

“I can see why people say there are parallels, but the capacities of the political leaders were different,” Ferguson said.

A Liberal spokeswoman, asked whether the campaign saw any similarities with the events of 1972, said Trudeau was focused on moving forward.

In the 1972 election, Pierre Trudeau won by just two seats.

But the elder Trudeau, who died in 2000 at age 80, was able to rebound politically after his election scare. He won a parliamentary majority in 1974 and stayed in power for most of the next decade.

Justin Trudeau is forecast to win at best 160 of 338 seats, falling short of an effective majority.