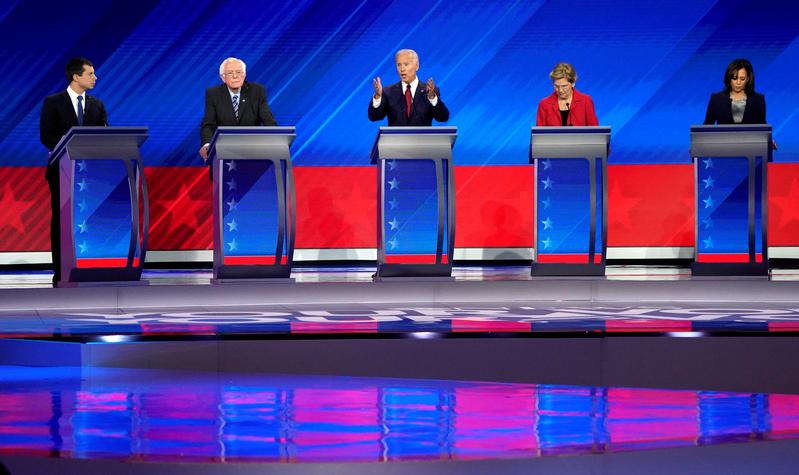 (Reuters) – Republican Donald Trump is touting tax cuts and economic gains during his presidency as a reason why he should get re-elected in November 2020.

Democrats hoping to thwart his bid for a second term say, however, that Trump’s economy has only benefited the rich while leaving behind the working class. Many are proposing broad changes such as a rollback of Trump’s tax cuts and free college tuition.

One sign of how broad the appetite for change is among Democrats: All but one of the dozen candidates who qualified for the Oct. 15 Democratic debate want to more than double the federal minimum wage to $15 an hour from $7.25.

The one who did not support such an increase, businessman Andrew Yang, instead wants to pay every American adult $1,000 per month.

Here are some of the views of the top 2020 presidential candidates on jobs, taxes and government assistance.

Trump credits his administration’s efforts to deregulate industries and cut taxes for a bullish stock market and a historically low unemployment rate.

“Do you think it was luck that got us to the best Stock Market and Economy in our history,” the president asked on Twitter last month. “It wasn’t!”

Yet economic growth rates have slowed this year as the benefits of the 2017 tax cut fade and tariffs imposed on Chinese imports hurt American farmers and manufacturers.

Trump is now considering additional tax cuts for the middle class, and White House economic adviser Larry Kudlow said in September that such a plan would be announced in mid-2020.

Biden, a top contender for the 2020 Democratic nomination, would roll back some of the 2017 tax cuts. Doing so would help pay for his plans to improve and expand the Affordable Care Act, formally known as Obamacare, which was passed in 2010 but which Trump has sought to replace.

Biden wants to roll back some of Trump’s tax cuts by raising the marginal tax rate on the highest income earners back to 39.6%, from 37%, and would also raise some taxes on investment profit.

Like many of the Democratic candidates, he also supports expanding some tax credits for lower-income workers and raising the federal minimum wage.

“It’s time to reward work, not just wealth,” Biden says regularly in campaign events. Yet Biden has stopped short of endorsing some of the more aggressive economic proposals of his rivals, from universal income guarantees to imposing federal taxes on wealth.

Hailing from a city ravaged by the loss of automobile manufacturing, Buttigieg has emphasized efforts to renew a U.S. economy he sees as tilted to the wealthy.

“Our country is in trouble,” he said in a debate in July. “GDP is going up and life expectancy is going down. Think about what that means. And it’s only getting tougher.”

Buttigieg proposes plans to pour billions of dollars of investment into the African-American community and into rural areas. He has also proposed legislation requiring companies to disclose gender pay disparities and boosting paid sick leave and family-leave policies.

The former prosecutor supports reversing Trump’s tax cut on corporations and high-paid workers and using the extra revenue to expand tax rebates for the middle class.

Harris also wants to expand support for college tuition and paid family leave and provide tax credits to people who spend at least 30 percent of their income on rent and utilities.

She proposes paying for a proposed expansion of government-provided healthcare benefits by raising taxes on companies and the top 1% of income earners, as well as new levies on stock and bond transactions.

Sanders, a U.S. senator from Vermont and a self-described “democratic socialist,” won a devoted following with a message during the 2016 Democratic nominating race about income and wealth inequality.

In his second run for the party’s nomination, Sanders has rolled out aggressive proposals, including guaranteeing all Americans a job, canceling student loan and medical debt, paying for tuition-free public colleges and raising taxes on the wealthy.

Sanders said his proposed “tax on extreme wealth” would begin at 1% for those with a net worth above $32 million and rise in increments to 8% on wealth over $10 billion, hitting the wealthiest 180,000 Americans.

Many of Sanders’ proposals, however, are controversial and seem unlikely to garner the necessary support from Congress if the Senate stays in Republican hands after next year’s elections.

Before joining Congress, Warren rose to prominence for pushing to strengthen consumer protection after the 2008 global financial crisis.

As a presidential candidate, she has become known for a sweeping series of plans for economic reforms, including a wealth tax. That plan would tax 2% of people’s net worth above $50 million and 3% for wealth over $1 billion.

Booker has focused his campaign on the “common pain” felt by Americans because of racial and wealth inequality.

“The dream of this country is under threat right now,” he said at a Democratic debate in July, noting that young people now may end up in worse shape financially than their parents.

The proposal is intended to give more people a chance at homeownership by giving them some cash that they could use to buy a house, but Booker would also propose giving renters a tax credit so they would not have to pay more than 30 percent of their income on shelter.

O’Rourke, a native of the U.S.-Mexican border town El Paso, has blasted Trump’s use of tariffs as a “huge mistake” and has vowed to suspend them on his first day in office.

Tariffs “constitute the largest tax increase on the American consumer, hitting the middle class and the working poor especially hard, and farmers in Iowa and across the country are bearing the brunt of the consequences,” O’Rourke said at a July Democratic debate. “When have we ever gone to war, including a trade war, without allies, friends and partners?”

The former tech executive is focusing his campaign on what he calls the “Freedom Dividend” – Yang wants to give all Americans over the age of 18 a $1,000 check every month.

He has pitched the idea to support the economy, lift people out of poverty and help workers displaced by increasing automation.

Yang has proposed paying for the new benefit partly by levying a 10% value-added tax, a fee attached to purchases made by businesses and consumers.

He would also propose lifting taxes on capital gains and carried interest, two types of profit earned on investments, as well as introducing a new tax on financial transactions.

He would pay for the benefits by imposing a new tax on inheritances over $2 million and repeal Republicans’ 2017 tax cuts within his first 100 days as president.

Klobuchar, who has sponsored or co-sponsored more than 100 bills that became law, has proposed a list of more than 100 actions she wants to take in her first 100 days as president.

They include directing her attorney general to review mergers that have already taken place to prevent monopolies from forming, allowing students to refinance loans at lower interest rates and repealing part of the Trump tax cuts.

Tom Steyer, a former investor who is the only billionaire among the Democratic candidates, has said he supports a tax that would cut his own wealth.

He has proposed charging people with a net worth over $32 million a new 1% tax.

The Iraq war veteran and congresswoman from Hawaii has centered her campaign on her anti-war stance, not the economy. But she has also said she would serve “the interests of all Americans, not just the rich and powerful” as president and said that many Americans had struggled financially since the 2008 global financial crisis.

She has advocated taking money currently spent on the military and “tax giveaways” to wealthy people and corporations and using that to expand Social Security programs for the old and disabled.