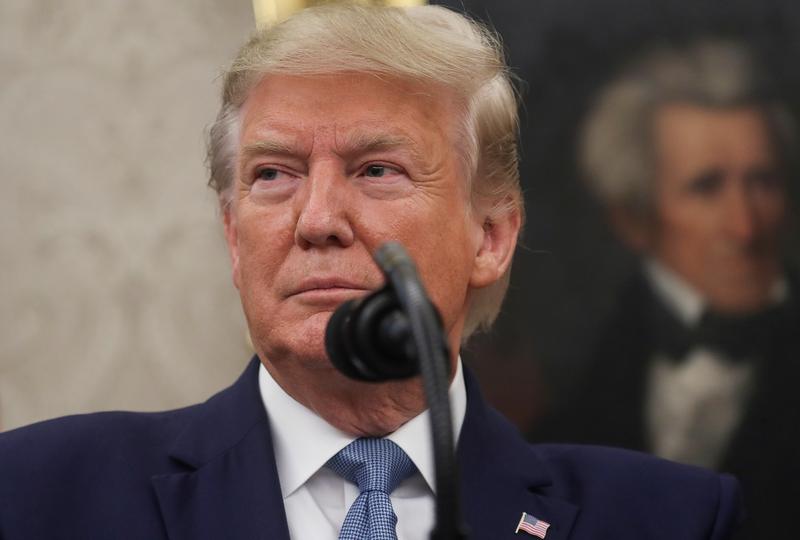 FILE PHOTO: With a portrait of former U.S. President Andrew Jackson hanging in the background, U.S. President Donald Trump speaks as he awards the Presidential Medal of Freedom to former Attorney General Edwin Meese in the Oval Office of the White House in Washington, October 8, 2019. REUTERS/Leah Millis

(Reuters) – The Trump administration will announce plans to change healthcare regulations on Wednesday to loosen anti-kickback provisions that restrict the kinds of outside services providers can refer patients to, administration officials said.

President Donald Trump on Thursday will explain how the new rules advance his broader healthcare agenda, which includes reducing regulatory burdens and promoting innovative ways to reimburse healthcare providers, in a speech in Minnesota, the officials said.

The plan will change how the Department of Health and Human Services (HHS) enforces the Physician Self Referral Law, also known as the Stark law, which penalizes healthcare providers for referring patients to outside services that the provider could stand to benefit from financially.

HHS will create exceptions for healthcare providers that enter into agreements with other parties if they are aimed at cutting costs and improving patient health, the officials said.

The order was the Republican president’s answer to Democrats like Bernie Sanders, who is running to become the party’s nominee in the 2020 presidential election and is promoting the idea of Medicare for all Americans.

The Trump administration has also rolled out measures in recent months designed to curtail drug prices and address other problems in the U.S. healthcare system.

Policy experts say the efforts are unlikely to slow the rise of drug prices in a meaningful way, however.