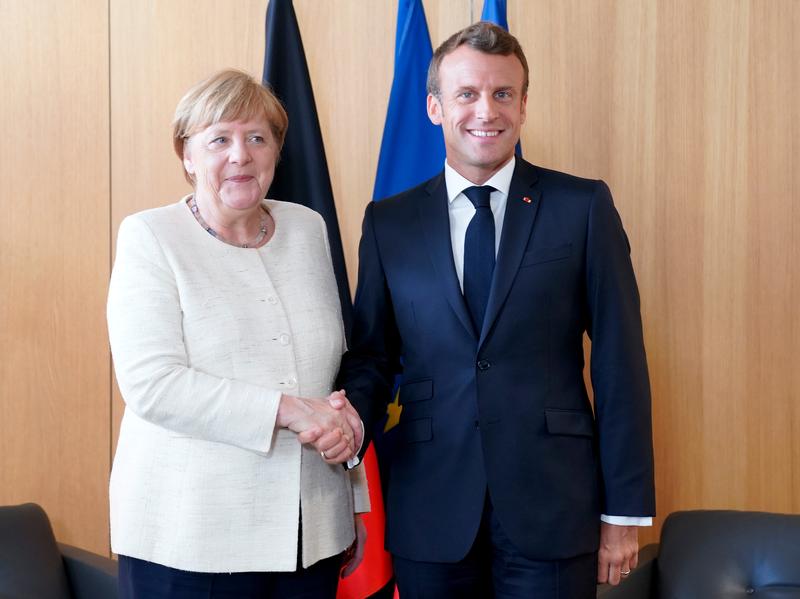 PARIS/BRUSSELS (Reuters) – The European Union’s two most powerful leaders, Germany’s Angela Merkel and France’s Emmanuel Macron, will meet just days before a crunch Brexit summit next week which Britain says is the last chance to secure an orderly departure from the bloc.

As the clock ticks down to the Oct. 31 departure date, Brexit descended into a public row between London and Brussels this week as both sides position for another delay followed by an election or an acrimonious divorce.

After a Downing Street source said a Brexit deal was essentially impossible because German Chancellor Merkel had made unacceptable demands, the EU accused Johnson of playing a “stupid blame game”.

Macron will meet Merkel at the Elysee Palace this coming Sunday to discuss European affairs ahead of the Oct. 17-18 EU summit and preparations for a Franco-German summit on Oct. 16, Macron’s office said.

EU diplomats, though, are sceptical about the chances of a deal. Most expect Johnson to be forced to accept a delay to Brexit – a step that could ultimately lead to either a disorderly exit or the reversal of the entire Brexit endeavor.

“There will be no rabbit-out-of-the-hat solutions,” one EU official told Reuters. “There will be more talks and more political contacts. But, for the time being, there is no breakthrough to be reported.”

Johnson has repeatedly cast the EU summit next week as the last chance for the EU to strike a deal or face the disruption of a no-deal Brexit that would divide the West, threaten the unity of the United Kingdom and roil financial markets.

A week ago, he proposed a possible solution to ensure the border between the British-ruled province of Northern Ireland and EU member Ireland does not become a backdoor into the EU’s single market and customs union.

The EU’s cool reaction to his proposals indicates that, short of an unexpected last-minute breakthrough, Johnson will have to decide whether to accept another delay or to go for a no-deal Brexit and get around a law demanding he extend.

The EU’s executive agreed on Wednesday with the assessment of the bloc’s Brexit negotiator that the British proposals did “not represent a satisfactory solution”, the bloc’s top budget official, Guenther Oettinger, said.

In the Brexit maelstrom where newspaper reports and contradictory tweets can send sterling into gyrations, EU officials denied a report in The Times that the bloc was preparing a major concession to Britain to secure a Brexit deal.

“Unfortunately, no bold new offer is coming from the EU side at this stage,” an EU official said, while stressing that the bloc was not closing the door to more talks with Britain.

Britain’s Brexit minister Steve Barclay was due to have lunch with EU chief Brexit negotiator, Michel Barnier, on Thursday “to check if there is any more flexibility on the UK side to head for a deal. For now, there seems to be none,” a diplomat said.

Behind the rhetoric, the Brexit finale will ultimately be decided by Merkel, Macron, Johnson, European Commission President Jean-Claude Juncker and Irish Prime Minister Leo Varadkar – all of whom say they want an orderly exit.

Johnson and Varadkar could meet later this week.

With chances of a deal receding, focus was turning back to British domestic politics where Johnson is under intense pressure from opponents to delay Brexit.

Anti-Brexit campaigners claimed victory after Scotland’s highest court decided on Wednesday to wait before ruling whether to force Johnson to seek a delay to Britain’s EU divorce date if he has not struck a deal in the next 10 days.

British government lawyers had told the court that Johnson accepted that he must carry out the requirements of the law demanding a delay, even though he has publicly rejected asking for any further extension.