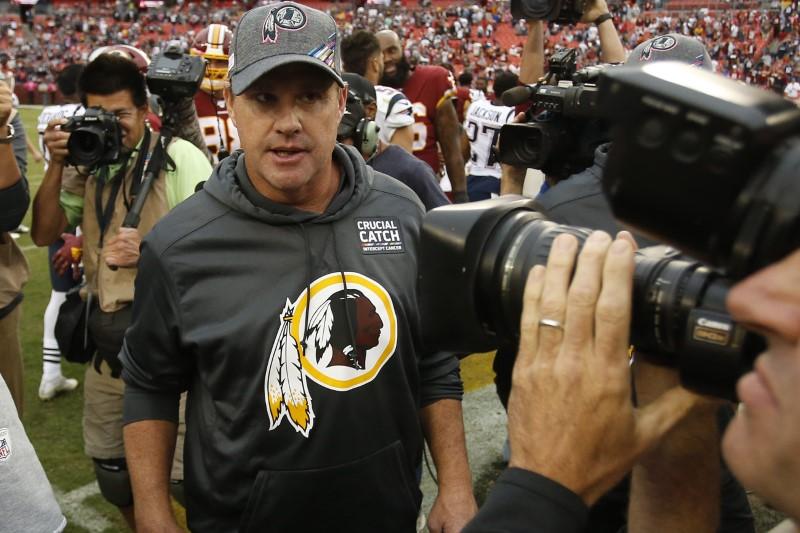 The Redskins made the announcement via Twitter, saying Gruden had been informed of the decision in a morning meeting with owner Daniel Snyder and team president Bruce Allen.

“Tweaked it just a little bit. I think he’s going to be OK,” Reid said of the reigning NFL Most Valuable Player. “He was pretty good at the end there. We’ll see how that goes.”

Mahomes didn’t miss a snap in the 19-13 setback, completing 22 of 39 passes for 321 yards and a touchdown while rushing for another 17 yards on three carries.

Taylor told reporters Green will not practice leading up to Sunday, when the Bengals (0-5) visit the Baltimore Ravens (3-2).

Green has been out since injuring ligaments in his right ankle during the first practice of the preseason.

—Baltimore Ravens safety Earl Thomas is not expected to be suspended for administering the hit that knocked Pittsburgh Steelers quarterback Mason Rudolph out of the Sunday game.

NFL Network’s Tom Pelissero cited a source informed saying that Thomas likely won’t miss any time, but that the league will review the play for a possible fine.

—The Tennessee Titans released kicker Cairo Santos a day after he missed four field-goal attempts in a 14-7 home loss to the Buffalo Bills.

NFL Network reported Tennessee would sign former Chicago Bears kicker Cody Parkey to replace Santos, who was 4-for-9 on field-goal attempts this year and 12-for-12 on extra points.

Parkey was released by the Bears during the offseason after he missed a 43-yarder with seconds remaining in Chicago’s 16-15 playoff loss to visiting Philadelphia. He worked out for the New York Jets and the Colts but was not signed.

—Giants receiver Sterling Shepard is in concussion protocol for the second time this season and will miss New York’s Thursday game against the New England Patriots, according to multiple reports.

Shepard’s latest concussion occurred during the third quarter of a 28-10 loss to the Minnesota Vikings on Sunday. The NFL Network reported that Shepard, 26, could miss “considerable time.”

—Giants running back Saquon Barkley returned to practice in a limited role after missing two weeks due to a sprained ankle. New York coach Pat Shurmur is unlikely to make a decision on Barkley until game day this week.

—Jets quarterback Sam Darnold will undergo another round of tests to determine his status for the team’s Sunday game against the Dallas Cowboys.

“If he gets cleared, he’ll start,” Jets coach Adam Gase said of the second-year quarterback, who has been at an enhanced risk of sustaining a ruptured spleen as he works his way past mononucleosis.

—The Jacksonville Jaguars lost starting tight end James O’Shaughnessy for the rest of the season due to a torn ACL, according to NFL Network’s Ian Rapoport.

An MRI exam on Monday revealed the extent of the injury, sustained during the Jaguars’ Sunday loss to the Carolina Panthers.

—Jaguars cornerback Jalen Ramsey was in Houston to see a back specialist at the team’s request, according to Rapoport.

Ramsey has missed the past two games with the back problem, last appearing in the Jaguars’ Thursday night game on Sept. 19, which came after he requested a trade.

—Indianapolis defensive end Kemoko Turay will miss the remainder of the season after sustaining a broken ankle in the Colts’ win over the Chiefs, multiple media outlets reported.

Turay, 24, was injured while combining with fellow defensive end Jabaal Sheard to sack Mahomes on the Chiefs’ final play from scrimmage.

ESPN first reported New England declined to activate Watson, 38, who had been suspended for the season’s first four games after a violation of the NFL’s performance-enhancing drugs policy.

—The Tampa Bay Buccaneers will be without right tackle Demar Dotson and right guard Alex Cappa for their Sunday game in London against the Panthers.

Dotson sustained an injured hamstring and calf in Tampa Bay’s 31-24 loss to New Orleans on Sunday. Cappa managed to finish the game despite breaking his arm in the second quarter.