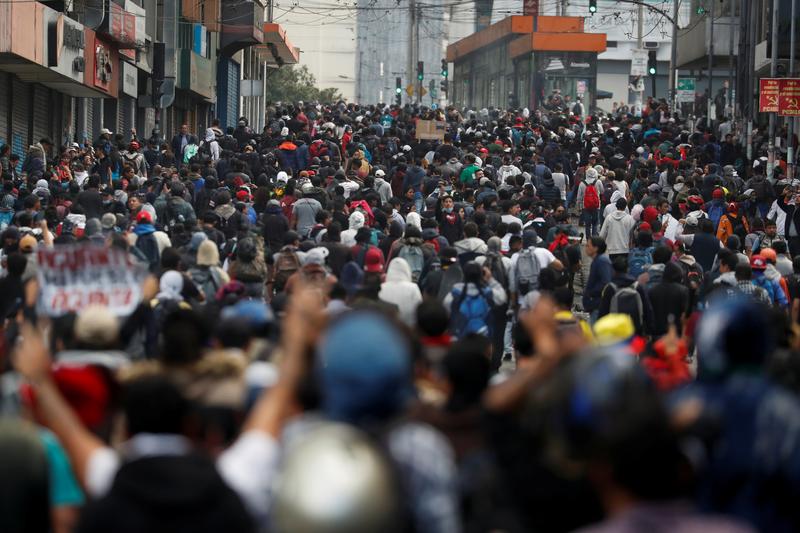 QUITO (Reuters) – Thousands of indigenous protesters marched into capital Quito on Monday in a fifth day of action against austerity measures that have sparked the worst unrest in years, prompting President Lenin Moreno to accuse opponents of attempting a coup.

The protests erupted in the Andean nation last week when Moreno, who abandoned his predecessor and one-time mentor Rafael Correa’s leftist policies upon taking office in 2017, announced a measure to eliminate fuel subsidies to reduce the country’s fiscal deficit.

Umbrella indigenous organization CONAIE said demonstrations would continue until Moreno withdraws the measure. The mobilization would coincide with a national strike planned for Wednesday.

But in a defiant national television address on Monday evening, after protesters reached Quito’s historic center, Moreno said he would not back down on the fuel price hike in the face of what he called a “destabilization plan” orchestrated by Correa and leftist Venezuelan President Nicolas Maduro.

“They are behind this coup attempt, and they are using and instrumentalizing some indigenous sectors,” Moreno said, flanked by military officials and Vice President Otto Sonnenholzner. He added that he had temporarily moved government operations to the southern city of Guayaquil, the financial capital.

“What has happened is not a manifestation of social discontent in protest of a government decision. The lootings, vandalism and violence show there is an organized political motive to destabilize the government.”

Correa, who lives in Belgium, has been fiercely criticizing Moreno, including with a video circulating on social media where he sings “Ecuadoreans, to the streets … Goodbye, Lenin!”

Moreno noted that Correa had recently traveled to Caracas and met with Maduro, but did not provide further evidence that Maduro was behind the protests. Venezuela’s Information Ministry did not immediately respond to a request for comment.

Ecuadoran Interior Minister Paula Romo told local Radio Quito earlier on Monday that 477 people had been detained since Thursday, mainly for vandalism, including the destruction of a dozen ambulances.

The government has put a state of emergency in place and says two dozen policemen have been injured in clashes with protesters, while a man died when he was hit by a car and an ambulance could not reach him through the barricades.

It said scores of indigenous protesters looted the warehouses of dairy company Parmalat Ecuador in Cotopaxi province on Monday.

The demonstrations also hit the oil sector, with state-run oil company Petroamazonas suspending operations at three of its fields after they were “taken” by “individuals not affiliated with the operations,” the Energy Ministry said in a statement.

‘BLOW TO THE PEOPLE’

But security forces’ presence was limited on Monday afternoon as roughly 7,000 indigenous protesters entered Quito’s southern limits on foot, in trucks and on motorbikes. They were applauded and embraced by residents of the capital, who gave them food and water, according to Reuters witnesses.

“The president is hurting the people,” said Guillermo Montano, a 58-year-old retired member of the armed forces in Quito. “The measures are a blow to the people. Stuff is getting more expensive, and wages are not rising.”

Although he enjoys the support of business and the military, Moreno’s popularity has sunk to under 30%, compared with 70% after his 2017 election.

Indigenous-led protests brought down three presidents in the years before Correa’s rule.

Michael Kozak, the U.S. assistant secretary of state for Western Hemisphere Affairs, said the U.S. was monitoring events in Ecuador and rejected “violence as a form of political protest.”

“Dialogue and respect for rule of law are core democratic values and the best way for the people of Ecuador to enjoy greater economic prosperity,” Kozac wrote.

Ecuador’s government is struggling with a large foreign debt and fiscal deficit and earlier this year reached a $4.2 billion loan deal with the International Monetary Fund that hinges on belt-tightening reforms.

As well as ending fuel subsidies, the government is trimming the state work force and planning some privatizations. Moreno says the fuel subsidies, in place for four decades, distorted the economy and cost $60 billion.