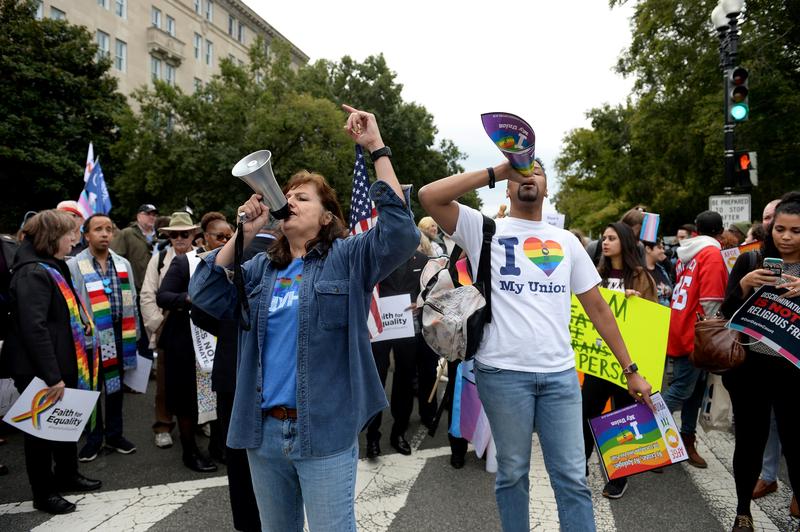 WASHINGTON (Reuters) – For many of the hundreds of LGBT activists demonstrating outside the U.S. Supreme Court during arguments in major cases on gay and transgender rights, the story being told inside about plaintiffs Gerald Bostock and Aimee Stephens sounded all too familiar.

LGBTQ activists and supporters hold a rally near the steps of the Supreme Court as it hears major LGBT rights case on whether federal employment law that outlaws discrimination on the basis of sex covers sexual orientation and gender identity in Washington, U.S., October 8, 2019. REUTERS/Mary F. Calvert

Bostock is a former county child welfare services coordinator in Georgia who was fired after joining a gay-friendly softball league. Stephens is a transgender woman who was fired as a funeral director in Michigan after revealing plans to transition from male to female.

As the nine justices on Tuesday weighed whether a landmark federal law that bars employment discrimination on the basis of sex should apply to lesbian, gay, bisexual, transgender and queer people, the protesters outside explained why they need protection.

“These cases are so important to me because I’m a person who has experienced job discrimination because of who I am,” said LaLa Zannell, who said her supervisor at a former job would not accept her as a transgender woman.

“My manager would tell my customers, ‘You know that’s a man, that’s not a woman,’” said Zannell, now a transgender justice campaign manager at the American Civil Liberties Union.

At issue before the Supreme Court was whether gay and transgender people are covered by Title VII of the Civil Rights Act of 1964, which bars employers from discriminating against employees on the basis of sex as well as race, color, national origin and religion.

The Supreme Court heard arguments in three separate related cases, those of Bostock and Stephens as well as the late Donald Zarda, a former New York skydiving instructor whose claim is being pursued by his estate.

Outside the white marble neoclassical Supreme Court building, some of the pro-LGBT rights demonstrators steered clear of detailing their personal stories, saying they still feared that speaking publicly might compromise them in their jobs.

But Zannell, who is African American, has used the discrimination against her as fuel for her activism.

At least 18 transgender people have been homicide victims in the United States this year, most of them black women, according to the Human Rights Campaign advocacy group.

The crowd also included a small group of demonstrators opposing gay and transgender rights holding signs such as “Fear God” and “Sin and shame, not pride.”

“This has to stop. The more and more we give to the homosexual community, the more and more this nation is going to be destroyed,” said Jacob Phelps, 36, from Topeka, Kansas, who held a sign that read, “Jesus will return in wrath.” “It’s very easy in the workplace, shut your mouth, do what you’re supposed to do.”

Supporters of LGBT rights said the fight was about equality.

“This is about whether LGBT workers are going to be treated equally in the workplace, it’s about whether we’re going to allow employers to deny opportunity, to harass, to discriminate people based on who they are and who they love,” said Sasha Butchery, a transgender woman and senior attorney with the pro-LGBT civil rights organization Lambda Legal.

More than half of U.S. states lack explicit LGBT anti-discrimination protections. The Democratic-led U.S. House of Representatives in May passed legislation that would provide anti-discrimination protections for LGBT people and other minorities in employment, housing, credit, education, public spaces and services, federally funded programs and jury service. The Senate, controlled by Trump’s fellow Republicans, has not acted on the bill.

For her part, Zannell said she was trying to transmit “good energy and vibes,” adding that she believed in the principles on which the United States was founded.

“That’s all I can do right now,” Zannell said. “But I do know, whatever the decision, we’re still not going to stop fighting.”

Reporting by Maria Caspani; Writing by Daniel Trotta; Editing by Will Dunham