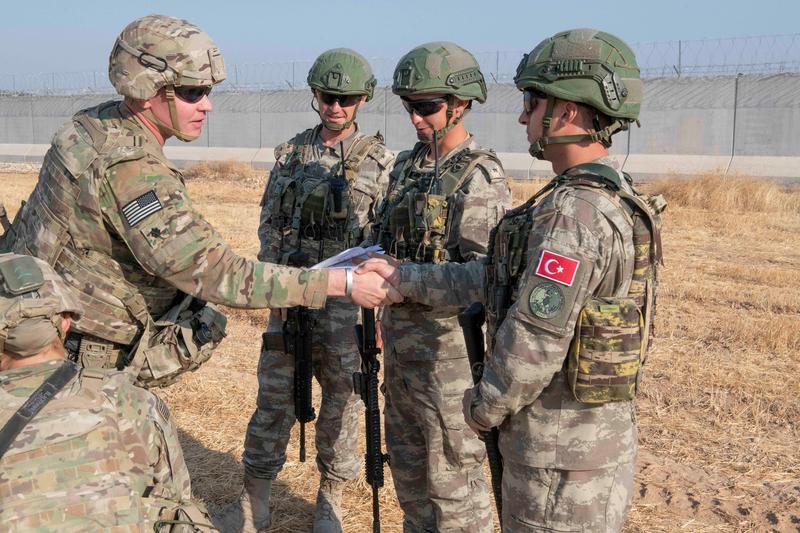 WASHINGTON/ISTANBUL (Reuters) – President Donald Trump on Monday launched a harsh attack on NATO ally Turkey, threatening to destroy its economy if Ankara takes a planned military strike in Syria too far even though the U.S. leader himself has opened the door for a Turkish incursion.

Trump said he would “totally destroy and obliterate” Turkey’s economy if it took action in Syria that he considered “off-limits” following his decision on Sunday to pull out U.S. forces from northeastern Syria.

The U.S. withdrawal will leave Kurdish-led forces in Syria that have long allied with Washington vulnerable to a planned incursion by the Turkish military which brands them terrorists.

Trump’s stern words seemed to be an attempt to placate critics, even from within his own Republican Party, who complain he was abandoning the Syrian Kurds by pulling out U.S. forces.

“As I have stated strongly before, and just to reiterate, if Turkey does anything that I, in my great and unmatched wisdom, consider to be off limits, I will totally destroy and obliterate the Economy of Turkey (I’ve done before!)” Trump tweeted.

Turkey’s lira slid more than 2% to its lowest level in more than a month against the dollar on Monday over concerns about the planned incursion into northern Syria and Trump’s warning.

Investors have been closely watching tense ties between Ankara and Washington in recent months, with the countries at odds over a range of issues, including Syria and Turkey’s purchase of Russian missile defense systems.

Turkey has repeatedly threatened to carry out an incursion against U.S.-backed Kurdish fighters in northeastern Syria who have links to Kurdish guerrillas operating next door in Turkey.

The United States began pulling troops back from the northeast Syrian border on Monday, effectively giving Turkey a green light to move into the area.

“STAB IN THE BACK”

It is a major policy shift that was denounced as a “stab in the back” by Kurdish-led forces who have been Washington’s most capable partners in fighting Islamic State in Syria.

Lindsey Graham, a Republican senator who is generally a vocal Trump supporter, criticized the Syria pullout decision as “impulsive.”

“It’s never in our national security interest to abandon an ally who’s helped us fight ISIS,” Graham said in an interview with Fox News Channel, using an acronym for Islamic State, which has suffered significant battlefield losses to a U.S.-led coalition in the area.

“This impulsive decision by the president has undone all the gains we’ve made, thrown the region into further chaos,” Graham said.

France warned that the U.S. decision to withdraw from northeastern Syria could open the door to a revival of Islamic State.

“We are going to be extremely careful that this announced disengagement from the United States and a possible offensive by Turkey does not create a dangerous maneuver that diverts from the goal we all pursue – the fight against Islamic State – and which is dangerous for the local population,” France’s armed forces minister, Florence Parly, told reporters.

The captives are held in SDF facilities south of a safe zone initially proposed by Turkey.

Aside from Trump’s threat, the State Department official and the Pentagon both said the United States did not endorse Turkey’s planned offensive.

“We made it clear (to the Turks) that we do not support this operation,” the official told reporters. “We think this operation is a very bad idea.”

U.S. relations with Turkey under Trump have been rocky.

Last year, he imposed tariffs on Turkish steel and aluminum products over Ankara’s detention of a U.S. pastor whose case was supported by members of his Christian conservative base.