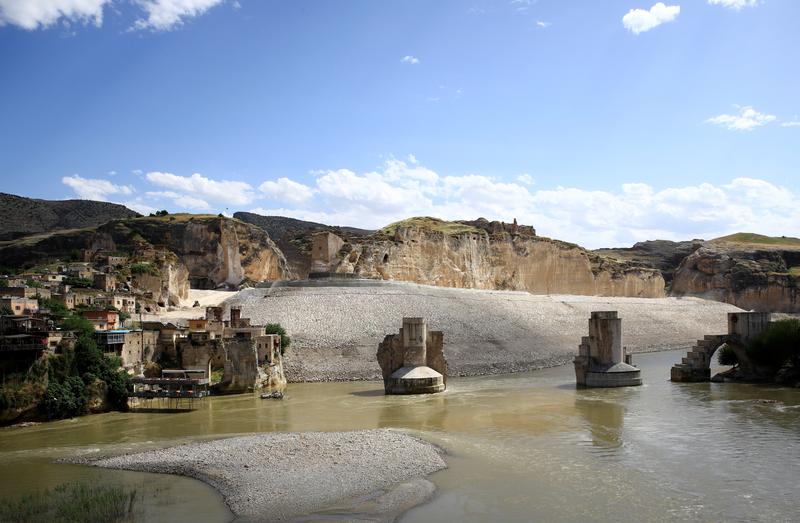 HASANKEYF, Turkey (Reuters) – In the ancient Turkish town of Hasankeyf, the Ozturk family are selling all the livestock that was their livelihood as they prepare to uproot to government-built housing across the Tigris River before the waters rise.

A general view of the ancient town of Hasankeyf by the Tigris river, which will be significantly submerged by the Ilisu dam being constructed, in southeastern Turkey, June 1, 2019. REUTERS/Umit Bektas

They are among around 3,000 residents of the town who are being forced to leave by an Oct. 8 deadline to make way for the Ilisu Dam, a project two decades in the making that will generate electricity for southeast Turkey.

Standing in the entrance of her house, where the family’s belongings have been piled up for the move, Sabahat Ozturk, 39, said their new apartment is not ready but they will try to move out as soon as possible.

Like many others in Hasankeyf, which dates back 12,000 years, the Ozturks have been dependent on livestock farming and worry about how they will make a living in their new home.

“They took our place from us, and are forcing us to sell our herd (of sheep),” Sabahat’s father-in-law, 85-year-old Kerem Ozturk, said of the central government. “We could take care of our animals here, we were able to make ends meet. Now we have to sell them.”

Not all of Hasankeyf’s residents will have moved out by Tuesday’s deadline and authorities will need to extend it, residents and activists say, further delaying the project that has faced numerous setbacks since it was launched more than 20 years ago.

In July, Turkey finally started to fill the dam further downstream on the Tigris where villages have already been vacated and are now partially submerged. Water is expected to start rising in Hasankeyf, located in the southeastern province of Batman, in the next few months.

The Ilisu Dam, expected to be operational for 50 years, will generate 1,200 megawatts of electricity, making it Turkey’s fourth-largest dam in terms of energy production. But it has been criticized by activists who say the dam, once completely filled, will have displaced 78,000 people from 199 surrounding villages and risks creating water shortages downstream in Iraq.

Hasankeyf was used by the Romans as a fortress town to ward off Persians. The town was later destroyed by Mongols and rebuilt in the 11th century by Seljuk Turks.

The Ozturks’ home is perched on a ledge on a cliffside. It has a clear view of works to construct a wall below the ancient Hasankeyf fortress, which dates back to the 4th century BC.

Below their home, archaeologists are working on a digging site, while above the wall, lie caves where people used to live.

The Ozturk family have been allocated an apartment in Yeni Hasankeyf – or New Hasankeyf – across the river from the old town where a hospital, an elementary school and government buildings are already up and running. Parks and playgrounds for children have also been built and trees planted.

In a bid to attract tourists to the area, eight historic structures, including a massive tomb, an ancient Turkish bath, a historic mosque and its minaret, have been moved from the old town to Yeni Hasankeyf.

The head of the Hasankeyf Cultural Foundation, Ahmet Akdeniz – or Ahmet the Shepherd as he is known to locals – has moved into a house in Yeni Hasankeyf but remembers living in the caves as a child, sitting by a fireplace to eat and warm up, before people started moving to homes in the old town in the 1970s.

Akdeniz, 52, supports the Yeni Hasankeyf project and believes it will increase tourism in the area.

But while the houses look pristine from the outside, they were made with low-quality building materials and residents have issues with the water supply, he said.

“Water is leaking everywhere except from the tap!” he says.

Some people who have already moved to Yeni Hasankeyf have built coops outside their apartment buildings for their chickens, although the town is mostly empty and still under construction.

“What are we going to do without a job?” says Cemil Yavanas, 57, as he carries disassembled wardrobes out of his house in Hasankeyf old town. He makes a living selling vegetables but will have no land once he moves to the new town.

Further down the Tigris River the village of Celikkoy, located 15 km (9.3 miles) north of the dam in the southeastern province of Mardin, is almost fully submerged by the rising waters.

The government started filling the dam in July without notifying anyone in advance, said Mehmet Selim Acar, 65, who has remained in Celikkoy, moving into a dilapidated former gendarmerie command post without electricity on a hill above the village.

The other residents have all left, but Acar, who also has an apartment in Batman, wanted to stay because his ancestors lived in the village. Since he retired from his job at a government office, he has made a living from agriculture.

“I had one ton of pomegranates, pears, 5-6 tonnes of grapes. I had to leave them,” he said, recalling when his old home was flooded. “There was nowhere I could go to to file a complaint.”