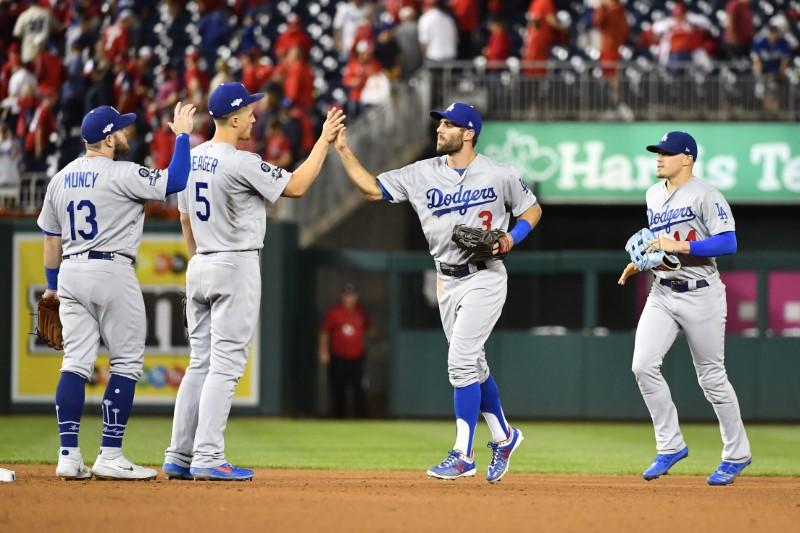 The Los Angeles Dodgers erupted for seven runs in the sixth inning and never looked back, beating the host Washington Nationals 10-4 in Washington, D.C., on Sunday night to take a 2-1 National League Division Series lead.

The outburst, which began with the Dodgers trailing 2-1, included two-run doubles from Russell Martin and Enrique Hernandez, and a three-run home run from Justin Turner. Martin added a two-run homer in the ninth to finish 2-for-4 with four RBIs.

Juan Soto homered for Washington, which will turn to veteran right-hander Max Scherzer in a win-or-go-home contest at home Monday in Game 4. The Dodgers will go with 39-year-old lefty Rich Hill.

Nationals left-hander Patrick Corbin (0-2) took the loss in relief after surrendering six runs and recording only two outs. He followed starter Anibal Sanchez, who allowed only one run on four hits in five innings while striking out nine and walking two.

“You don’t plan for seven-run innings,” Dodgers manager Dave Roberts told reporters after the game. “But after the first five (innings against Sanchez) tonight and to see us get back to what we do best, it was really good to see.”

The Nationals opened the scoring on Soto’s two-run blast in the first. The 20-year-old belted a high fastball 408 feet to center field for his first career postseason homer.

In the fifth, the Dodgers trimmed the deficit to 2-1. Max Muncy had two strikes against him when he ripped a 398-foot shot to right-center field for his second homer in as many games.

Martin gave the Dodgers a 3-2 lead when he drilled a two-out, two-run double off Corbin in the sixth — also with a two-strike count. The hit to left-center field drove in Cody Bellinger and David Freese, both of whom had singled (Bellinger on a 3-2 count).

The inning quickly got away from Corbin, who walked Chris Taylor before giving up a two-run double to Hernandez on a 1-2 count that increased the Dodgers’ lead to 5-2. He then intentionally walked Muncy. That spelled the end of the night for Corbin in his first relief appearance since 2017.

Nationals manager Davey Martinez brought in right-hander Wander Suero to face Turner with two on and two out. With the count full, Turner crushed a three-run homer over the wall in left-center field to make it 8-2.

“Yeah, it was frustrating,” Martinez said of the Dodgers doing so much damage with two strikes. “The 0-2 (count), couldn’t put guys away, it was tough. Not taking nothing against those guys, they’ve got pretty good hitters, but we’ve got some pretty good pitching. We got 0-2 and we just couldn’t finish.”

A wild pitch by Dodgers right-hander Joe Kelly with the bases loaded allowed Washington to score a run in the bottom of the sixth. Two batters later, a sacrifice fly by Asdrubal Cabrera cut the deficit to 8-4.

Martin capped off his big night with a two-run homer in the ninth.