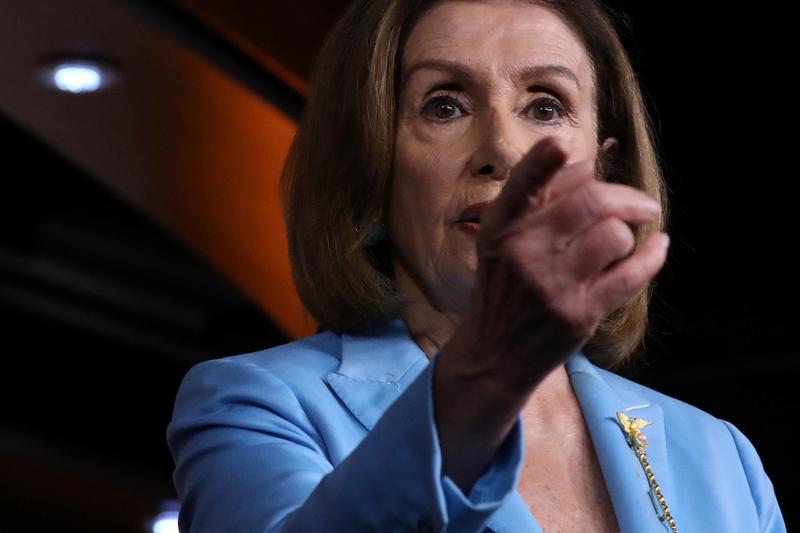 Speaker of the House Nancy Pelosi speaks about Democratic legislative priorities and impeachment inquiry plans during her weekly news conference at the U.S. Capitol in Washington, U.S., October 2, 2019. REUTERS/Jonathan Ernst

The three House of Representatives committees leading the inquiry said the Department of Defense and the White Office of Management and Budget must turn over the documents by Oct. 15.

“The committees are investigating the extent to which President Trump jeopardized national security by pressing Ukraine to interfere with our 2020 election and by withholding military assistance provided by Congress to help Ukraine counter Russian aggression, as well as any efforts to cover up these matters,” the committee chairmen said in a statement.

The new subpoenas follow those issued to the State Department and White House in recent weeks by the House Intelligence, Oversight and Foreign Affairs Committees.

Democrats have called a number of U.S. diplomats to Capitol Hill for closed-door testimony this week as they build their impeachment case against Trump, while the White House considers ways to slow down the process.

The interviews follow a whistleblower’s allegations that Trump leveraged $400 million in aid to secure a promise from Ukrainian President Volodymyr Zelenskiy to investigate political rival Joe Biden, and his son Hunter, who sat on the board of a Ukrainian energy company.

The taxpayer funds had been approved by Congress to help Ukraine protect against Russian aggression.

Trump has denied wrongdoing and assailed the probe.

Those scheduled to testify this week include Gordon Sondland, the U.S. ambassador to the European Union who was involved in efforts to get Ukraine to open the Biden investigation, and Masha Yovanovitch, who was abruptly recalled from her post as U.S. ambassador to Ukraine in May after Trump supporters questioned her loyalty to the president.

The White House could formally tell House of Representatives Speaker Nancy Pelosi as early as Monday that it will ignore lawmakers’ demands for documents until the Democratic-controlled House holds a vote to formally approve the impeachment inquiry.

Pelosi says a vote is not needed. Democrats say she would prevail if one were held, although very few Republicans would be expected to side with the Democratic majority. Congress returns to Washington on Oct. 15 after a two-week recess.

The impeachment investigation could lead to the approval by the House of formal charges against Trump.

A trial on whether to remove him from office would then be held in the Republican-controlled Senate, but few Republicans have broken ranks with Trump so far for asking Ukraine and China to launch investigations of Biden, a former vice president and a leading contender for the Democratic nomination to face Trump in the November 2020 presidential election.

On Sunday, lawyers said a second whistleblower had come forward to substantiate an August complaint from an unidentified U.S. intelligence official, which touched off the investigation.

A bipartisan group of about 90 former national security officials on Sunday called on federal officials and media outlets to protect the initial whistleblower’s identity, citing protections under the law, even as Trump has publicly sought for it to be revealed.

Diplomatic text messages released by Democrats last week show that U.S. officials were involved in the effort to secure a public commitment from Ukraine to look into the business dealings of Hunter Biden.

Trump has alleged that Hunter Biden profited in his business dealings in both Ukraine and China from his father’s position, and that Joe Biden, as vice president, pushed Ukraine to fire a prosecutor to impede a probe of a company tied to his son.

However, the prosecutor in question was widely regarded by Washington and its European allies as being too lax in his investigations. There has been no evidence of wrongdoing on the part of either Biden.

Sondland is scheduled to testify on Tuesday before the three House committees leading the impeachment probe, and Yovanovitch is due to appear on Friday.