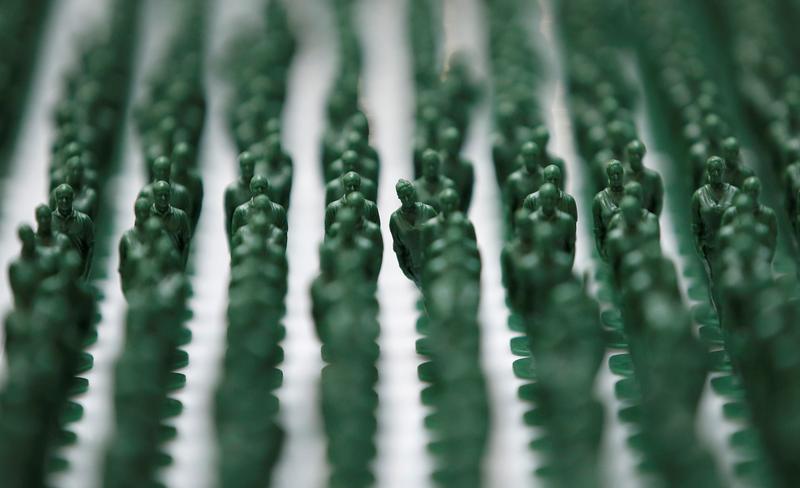 Some of the 40,000 3D printed plastic figures are seen on display as part of an installation by veterans charity Help for Heroes to highlight the number of veterans medically discharged from the armed forces over the last 20 years in Manchester, Britain October 7, 2019. REUTERS/Phil Noble

MANCHESTER, England (Reuters) – An installation of 40,000 miniature toy soldiers in a shopping centre in Manchester, northern England, highlights the plight that many British soldiers face if their careers are ended by injury.

The small green plastic figures represent the number of veterans that have been medically discharged over the last 20 years and campaigners say more should be done to support them.

Seven of the figures, placed at the front of the installation in Manchester’s Arndale Centre, are models of real veterans who have had amputations or been left in wheelchairs after serving in the armed forces.

“Injuries have ended 40,000 military careers in 20 years and every day this number grows. Many of them tell us that their transition impacted significantly on their health, wellbeing and family,” Mel Waters, chief executive of Help for Heroes, said in a statement.

“The medical discharge process is seriously failing those who are let down by major inconsistencies in support, so we’re calling on the government to commission an independent review of the process to close those gaps.”

British troops have been deployed in countries including Iraq, Afghanistan and Sierra Leone over the last 20 years.

However, Help for Heroes says that over 10,000 men and women have been discharged on medical grounds since the end of combat operations in Afghanistan in 2014, even though British Armed Forces have not been engaged in active conflict in that period.

A survey conducted on behalf of the charity found that 70% of those discharged said the transition to civilian life was a negative experience.

About 40% percent of the 403 surveyed said the transition period was not long enough, while nearly half said they were discharged without a full diagnosis for their injury or illness.