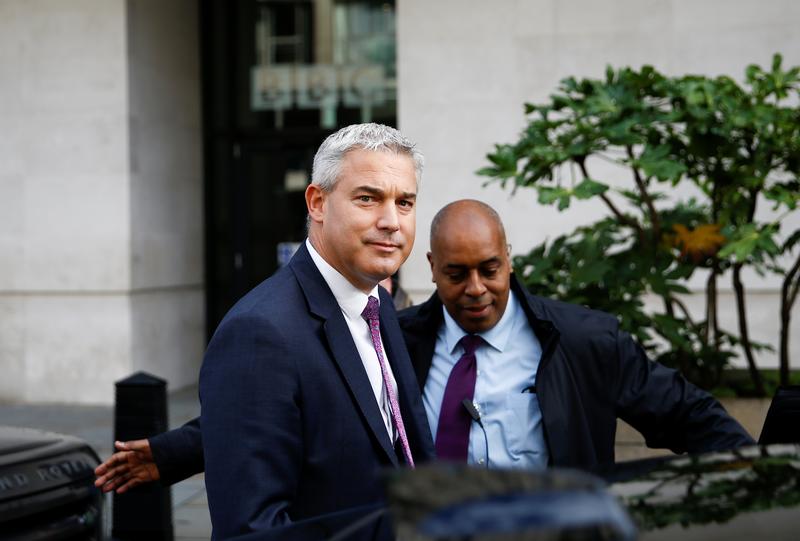 LONDON (Reuters) – Britain is open to some flexibility on the proposed mechanism that would allow lawmakers in post-Brexit Northern Ireland to decide whether the British province remains in regulatory alignment with the European Union, its Brexit minister said.

The mechanism, set out in London’s latest Brexit proposals, aims to resolve the biggest sticking point in negotiations: the currently seamless border between Northern Ireland and Ireland.

“The key issue is the principle of consent, that’s why the backstop was rejected three times, that was the concern in terms of both sides in Northern Ireland not approving of the backstop,” Stephen Barclay told the BBC’s Andrew Marr on Sunday.

“So the key is the principle of consent, now of course in the mechanism, as part of the intensive negotiations we could look at that and discuss that.”

The 500 km (300 mile) border will be the United Kingdom’s only land frontier with the bloc after it leaves.

The problem is how to prevent Northern Ireland becoming a “back door” into the EU’s single market and customs union without erecting border controls that could undermine the 1998 Good Friday Agreement, which ended decades of political and sectarian violence in Northern Ireland in which more than 3,600 people were killed.

British Prime Minister Boris Johnson has said he cannot accept the so-called backstop arrangement included in the Withdrawal Agreement negotiated with the EU by his predecessor Theresa May, which British lawmakers rejected three times.

He made what he called a final Brexit offer to the European Union on Wednesday which centres on replacing the backstop with a proposal for an all-island regulatory zone to cover all goods.

The proposal also says the legislative assembly in Northern Ireland — which has been suspended since 2017 — would have the right to decide every four years whether it wants to continue to abide by EU rules on traded goods.

The European Union and Ireland, however, said the proposals were unlikely to result in a deal without more concessions.

Irish Prime Minister Leo Varadkar said he did not fully understand how the British proposals might work and that Dublin could not sign up to a treaty that did not safeguard an open Irish-British border.

His deputy, Simon Coveney, said giving the Northern Ireland Assembly a vote on single market alignment would in effect give a veto to any one party.

He also raised concerns about the proposed customs arrangements that would require checks and controls even if, as proposed, they do not take place at or near the border.

Barclay said Britain was willing to discuss the detail of customs proposals, adding: “We have set out a broad landing zone, in the detail of the negotiations, of course we can get into the details of how operationally they work, what legal certainty is required.”

Writing in the Sun on Sunday newspaper, Johnson said the proposals were a “practical compromise that gives ground where necessary while still protecting the UK’s interests and the Brexit this country voted for”.

He said lawmakers from every wing of his Conservative Party, from his allies in Northern Ireland’s DUP and even from the opposition Labour Party had said they could get behind the deal.

“And I salute the spirit of compromise from MPs on all sides who have looked at what’s on the table, reflected on what’s best for their constituents, and decided they are willing to put aside their personal beliefs and back the deal that they know will get Brexit done,” he said.

“The President told him that the negotiations should continue swiftly with Michel Barnier’s team in coming days, in order to evaluate at the end of the week whether a deal is possible that respects European Union principles,” the official said.

Johnson said in the Sun on Sunday that Britain could do a deal if the EU was willing.

“But they should be under no illusions or misapprehensions,” he said. “There will be no more dither or delay. On Oct. 31 we are going to get Brexit done.”

With the deadline approaching, Johnson has consistently said he will not ask for another delay to Brexit, but also that he will not break a law that forces him to request one if no withdrawal deal has been agreed by Oct. 19. He has not explained the apparent contradiction in his comments.

The government acknowledged for the first time on Friday that Johnson will send a letter to the EU asking for a Brexit delay if no divorce deal has been reached.