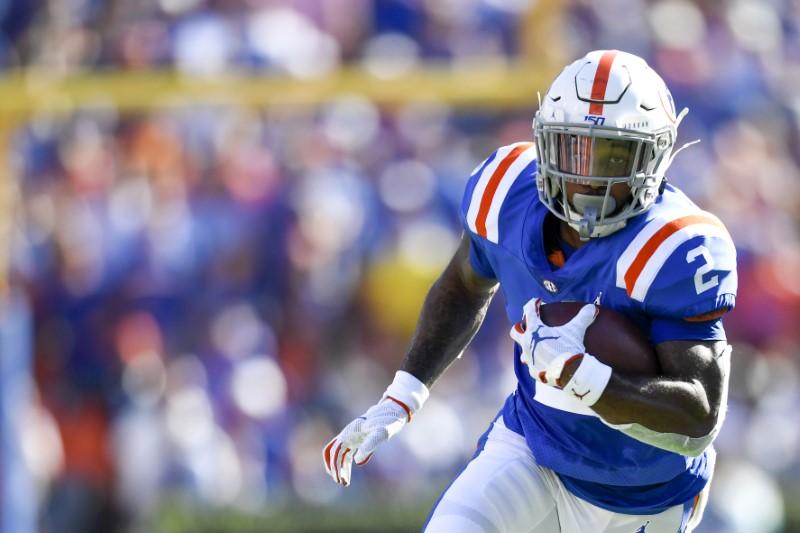 Lamical Perine’s 88-yard touchdown run in the fourth quarter gave No. 10 Florida the cushion it needed to ride out a 24-13 victory against No. 7 Auburn in an SEC clash Saturday in Gainesville, Fla.

Perine’s dash gave the Gators (6-0, 3-0 SEC) an 11-point lead with 9:04 to play, and their defense did the rest. The win was their eighth in their last 10 home games against Top 10 opponents and extended their overall winning streak to 10 games.

The Tigers (5-1, 2-1) struggled offensively, held to about half of their season average of 251 rushing yards per game.

Bo Nix completed only 11 of 27 passes and threw three interceptions, his first since the opener. His second pick was critical, coming late in the third quarter on third-and-12 at Florida’s 15-yard line with his team within 17-13. His third came with 2:30 remaining.

Joe Burrow threw five touchdown passes to increase his season total to 22 as the Tigers finished their nonconference schedule against the Aggies in Baton Rouge, La.

Burrow completed 27 of 38 passes for 344 yards with one interception. Justin Jefferson caught nine of those tosses for 155 yards and two touchdowns, both in the third quarter as the Tigers extended a 21-6 halftime lead to 35-6 after three quarters.

Jalen Hurts sparkled again, passing for 228 yards and two touchdowns, rushing for 56 yards and two scores, and even hauling in a 21-yard pass as the Sooners rolled past the Jayhawks in Lawrence, Kan.

The Alabama transfer overcame a slow start to boost the Sooners (5-0, 2-0 Big 12) to their 22nd consecutive road win, the longest active streak in the FBS.

Hurts padded his season total of touchdowns accounted for to 21, while Rhamondre Stevenson added 109 yards rushing, including a 61-yard touchdown. Oklahoma produced 545 yards against Kansas (2-4, 0-2) after coming in as the national leader in yards per game (668.5).

Junior running back Jonathan Taylor scored a career-high five touchdowns and rushed for 186 yards as the Badgers pounded the Golden Flashes in a nonconference game in Madison, Wis.

Taylor, a Heisman Trophy hopeful, rushed for four touchdowns on 19 carries. He also caught three passes for 29 yards and a touchdown against Kent State (2-3). Taylor surpassed the 100-yard rushing milestone for a fifth straight game and the 27th time in 32 career games.

Ian Book completed 16 of 20 passes for 261 yards and five touchdowns as the Fighting Irish cruised to a shutout of the Falcons in South Bend, Ind.

Bowling Green (1-4) dropped its fourth consecutive game. The Falcons were outgained 573-228 in the first meeting between the programs.

Sam Ehlinger passed for 211 yards and two touchdowns and ran for two more scores as the Longhorns topped the Mountaineers in Morgantown, W. Va.

The Longhorns’ defense forced West Virginia (3-2, 1-1) into four turnovers, all of them interceptions of Austin Kendall passes. D’Shawn Jamison made two of them, both in spectacular fashion.

Sean Clifford threw for three touchdowns and rushed for another on his first four drives as the Nittany Lions cruised over the Boilermakers in University Park, Pa.

Clifford completed 20 of 29 passes for 264 yards while throwing touchdown passes to Jahan Dotson, KJ Hamler and tight end Pat Freiermuth. Noah Cain capped a 105-yard rushing performance by scoring from 2 yards out in the fourth quarter for Penn State (5-0, 2-0 Big Ten), which enjoyed a 460-104 edge in total yards.

Purdue redshirt freshman quarterback Jack Plummer received the start in place of injured Elijah Sindelar (broken clavicle) and completed 13 of 27 passes for 119 yards and a touchdown for the Boilermakers (1-4, 0-2).

The Wolverines forced four turnovers and recorded eight sacks as they handed the Hawkeyes their first loss of the season in Ann Arbor, Mich.

Michigan (4-1, 2-1 Big Ten) scored all its points in the first quarter and held firm by harassing Iowa quarterback Nate Stanley all afternoon. Stanley was intercepted three times after throwing zero picks in the first four games for the Hawkeyes (4-1, 1-1).

The Wolverines took a 3-0 lead on Jake Moody’s 28-yard field goal with 12:19 to go in the first quarter. They scored the only touchdown of the game on their next possession when Zach Charbonnet rushed in from 2 yards to cap a 70-yard drive.

Jett Duffey passed for 424 yards and accounted for five touchdowns in his fourth career start as the Red Raiders upset the Cowboys in Lubbock, Texas.