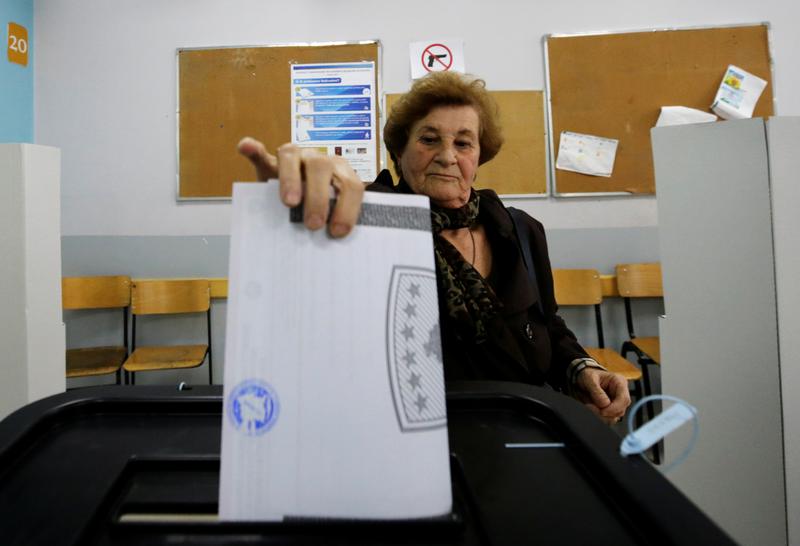 PRISTINA (Reuters) – The opposition leftist Vetevendosje party was set to come in first in Kosovo’s parliamentary poll, but it will have to negotiate a coalition to form a government.

According to preliminary results based on 82% of the votes counted, Vetevendosje (Self-determination) won 26% of the votes, while another opposition party – the center-right Democratic League of Kosovo (LDK) – won 25% of the votes.

During the campaign, LDK and Vetevendosje leaders said they would form a ruling coalition together. But to make it stable they will need either another party or support of minorities – Serbs, Turks, and Bosniaks – who together have 20 seats in the parliament.

The election, the fourth since Kosovo’s declaration of independence in 2008, was called after Prime Minister Ramush Haradinaj resigned in July when he was summoned to appear before a war crimes court.

He has been questioned over his role in the 1998-99 war as one of the commanders of the former Kosovo Liberation Army (KLA), which fought for independence from Serbia. He denies wrongdoing.

Whoever ends up running Kosovo next will have to face the issue of ties with Serbia, from which it declared independence in 2008. Normalization of ties between the two could help secure Pristina a seat in the United Nations.

‘WE DON’T HAVE TIME TO LOSE’

“I will do the maximum to have the government as soon as possible because we are in the end of the year and we need to pass the budget,” said Vetevendosje leader Albin Kurti, who according to Kosovo law will get the mandate to be the country’s prime minister.

“Tonight I will not knock on the LDK door but I will do the first thing tomorrow. We don’t have time to lose,” Kurti told T7 television.

Opinion polls before the vote pointed to public dissatisfaction with Haradinaj’s record at the head of a three-party governing coalition as boosting support for the opposition, which campaigned on platforms of tackling what they said is deeply rooted corruption.

The Democratic Party of Kosovo (PDK), the largest party in the outgoing coalition, came in third with 21% of the votes, and a list led by Haradinaj got 11.5%, preliminary results showed.

Turnout was 44.05%. The vote count did not include votes from the diaspora, which traditionally go to Vetevendosje mostly.

A woman casts her ballot at a polling center in Pristina, Kosovo, October 6, 2019, REUTERS/Florion Goga

“In essence when people voted for him they mainly thought he is the person to fight crime and corruption, bring jobs and improve the economy,” Agron Bajrami, editor in chief of the Kosovo daily Koha Ditore, told Reuters.

Negotiations between Kosovo and Serbia abruptly stopped a year ago when the outgoing government imposed 100% import tariffs on goods produced in Serbia.

Kurti said his party would abolish the tariffs but will introduce other retaliatory measures against Serbia. Serbian President Aleksandar Vucic said Belgrade would talk to elected Kosovo officials once the tariffs are abolished.

The United States and the European Union see tensions between Belgrade and Pristina as a major threat to regional stability and are pushing for a normalization of relations.

On Thursday, U.S. President Donald Trump appointed Richard Grenell, the straight-talking U.S. ambassador to Germany, as special envoy to try to inject new energy into the talks between Belgrade and Pristina.

Twenty years after NATO bombing expelled Serbian forces, Belgrade refuses to recognize Kosovo as independent and, in concert with its ally Russia, has blocked Pristina’s membership in international organizations, including the United Nations.

In 2013, Pristina and Belgrade agreed to an EU-mediated dialogue to normalize ties but little progress has been made.

The election was overseen by more than 34,000 independent monitors, including 100 from the European Union.

No major incidents were reported but police said they detained at least 20 people for photographing their ballots.