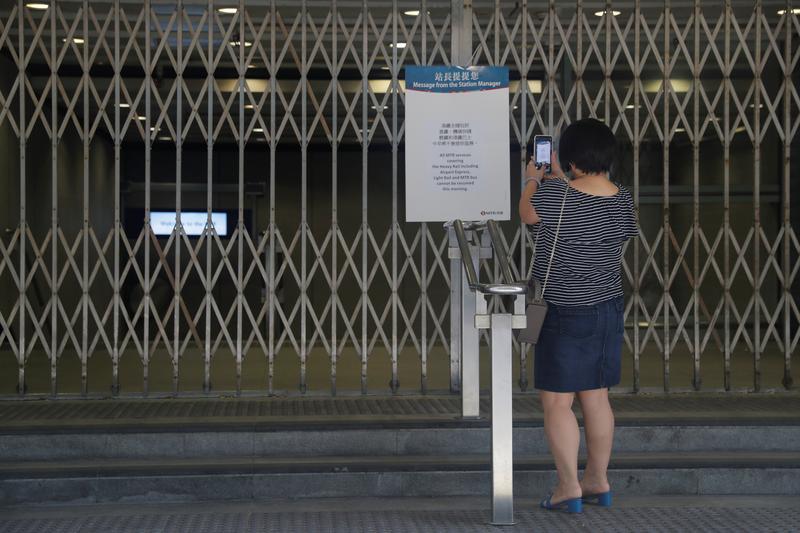 FILE PHOTO: A woman takes a picture of an information board at the suspended metro station in Tsim Sha Tsui district, in Hong Kong, China October 5, 2019. REUTERS/Susana Vera/File Photo

The night’s “extreme violence” justified the use of the emergency law, Beijing-backed Lam said in a television address on Saturday.

The city felt eerily quiet on Saturday with the subway and most shopping malls closed and many roads deserted. Hundreds of anti-government protesters defied a ban on face masks and took to the streets across the city earlier in the day, but by evening they had largely dispersed.

The former British colony has been roiled by increasingly violent protests for four months, which began in opposition to a bill that would have allowed extradition to mainland China but have spiraled into a broader pro-democracy movement.

Hong Kong’s rail operator MTR Corp said that due to serious vandalism some stations will not be opened for service on Sunday, as damaged facilities needed time for repair. Train service would also be shortened to end at 9 p.m., more than three hours earlier than normal.

The operator’s closure on Saturday had largely paralyzed most of the city with its network typically carrying about 5 million passengers a day.

Supermarkets and commercial stores which shuttered on Saturday had mostly reopened by Sunday morning.

Many restaurants and small businesses have had to repeatedly shut with the protests taking a growing toll on Hong Kong’s economy as it faces its first recession in a decade.

Two major protests are planned for Sunday afternoon, one on the island and another on the Kowloon Peninsula with many demonstrators expected to defy a ban on face masks.

Beijing-backed Lam said a ban on face masks that took effect Saturday was ordered under the emergency laws allowing authorities to “make any regulations whatsoever” in whatever they deem to be in the public interest.

The move enraged protesters, who took to the streets on Friday night to vent their anger, many wearing masks in open defiance. Some set fires, hurled petrol bombs at police and burned the Chinese national flag, in a direct challenge to authorities in Beijing.