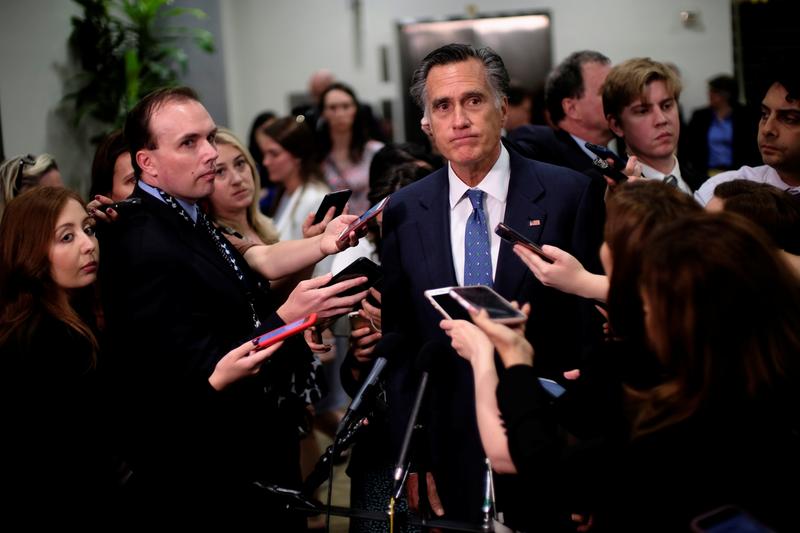 FILE PHOTO: U.S. Senator Mitt Romney (R-UT) speaks to reporters after being briefed on Iran by the Secretary of State and acting Defense Secretary on Capitol Hill in Washington, U.S., May 21, 2019. REUTERS/James Lawler Duggan

“Mitt Romney never knew how to win. He is a pompous ‘ass’ who has been fighting me from the beginning,” Trump wrote of his fellow Republican on Twitter.

Trump once again defended as “appropriate” a July phone call with Ukrainian President Volodymyr Zelenskiy, which has triggered a House of Representatives impeachment inquiry, and said his call for China to investigate Biden and his son Hunter was linked to corruption, not politics.

“If Mitt worked this hard on Obama, he could have won. Sadly, he choked!” Trump wrote. “He is so bad for R’s.”

Romney was the Republican presidential nominee who lost to Barack Obama in the 2012 presidential election. On Friday, Romney said Trump’s actions regarding Biden were “wrong and appalling.”

“When the only American citizen President Trump singles out for China’s investigation is his political opponent in the midst of the Democratic nomination process, it strains credulity to suggest that it is anything other than politically motivated,” Romney said on Twitter on Friday. “By all appearances, the president’s brazen and unprecedented appeal to China and to Ukraine to investigate Joe Biden is wrong and appalling.”