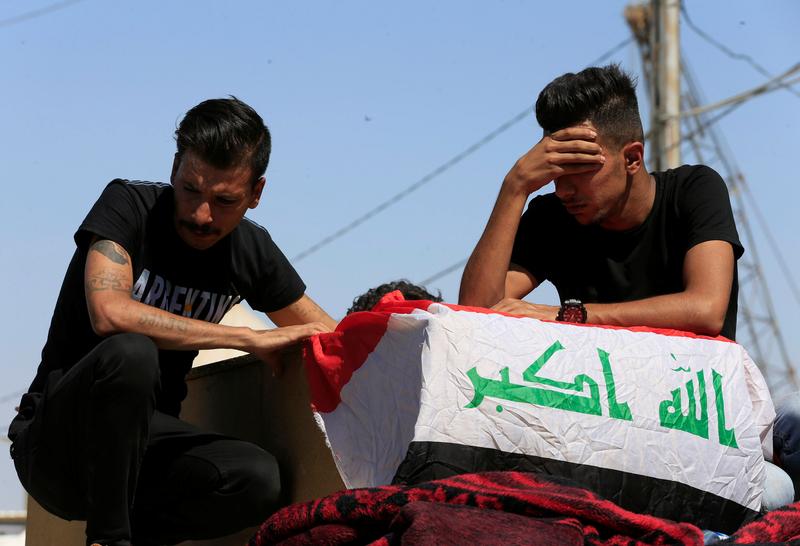 BAGHDAD (Reuters) – Clashes between police and protesters killed five people in Baghdad on Saturday in a resumption of anti-government unrest, as security forces deployed in their hundreds to keep demonstrations away from central squares in the Iraqi capital.

Police and medical sources reported the casualties after days of violence around anti-government protests that killed at least 81 people in Baghdad and other cities earlier this week.

Iraq’s semi-official High Commission for Human Rights put the toll at 94 dead. Reuters could not verify its figures.

The new clashes shattered a day of relative calm after authorities lifted a curfew and traffic moved normally in the center of the city. One square where protesters had gathered in their hundreds in previous was packed with hundreds of policemen and other security personnel.

The unrest is the deadliest Iraq has seen since the declared defeat of Islamic State in 2017 and has shaken Prime Minister Adel Abdul Mahdi’s year-old government. The government has responded with vague reform promises that are unlikely to placate Iraqis.

In the southern city of Nassiriya, where at least 18 people were killed during the week, police fired live rounds at demonstrators, and protesters torched the headquarters of several political parties in the city, police said. These included the headquarters of the powerful Dawa party that dominated Iraq’s government from 2003 until 2018 elections.

Iraqi men mourn over the coffin of a demonstrator who was killed at anti-government protests, during a funeral in the holy city of Najaf, Iraq October 5, 2019. REUTERS/Alaa al-Marjani

Iraqi state television meanwhile broadcast live footage of a meeting between the parliament speaker and what it said were protest leaders. The speaker on Friday proposed improving public housing for the poor and job opportunities for young people, as well as holding those who had killed protesters to account.

ANGER AT GRAFT, LACK OF SERVICES

Authorities did not say why the curfew was lifted.

The High Commission for Human Rights said security forces had detained hundreds of people for demonstrating but then let most of them go. It said more than 3,000 people had been wounded in days of violence.

The security forces have accused gunmen of hiding among demonstrators to shoot at police. Several policeman have died.

The protests over unfair distribution of jobs, lack of services and government corruption erupted on Tuesday in Baghdad and quickly spread to other Iraqi cities, mainly in the south.

A curfew in Dhi Qar province, where protesters were also killed this week, was ordered by local authorities starting from 1 p.m.

Powerful Iraqi cleric Moqtada al-Sadr, who has a mass popular following and controls a large chunk of parliament, demanded on Friday that the government resign and snap elections be held. At least one other major parliamentary grouping allied itself with Sadr against the government.

Parliament was set to meet on Saturday to discuss protesters’ demands. Sadr’s bloc has said it will boycott the session.