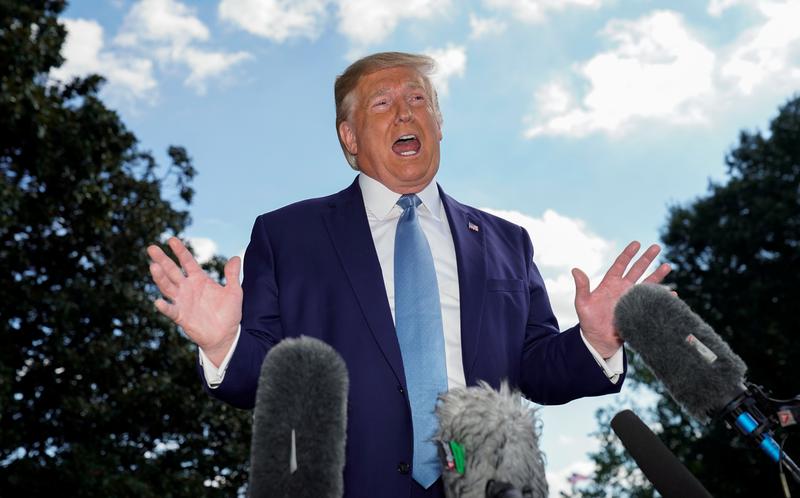 U.S. President Donald Trump talks to reporters as he heads to the Marine One helicopter to fly form the South Lawn to visit injured members of the U.S. military at Walter Reed National Military Medical Center from the White House in Washington, October 4, 2019. REUTERS/Kevin Lamarque

WASHINGTON (Reuters) – U.S. President Donald Trump said on Friday he would not tie a much-anticipated trade deal with China to his publicly stated desire for Beijing to investigate former Vice President Joe Biden, a potential rival in the 2020 presidential election.

Speaking to reporters before departing the White House, Trump said negotiations to end the U.S. trade war with China were separate from any investigation into Biden, who Trump has accused of foreign corruption.

“One thing has nothing to do with the other,” the Republican president said when asked whether he would be more likely to make a deal with China if it investigated Biden. “I want to do a trade deal with China, but only if it’s good for our country.”

On Thursday Trump publicly urged Beijing to investigate Biden, a Democrat, again raising concerns that he has invited foreign interference in the U.S. presidential election. Last week Trump released a transcript of a call where he asked Ukraine’s president to also look into Biden, a request that has triggered a congressional inquiry into whether he should be impeached.

Trump confirmed on Friday he would send a letter to House of Representatives Speaker Nancy Pelosi requesting that the chamber hold a full vote to formally approve the inquiry, a move that could slow the process down.