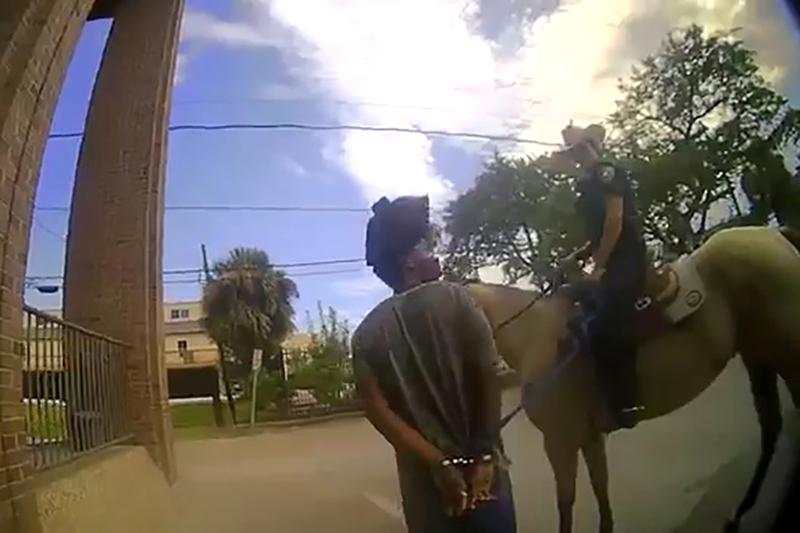 (Reuters) – One of two white police officers who rode through the streets of Galveston, Texas, on horseback escorting a black man walking tethered to a rope is heard saying: “This is going to look really bad” in newly released police video footage of the incident.

The spectacle was caught on body cameras worn by the two officers during their Aug. 3 trespassing arrest of Donald Neely, who family lawyers have said is known to city police as someone who suffers from mental illness and regularly sleeps on the streets.

A still photo of the arrest captured by an onlooker and posted on social media went viral, prompting a public outcry.

The bodycam videos, publicly released on Wednesday, shed additional light on the two officers’ encounter with Neely as they took in him into custody using a procedure that mounted police in their department were trained to employ when no transport vehicle was available.

At one point, officer Amanda Smith, seen leading Neely on a blue nylon rope she has fastened to his handcuffs, cautions him to “stop” at an intersection and to “stay next to me, because I’m gonna drag you if not.”

Her patrol partner, Patrick Brosch, at least twice voices discomfort at the appearance of what they are doing, saying at the outset: “This is going to look really bad.”

Neely, forced to trudge several blocks between the horses with his hands cuffed behind him, was eventually handed over to another officer with a patrol car at an outdoor staging area.

Brosch and Smith have been placed on “modified duty” pending Galveston Police Chief Vernon Hale’s review of a report on the incident submitted by the county sheriff earlier this week, city spokeswoman Marissa Barnett told Reuters on Thursday.

A separate Texas Department of Public Safety review determined no criminal investigation of the officers was warranted. But Hale will decide whether any disciplinary or other actions should be taken, Barnett said.

Days after the incident, Hale said Brosch and Smith had used a “trained technique” in escorting Neely but exercised poor judgment in doing so and could have waited for vehicular transport to become available.

Barnett said the chief also has suspended all mounted police patrols in Galveston, a Gulf Coast island resort city and port southeast of Houston. She said the city typically uses mounted police for ceremonial events and crowd control only but was trying out horseback patrols on busy summer weekends.

Community activists and lawyers for Neely’s family have demanded decisive action to prevent a repeat of police conduct they said was an insult to the dignity of all African-Americans.

“When they dragged Donald Neely down that road by horses and rope, it was like they were dragging our entire community down the road,” Ben Crump, president of the National Civil Rights Trial Lawyers Association, said in an appearance with other supporters in August.