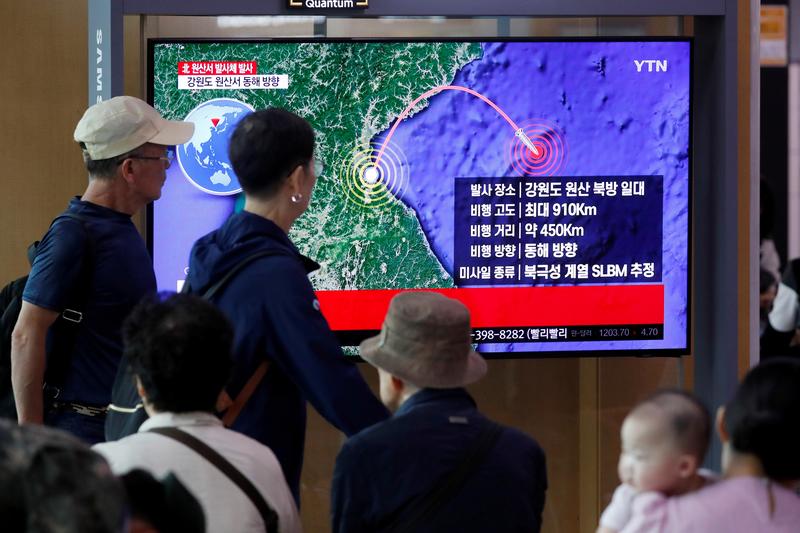 SEOUL (Reuters) – As negotiators for the United States and North Korea resume talks over Pyongyang’s nuclear program this weekend, analysts say that the leaders of both countries face increased incentives to strike a deal, but that it is far from clear they will find common ground after months of deadlock and increased tensions.

FILE PHOTO: People watch a TV broadcasting a news report on North Korea firing a missile that is believed to be launched from a submarine, in Seoul, South Korea, October 2, 2019. REUTERS/Kim Hong-Ji

The meeting in Stockholm will be the first formal working-level talks since U.S. President Donald Trump and North Korean leader Kim Jong Un met in June, vowing to restart negotiations that had stalled after their failed summit in February.

Since June, however, American officials have struggled to persuade North Korea to return to the table.

That appeared to change this week when North Korea abruptly announced that it had agreed to hold talks.

The stakes have grown for Trump and Kim, but publicly the two sides have shown no sign of where they may compromise.

On Wednesday North Korea test fired a ballistic missile designed for submarine launch, the latest in a series of missile tests that analysts say underscores the need for Washington to move quickly to negotiate at least some limits on Pyongyang’s growing arsenal.

Trump continued to downplay the test in remarks to reporters in Washington, noting that the two sides would soon be meeting.

North Korea is under tough sanctions that ban much of its trade, although the United Nations has warned that the country has circumvented many of the sanctions.

Biegun has often struck a more pragmatic note than former national security adviser John Bolton, who pushed Trump to maintain a harder line in Hanoi but was fired last month.

Policy analysts said Bolton’s departure could help U.S. efforts to revive the talks. But, they said, it would not make Washington’s aim of persuading Pyongyang to give up its nuclear weapons any easier.

The North Korean delegation will be led by its former ambassador to Vietnam, Kim Myong Gil, who stepped in after his predecessor was reportedly removed in a diplomatic shakeup.

“There’s been a new signal from the U.S. side, so we’re going with great expectations and optimism about the outcome,” Kim told reporters in Beijing before boarding for Stockholm.

Pyongyang will likely seek a declaration ending the technical state of war that has existed since the 1950-1953 Korean War, opening liaison offices with the United States, and possibly economic aid, said Professor Ramon Pacheco Pardo at King’s College London, who has met with North Korean officials as part of separate semi-official discussions.

But sanctions relief will be at the top of the list for the North Koreans because Kim Jong Un needs to show he is winning material benefits from Washington, Pacheco Pardo said.

“North Korea will want sanctions relief, however partial and even if it is the form of their interruption rather than full removal,” he said. “From Pyongyang’s perspective, that would show that the U.S. is serious about a step-by-step process.”

Any agreement at the working-level talks would likely be finalised at yet another summit between Trump and Kim, who have pinned hopes for a breakthrough on their personal relationship.

The most visible and longest-running part of North Korea’s nuclear program, the Yongbyon nuclear complex, is a central point of contention.

South Korean officials have pressed Washington to accept the closure of Yongbyon in return for lifting at least some sanctions, arguing it would be a significant step toward curtailing North Korea’s ability to build more nuclear weapons. Some observers, however, question how useful Yongbyon is.

Nuclear experts and American officials have estimated that North Korea may have had the material necessary to build up to a dozen more warheads since talks with the United States in early 2018.

Kim offered to close the facility during the February summit with Trump, but American officials said he wanted too many sanctions lifted in exchange.