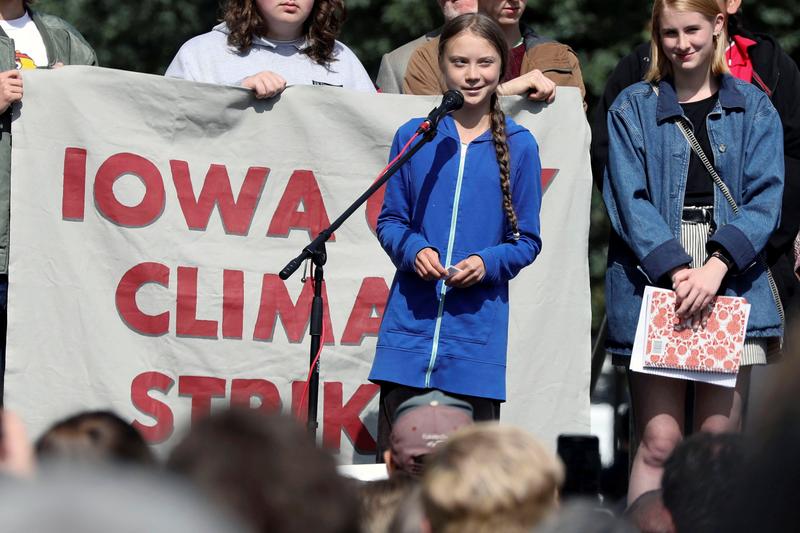 “As we all know, the UN Climate Action Summit was a failure,” the 16-year-old Swede told a cheering crowd just off the campus of the University of Iowa. “No matter what, we need to continue,” Thunberg told an adoring crowd that welcomed her with chants of “Greta, Greta.”

Hundreds of demonstrators gathered at the rally to listen to the Swedish activist. Some held signs with slogans such as “If you breathe the air you should care” and “Science not silence.”

Thunberg’s campaign began as a lonely vigil outside the Swedish parliament but rapidly grew into a global movement of activists demanding urgent action on climate. In recent weeks, millions poured onto streets around the globe in protests and Thunberg addressed the United Nations on the issue last month.

“She is the face of climate change,” said Lena Kosinski, a 21-year-old student at the University of Iowa. “It’s nice to have not only a young person, but a female leading the change.”

Activists at the rally renewed calls for the University of Iowa to cease operations of its coal-burning plant. Iowa City Mayor Jim Throgmorton said pressure from the young activists had been instrumental in speeding up efforts toward a local action plan to tackle climate change.

A polarizing figure in the climate change debate, Thunberg is venerated by many peers and ridiculed by some critics. She is the odds on favorite to win the Nobel Peace Prize this month, though her aggressive style may turn off some on the Nobel committee.

Thunberg denounced world leaders for failing to tackle climate change and accused them of “stealing her dreams” in an impassioned speech at the United Nations Climate Action Summit last month.

Nearly 70 countries announced plans to beef up their Paris climate agreement pledges, but most major economies including the United States and China failed to announce stronger new measures.

Experts said there was a huge gap between what Thunberg demanded in her opening remarks and youth called for on the streets and what world leaders announced at the summit.

With events such as extreme weather, thawing permafrost and sea-level rise unfolding much faster than expected, scientists say the urgency of the climate crisis has intensified since the signing of the Paris accord in 2015.

U.S. President Donald Trump intends to pull the United States out of the international deal that aims to reduce carbon emissions. Under terms of the pact, that cannot formally happen before Nov. 4, 2020.