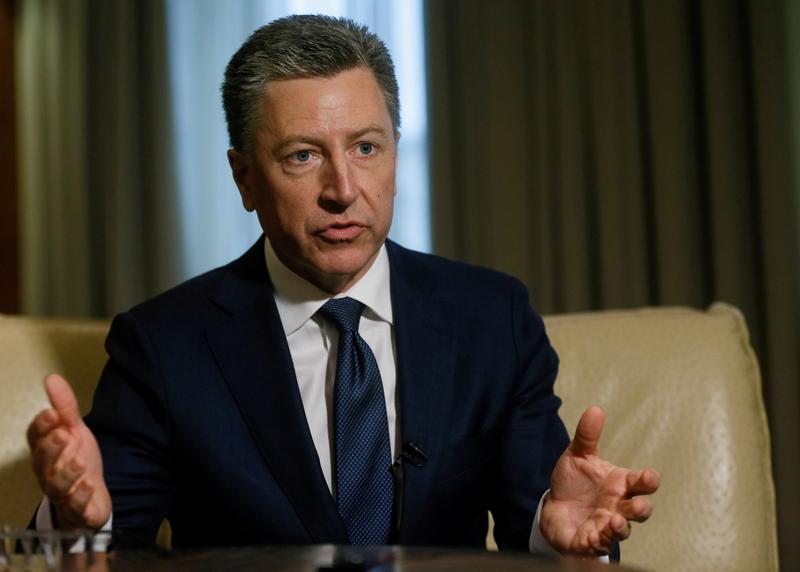 WASHINGTON (Reuters) – A longtime U.S. diplomat who served as President Donald Trump’s special envoy for Ukraine appeared before congressional committee staff on Thursday as part of a Democratic-led impeachment probe of the Republican president.

Kurt Volker resigned as special representative for Ukraine negotiations on Friday, a day after the public release of a whistleblower complaint that described him as trying to “contain the damage” from efforts by Trump’s lawyer Rudy Giuliani to press Ukraine to investigate Democrats.

As the diplomat arrived on Capitol Hill, Giuliani shared on Twitter a series of text messages he had received from Volker discussing contacts with Andrey Yermak, an adviser to Ukrainian President Volodymyr Zelenskiy.

Giuliani has said senior officials at the State Department were aware of and endorsed his actions in Ukraine on behalf of the president.

In one text, Volker discusses a meeting in early August.

“Please send dates when you will be in Madrid. I am seeing Yermak tomorrow morning. He will come to you in Madrid. Thanks for your help! Kurt.”

The Madrid meeting was cited in the whistleblower complaint as a follow-up to Trump’s July 25 call with Zelenskiy.

Volker’s meeting with the committee comes after a heated day in the impeachment inquiry on Wednesday, when Trump railed at journalists during a news conference, resorted to the use of an expletive on Twitter and called the probe “a hoax and a fraud” while pledging to cooperate.

Democratic lawmakers had said earlier on Wednesday they were prepared to subpoena White House records about Trump’s July 25 telephone call with the Ukrainian president.

The impeachment probe has angered Trump, whose volatile presidency survived a two-year federal probe that found Russia had intervened to help him win the White House in 2016.

Pelosi said Trump had endangered national security and jeopardized the integrity of U.S. elections by seeking a foreign leader’s help to damage a political rival.

“I think the president knows the argument that can be made against him. And he’s scared,” she said in an interview with ABC’s “Good Morning America.”

Trump froze $400 million in U.S. aid to Ukraine shortly before he asked its president for the favor, prompting accusations he had leveraged taxpayer funds for personal gain.

On Thursday, staff from the House Foreign Affairs, Intelligence and Oversight committees will conduct a transcribed interview with Volker. The 54-year-old, who is also a former U.S. ambassador to NATO, is appearing voluntarily.

The briefing will take place behind closed doors, the first of a series of events in the probe scheduled within the next 10 days, none of them public. More are expected.

On Friday, Intelligence Community Inspector General Michael Atkinson will testify at a closed Intelligence Committee hearing. Marie Yovanovitch, who was the U.S. ambassador in Kiev until Trump recalled her in May before her normal term was up, will meet with committee staff on Oct. 11.

The impeachment probe could lead to the approval of articles of impeachment – or formal charges – against Trump in the House. A trial on whether to remove Trump from office would then be held in the Republican-controlled Senate. Many Republicans, however, have shown little appetite for ousting him.

“Republicans in Congress must speak out against President Trump’s admitted abuse of power and stand up for Congress’s duty to conduct a full investigation,” the group, Republicans for the Rule of Law, said in a statement.

Trump has denied wrongdoing, repeatedly describing his call with Zelenskiy as “perfect.”

Pelosi dismissed that characterization at a news conference on Wednesday, saying: “It’s not perfect – it’s wrong.”