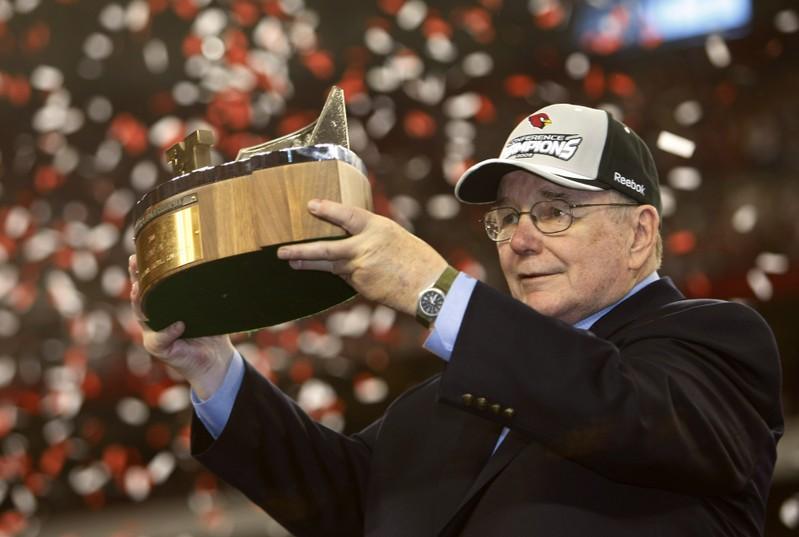 Bill Bidwill, the sole owner of the NFL’s Cardinals franchise since 1972, died Wednesday at 88.

Bill Bidwill’s father, Charles Bidwill, bought the Cardinals, then in Chicago, in 1932. Bill and his brother Charles Jr. inherited the team, then in St. Louis, in 1962 before Bill purchased his brother’s share in 1972. He moved the team to the Phoenix area in 1988.

“Bill Bidwill was part of the NFL family his entire life, starting from his days as a ball boy through his time as an owner,” NFL commissioner Roger Goodell said in a statement.

Still, he has yet to be cleared for full football activity. Backup Matt Barkley is preparing to play in case Allen can’t on Sunday at Tennessee.

—New York Jets quarterback Sam Darnold returned to practice but hasn’t been cleared for contact as he continues his recovery from mononucleosis.

Coach Adam Gase told reporters that Darnold would take part in drills with the first unit, but his status for the Sunday game at Philadelphia remains up in the air. Luke Falk will be ready to go if Darnold isn’t, Gase said.

—Washington Redskins coach Jay Gruden admitted that the team doesn’t have a plan at quarterback heading into its Sunday game against the New England Patriots.

—Chicago Bears linebacker Roquan Smith, who missed last week’s win against Minnesota for personal reasons, said he will play Sunday against the Oakland Raiders in London. The news wasn’t as good for quarterback Mitchell Trubisky, who dislocated his left shoulder last weekend.

Coach Matt Nagy said that Smith would practice but didn’t guarantee he would play against Oakland, and he added Trubisky wasn’t expected to play.

—The Patriots placed veteran kicker Stephen Gostkowski on injured reserve. ESPN’s Adam Schefter reported that Gostkowski will require season-ending surgery for a left hip injury and would be ready for the 2020 season.

Multiple outlets reported that the Patriots worked out free agent kickers Wednesday, and ESPN’s Mike Reiss reported that veteran Kai Forbath was among them.

—The Bengals placed wideout John Ross on injured reserve because of a right shoulder injury sustained during Cincinnati’s Monday night loss in Pittsburgh.

No surgery was scheduled, and Ross is expected back this season, according to NFL Network. In a corresponding move, the Bengals signed rookie receiver Stanley Morgan Jr. from their practice squad.

—The Kansas City Chiefs’ offense got two key players back at practice, as wide receiver Tyreek Hill and running back Damien Williams were both present.

—Giants running back Saquon Barkley, who has been recovering from a high ankle sprain, appears to be on the mend sooner than expected and was spotted on the practice field, according to multiple outlets.

—The Jacksonville Jaguars announced that disgruntled cornerback Jalen Ramsey was sitting out practice due to a lingering back injury. Ramsey has asked for a trade.

—The Green Bay Packers claimed outside linebacker Tim Williams off waivers from the Ravens. Earlier this week, Baltimore gave up on Williams, a 2017 third-round pick, after he managed only two sacks in 19 games (no starts) over three seasons.

—The Baltimore Ravens signed inside linebacker Josh Bynes, who was part of their 2013 Super Bowl-winning team. He will fill Tim Williams’ roster spot.

—Cleveland Browns linebacker Christian Kirksey, on injured reserve since Sept. 21, is expected to miss the rest of the season after surgery to repair a torn pectoral tendon.

—Denver Broncos offensive tackle Ja’Wuan James, who sustained a knee injury in the season opener and hasn’t played since, returned to practice on a limited basis.

—Former NFL wide receiver Percy Harvin admitted he dealt his anxiety by self-medicating with marijuana. “There’s not a game — there’s not a game I played that I wasn’t high,” Harvin told Bleacher Report.