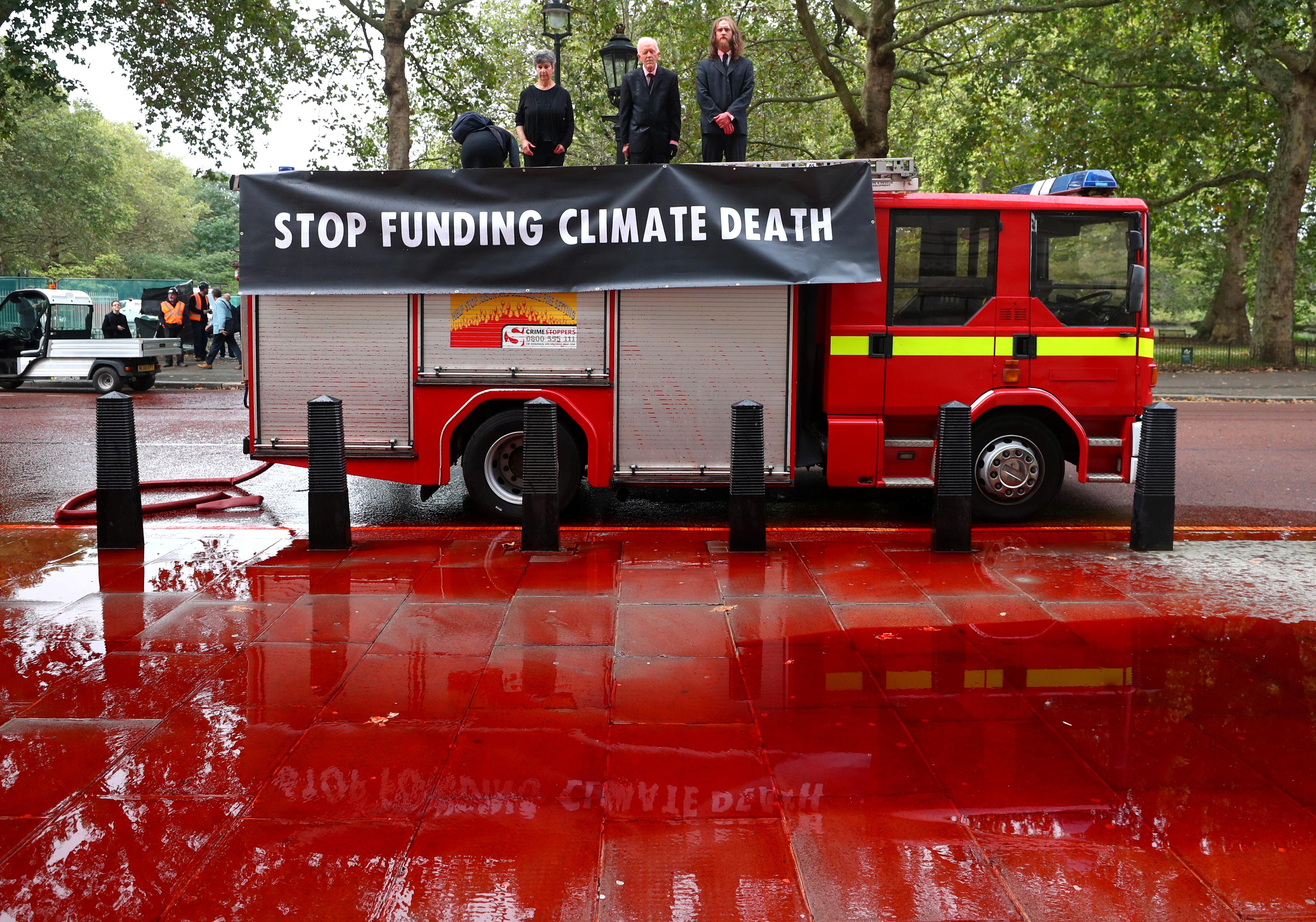 LONDON (Reuters) – Climate change activists used a fire engine to hose a red liquid at the facade of the British finance ministry on Thursday in an attempt to draw attention to what they said was the government’s failure to avert a looming climate cataclysm.

The activists from the group Extinction Rebellion drove up to the Treasury in a fire engine they had purchased on eBay, and sprayed what they described as fake blood high onto the building.

After the stunt, four activists including an 83-year-old man stood on the roof of the fire engine, from which they hung a banner saying “Stop funding climate death”, a slogan that was also daubed onto the wall of the imposing central London building.

Fellow protesters stood on the street displaying other banners with slogans such as “This is an emergency”. The steps of the Treasury and the street in front were soaked in the red liquid, which was water colored with food dye.

“The Treasury has been frustrating efforts by other government departments to take action against climate change because it cares only about economic growth,” one of the activists, named Ben, told Reuters at the scene.

“It doesn’t see that eternal economic growth leads to climate death,” he said. “The red symbolizes the people dying now in the global south and also the people who are going to start dying from climate change all around the world if we do nothing.”

The Treasury said in response that the United Kingdom was a world leader on climate change, having reduced its carbon emissions by 42 percent between 1990 and 2017, while growing the economy by more than two-thirds.

“In June, we became the first major economy to legislate to end our contribution to global warming by 2050. We will continue to build on this proud record,” a Treasury spokeswoman said.

Police cordoned off the area and arrested at least six people on suspicion of criminal damage, according to Reuters reporters at the scene. A police spokeswoman said final arrest figures were not yet available.

Extinction Rebellion is calling for the UK to reach net zero carbon emissions by 2025. It accuses the British government of investing vast sums in carbon-intensive projects that are inconsistent with its stated environmental aims.

The group says it wants non-violent civil disobedience to force governments to cut carbon emissions and avert a climate crisis it says will bring starvation and social collapse.

The group disrupted London with 11 days of protests in April that it cast as the biggest act of civil disobedience in recent British history.