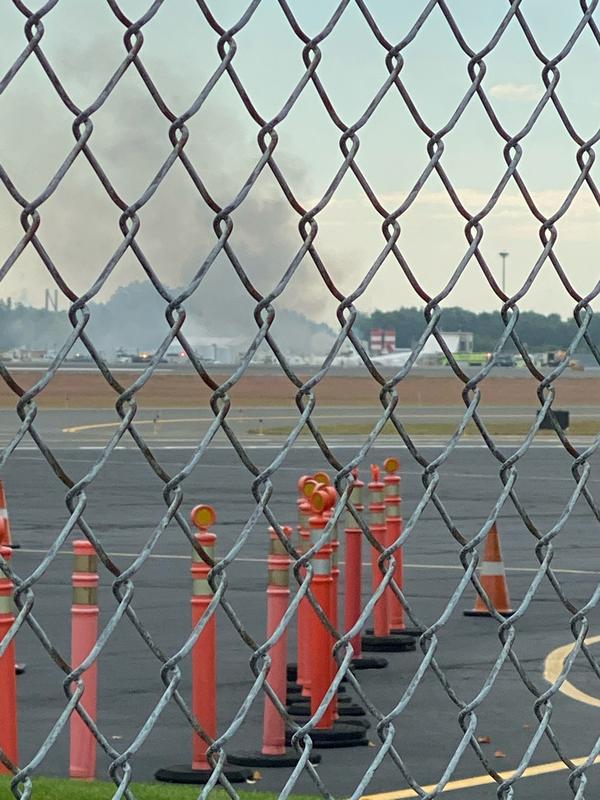 (Reuters) – A World War Two-era B-17 bomber trying to make an emergency landing at an airport near Hartford, Connecticut, crashed and burned, killing an undetermined number of people and closing the airport for several hours, authorities said.

Smoke is seen from Windsor Locks at the site of an airplane crash in Bradley International Airport, Connecticut, United States October 2, 2019, in this picture obtained from social media. Bryan St. Amand via REUTERS

The Boeing B-17 Flying Fortress returned to Bradley International Airport within 10 minutes of takeoff after reporting “some type of problem,” but lost control on the runway and struck a maintenance facility and tanks of de-icing fluid, Connecticut Airport Authority Executive Director Kevin Dillon told a news conference.

Rescue crews from numerous emergency response agencies raced to the fiery scene where a plume of thick, black smoke billowed skyward after the crash at the end of the runway shortly before 10 a.m. EDT (1400 GMT).

Officials said the crash of the civilian-registered four-engine plane killed some of the 10 passengers and three crew members aboard, but they declined to say how many, pending identification of the bodies pulled from the smoldering wreckage.

“The victims are very difficult to identify,” said Commissioner James Rovella of the state Department of Emergency Service and Public Protection. “We don’t want to make a mistake.”

A maintenance worker on the ground was also involved in the crash, officials said.

The Hartford Courant newspaper, citing unidentified sources, reported that at least five people were killed and nine were injured.

The airport, located in the town of Windsor Locks, was closed for about 3-1/2 hours after the crash.

The National Transportation Safety Board said it was sending a team to investigate.

U.S. Senator Richard Blumenthal said investigators will very carefully examine the potential causes of the crash of the vintage plane, one of only 18 B-17 aircraft in the country.

“There’s a real need for scrutiny and oversight if these planes are going to continue flying,” the Connecticut Democrat told the news conference.

Bradley Airport said the plane was operated by the Massachusetts-based Collings Foundation, which is dedicated to the preservation and public display of automotive and aviation-related history, according to its website.

The foundation issued a statement immediately after the crash thanking the airport’s first responders for their efforts.

“The Collings Foundation flight team is fully cooperating with officials to determine the cause of the crash of the B-17 Flying Fortress and will comment further when details become known,” it said.

Reporting by Peter Szekely and Maria Caspani in New York and David Shepardson in Washington; Editing by Bernadette Baum and Jonathan Oatis