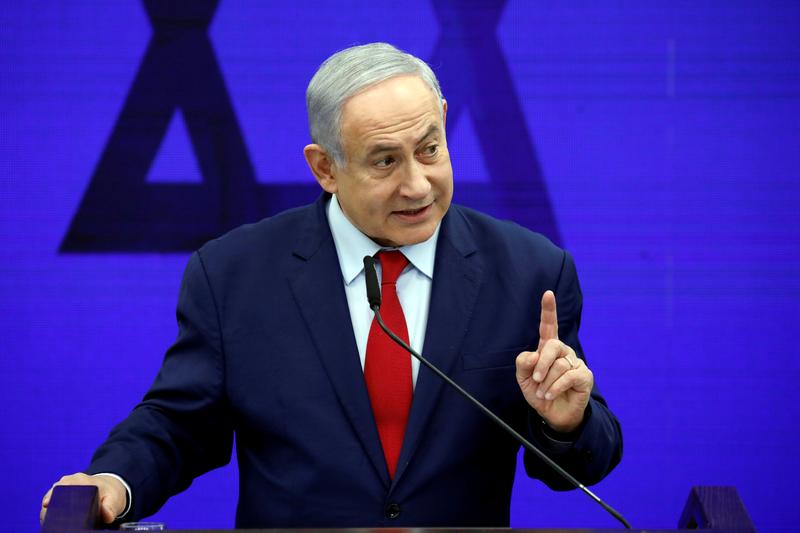 JERUSALEM (Reuters) – Israeli Prime Minister Benjamin Netanyahu began his final attempt to fend off a corruption indictment on Wednesday when his lawyers argued against looming charges that have combined with election stalemate to threaten his long hold on power.

The pre-trial hearings, scheduled to be held over four days, will allow him to make his case against indictment to Attorney-General Avichai Mandelblit in three graft investigations.

A final decision by the attorney-general on whether to file charges is expected by the end of 2019.

Netanyahu, who denies any wrongdoing, faces no legal requirement to leave government if indicted, as long as he remains prime minister.

But his aura of political invincibility has been clouded by his failure to win a clear victory in parliamentary elections in April and last month, after a decade in office as head of the right-wing Likud party.

“Today, we will present all the evidence that everyone knows and some new evidence,” Amit Hadad, one of Netanyahu’s attorneys, told reporters outside Mandelblit’s office. “We believe that all three cases will be dropped after the hearings.”

Mandelblit announced in February that he intends to charge Netanyahu with bribery, fraud and breach and trust. Netanyahu has said he is the victim of a political witch-hunt spearheaded by left-wing opponents and journalists.

The investigations, dubbed Cases 1000, 2000 and 4000, have revolved around gifts of champagne and cigars that Netanyahu has acknowledged receiving from millionaire friends, purported attempts to influence media coverage and the alleged dispensing of regulatory favors.

Netanyahu has said he is the victim of a political witch-hunt spearheaded by left-wing opponents and journalists.

He is the first sitting Israeli prime minister to go through a pre-indictment hearing process.

Ehud Olmert, facing corruption allegations, quit as Israel’s leader in 2008 before such sessions could be held or any indictment filed. He was eventually charged and convicted of accepting bribes, and served 16 months in jail before his release in 2017.

On Tuesday, talks to form a national unity government hit a further snag after Netanyahu’s centrist election rival, Benny Gantz of the Blue and White party, called off a meeting with him scheduled for Wednesday.

With neither leader appearing able to put together a coalition with a ruling majority on his own, Israel’s president last week gave Netanyahu 28 days to try to form the next government in the hope of securing a power-sharing deal.

Gantz, however, has pledged not to serve in a government under a premier facing criminal charges.