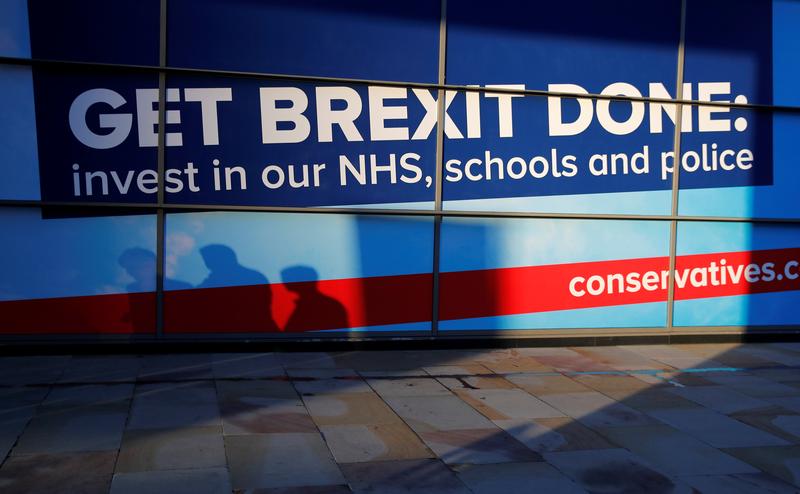 A Brexit slogan is displayed at the venue of the Conservative Party annual conference in Manchester, Britain, October 2, 2019. REUTERS/Phil Noble

BRUSSELS (Reuters) – The latest British proposal on Brexit, as reported by media, is “fundamentally flawed” and “won’t fly”, EU diplomats and officials said on Wednesday, adding that another delay to Britain’s departure is likely if this is London’s final offer.

“The proposal is fundamentally flawed,” a senior European Union official said, referring to detail reported by media on what British Prime Minister Boris Johnson said would be his final bid to get a deal done before Britain is due to leave on Oct. 31.

“If it’s take it or leave it, we better close the book and start talking about the modalities of an extension,” the official said.

He said EU heavyweights France and Germany would not press Ireland to accept the proposal being offered by Britain that would affect its currently open border with Northern Ireland.

The other 27 EU member states would not reject a request from Britain to extend its deadline beyond Oct. 31 because it would not want to be held responsible for failure.

“If they want to commit a stupidity it should be fully their responsibility,” the official said. “The EU will never push the UK out, the Union will never close the door.”

The EU has repeatedly asked Britain to come up with “legal and operational” proposals for changes Johnson wants to a Withdrawal Agreement that his predecessor Theresa May negotiated with the bloc last year.