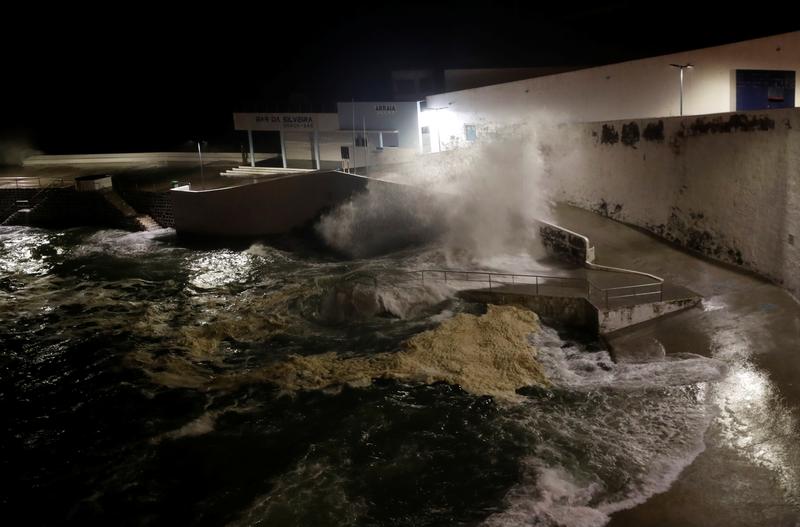 Waves crash on a wall along the coast near Angra do Heroismo, before the arrival of Hurricane Lorenzo in Azores, Portugal October 2, 2019. REUTERS/Rafael Marchante

“Right now the hurricane has already arrived in the Azores because we are being affected by it,” said Carlos Neves, the president of the Azores’ civil protection authority.

Lorenzo was southwest of the island of Flores and would affect the remaining western islands at around 6 a.m. (0600 GMT) on Wednesday, Neves told reporters.

The hurricane, packing 100 mile per hour (155 kph) winds, was likely to cause life-threatening surf and rip current conditions, with only a slow weakening forecast over the next 48 hours, U.S. forecaster the National Hurricane Center said.

Neves said five minor incidents, including fallen trees, had been reported, while more than 300 firefighters had been put on alert.

Despite weakening from a Saturday peak, Lorenzo is still a strong Category 2 hurricane but will downgrade to a Category 1 as it continues its path, Portugal’s meteorological agency IPMA has said.

“The situation will worsen in the next few hours,” Vasco Cordeiro, the president of the regional government, told Portuguese TV channel SIC, as winds strengthened in Flores, which IPMA expects will be the worst hit. The island has about 4,000 inhabitants.

Schools and non-emergency public services will be closed across the Azores on Wednesday, the regional government has said, with ports on some islands also shut.

Authorities closed numerous streets and roads as a precautionary measure.

The Miami-based NHC said it expected the eye of Lorenzo to pass near the western Azores, with a hurricane warning in effect for the islands of Flores, Corvo, Faial, Pico, Sao Jorge, Graciosa and Terceira.

Lorenzo briefly became a Category 5 hurricane at the weekend, the strongest on record this far north and east in the Atlantic.