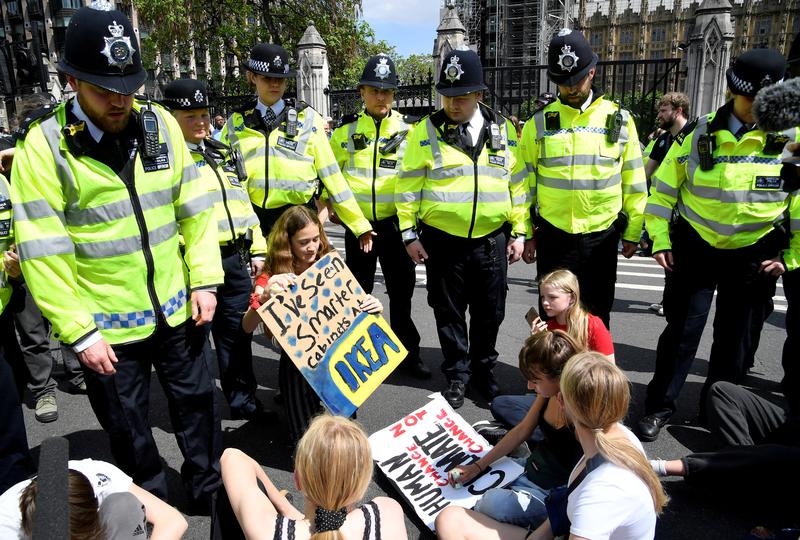 LONDON (Reuters) – London police said on Wednesday they would mobilize thousands of officers to deal with two weeks of planned chaos by climate activists and potential protests over Brexit.

From Monday, environmental campaign group Extinction Rebellion is planning to occupy and blockade 12 sites around Westminster in central London, home to parliament and government buildings, as part of a fortnight of international action to demand action on climate change.

The protest coincides with the run-up to Britain’s exit from the European Union, scheduled to take place on Oct. 31, with feelings running high between pro and anti-Brexit supporters and concern the tensions could spill over into violence.

“Our intention is London stays open for business throughout this period,” Assistant Commissioner Nick Ephgrave told reporters. Asked how many officers would be deployed, Ephgrave said: “It’s a significant resource.”

In April, Extinction Rebellion caused 11 days of major disruption in central London in one of the largest civil disobedience campaigns seen in Britain, which helped push the climate change issue up the political agenda.

About 1,100 people were arrested, with some 850 prosecuted and more than 250 so far convicted of offences during the action which brought major routes to a standstill and saw a pink sailboat used to block Oxford Circus in the capital’s major shopping district.

The activists have promised that this month’s action will be on an even larger scale.

“Part of the intention is to overwhelm our ability in the police service to respond to their protest activity,” Ephgrave said. He warned all those who broke the law, even as part of non-violent civil disobedience, would face action.

The force was criticized for a slow response to April’s disruption, which cost about 16 million pounds ($20 million) to police, and Ephgrave said they had learned lessons.

“We need to be agile, we need to be slightly more proactive,” he said. “We want to not be caught out. We want to try and be ahead of what’s happening rather than responding to it.”