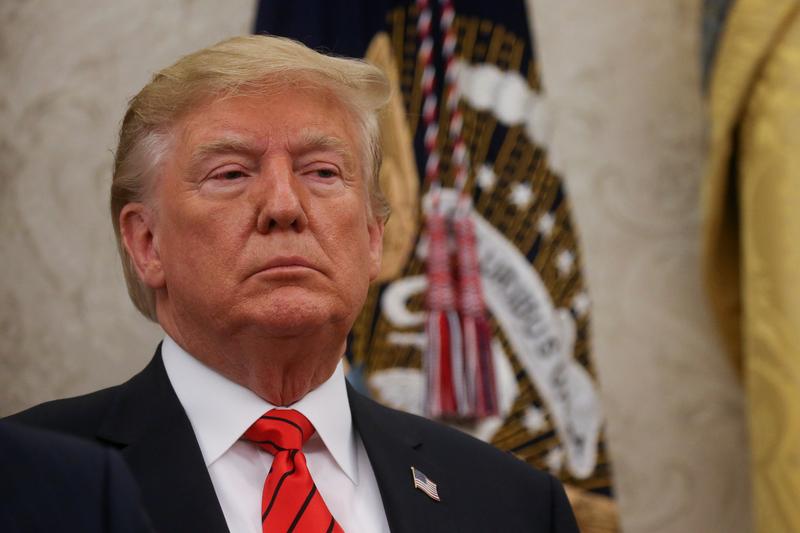 WASHINGTON (Reuters) – The U.S. House of Representatives’ impeachment probe into President Donald Trump intensified on Monday, as Trump raged about the inquiry and news reports suggested he had used additional diplomatic channels to go after his adversaries.

Three House committees said a subpoena for documents had been sent to Trump’s lawyer Rudy Giuliani. The former New York mayor had said on television he asked the government of Ukraine to “target” former Vice President Joe Biden, who is seeking the Democratic nomination to run against Trump in the 2020 election.

Giuliani said in a tweet the subpoena raised legal issues including attorney-client privilege. “It will be given appropriate consideration,” he added.

The Democratic-led House initiated an impeachment inquiry against Trump last week after a whistleblower report raised concerns that Trump tried to leverage nearly $400 million in U.S. aid in exchange for investigating Biden from Ukraine’s leader in July.

U.S. Secretary of State Mike Pompeo took part in the July 25 phone call between Trump and Ukrainian President Volodymyr Zelenskiy in which the matter was discussed, the Wall Street Journal reported, something likely to draw the attention of House investigators.

The New York Times reported that Trump had sought the help of another world leader, Prime Minister Scott Morrison of Australia, with a U.S. Justice Department probe into the origins of what became Special Counsel Robert Mueller’s investigation into Russian interference in the 2016 election.

“The Democrats clearly don’t want the truth to come out anymore as it might hurt them politically, but this call relates to a DOJ inquiry publicly announced months ago to uncover exactly what happened,” White House spokesman Hogan Gidley said in response to the Times story.

An Australian government spokesperson said in an email:

“The Australian Government has always been ready to assist and cooperate with efforts that help shed further light on the matters under investigation. The PM confirmed this readiness once again in conversation with the President.”

Barr has held private meetings overseas with foreign intelligence officials in Britain and Italy to seek their assistance as well with that investigation, the Washington Post reported.

In the Giuliani document request, the chairmen of three House committees said he had “stated more recently that you are in possession of evidence – in the form of text messages, phone records, and other communications – indicating that you were not acting alone and that other Trump Administration officials may have been involved in this scheme.”

He was given until Oct. 15 to respond.

A Sept. 26-30 Reuters/Ipsos opinion poll found that 45% of American adults believed Trump “should be impeached,” compared with 37% in a similar poll that ran last week. Forty-one percent said Trump should not be impeached and 15% said they “don’t know.”

Republican Senate Majority Leader Mitch McConnell appeared on Monday to put to rest speculation he would use his position to derail any impeachment effort by the Democratic-led House by avoiding a trial at all. The Republicans control the Senate and have been largely muted about the allegations and inquiries into fellow-Republican Trump.

If the House approves bringing charges, known as “articles of impeachment,” against a president, the process moves to the Senate, where there would be a trial.

“I would have no choice but to take it up,” McConnell told CNBC. “Under the Senate rules, we are required to take it up if the House does go down that path. “The Senate impeachment rules are very clear.”

Trump spent much of the day directing his ire at the Democrat leading the House inquiry, suggesting on Twitter that U.S. Representative Adam Schiff, chairman of the House Intelligence Committee, should be arrested for “treason.”

Later, speaking to reporters at the White House, Trump accused Schiff of distorting his conversation with Zelenskiy at a House hearing last week.

In those comments, Schiff said the call to Zelenskiy “reads like a classic organized crime shakedown” and parodied the president’s remarks.

A spokesman for Schiff did not respond to a request for comment on Trump’s remarks.

A U.S. intelligence official filed a whistleblower complaint citing the July 25 telephone call in which Trump asked Zelenskiy to investigate Biden and his son Hunter, who sat on the board of a Ukrainian gas company.

“The Intel Community Whistleblower is entitled to anonymity,” Andrew Bakaj, an attorney for the whistleblower, said on Twitter shortly after the president’s remarks. “Law and policy support this and the individual is not to be retaliated against. Doing so is a violation of federal law.”

Democrats on the Senate Judiciary Committee on Monday called on the committee’s Republican chairman, Lindsey Graham, a close ally of Trump, to convene hearings to investigate the administration’s handling of the whistleblower’s complaint, and said the panel should act to “protect witnesses from intimidation.”

“This Committee should not sit idly by as the President threatens potential witnesses, whose testimony may be crucial to congressional investigations into credible allegations against him,” the Democrats wrote in a letter to Graham.

House Speaker Nancy Pelosi has said she wants to move “expeditiously” on the impeachment inquiry, perhaps paving the way for an impeachment vote on the House floor early next year.

While McConnell said on Monday that he would be forced to hold a trial, he did not commit to letting it run its full course.

“How long you’re on it is a whole different matter,” McConnell told CNBC.

According to a Senate Republican leadership aide, any senator could attempt to have the articles dismissed in the early stages of the trial, which would trigger a vote with a majority of the Senate needing to be in favor for it to succeed.

Democrats accuse Trump of pressuring a vulnerable U.S. ally to get dirt on a rival for personal political gain. The phone call with Zelenskiy came after Trump froze nearly $400 million in aid intended to help Ukraine deal with an insurgency by Russian-backed separatists in the eastern part of the country. The aid was later provided.

Schiff said on Sunday he expected the whistleblower to appear before the panel very soon.

The U.S. Congress is on a two-week recess but members of the Intelligence Committee will return to Washington this week to carry out an investigation likely to produce new subpoenas for documents and other material.

The committee is scheduled to hold a closed-door hearing on Friday with the intelligence community’s inspector general, Michael Atkinson, who has concluded that the whistleblower complaint was of urgent concern and appeared credible.

House investigators are set to take the first witness testimony from two people mentioned in the whistleblower’s complaint.

On Wednesday, three House committees – Intelligence, Foreign Affairs and Oversight – are due to get a deposition from former U.S. Ambassador to Ukraine Marie Yovanovitch, whom Trump labeled “bad news” during his call with Zelenskiy.

On Thursday, the committees are set to get a deposition from Kurt Volker, who resigned last week as Trump’s special representative for Ukraine after the whistleblower complaint named him as one of two U.S. diplomats who followed up with Ukrainian officials a day after Trump’s call to Zelenskiy.