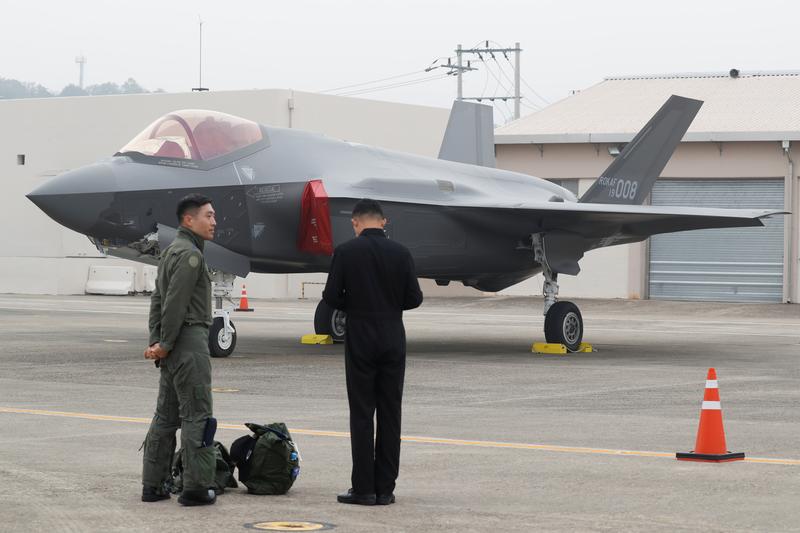 SEOUL (Reuters) – South Korean fighter jets flew a patrol on Tuesday over islands at the center of a bitter dispute with Japan, South Korean President Moon Jae-in said at an event marking the founding of his nation’s military, prompting a protest from Tokyo.

A South Korean fighter pilot (L) stands next to his F-35 stealth fighter during a ceremony to mark the 71st Armed Forces Day at the Air Force Base in Daegu, South Korea, October 1, 2019. Jeon Heon-kyun/Pool via REUTERS

He said the F-15K jets patrolled the disputed islets called Dokdo in Korea and Takeshima in Japan, which are controlled by Seoul and claimed by both countries, a move that could inflame already strained ties between the two.

“Just a moment ago, the F-15K, the most powerful fighter-bomber in Northeast Asia, has returned from completing a patrol mission over our land Dokdo… without any problems,” Moon told the military in a speech.

South Korea’s defense ministry clarified that two of the four jets participating in the patrol flew over the islands.

Japan strongly protested the flight, one of its foreign ministry officials told Reuters on condition of anonymity.

The islands belong to Japan historically and under international law and the patrol was unacceptable and deplorable, the official added, saying Japan had previously asked Seoul not to conduct the flights.

On Friday, South Korean officials had protested over Tokyo’s annual defense review that referred to Japan owning the islands. The foreign ministry summoned a military official at the Japanese embassy in Seoul to demand an immediate retraction.

The neighbors have been locked in a worsening diplomatic and trade row rooted in wartime history and disagreements over compensation for forced laborers during Japan’s 1910-1945 occupation of Korea.

After Japan tightened curbs on exports of high-tech materials vital to South Korea’s chip and display industries in July, each has stripped the other of fast-track trade status.

In addition, South Korea decided in August to terminate an intelligence-sharing pact with its neighbor.

In July, a Russian military aircraft twice violated airspace over the disputed islands and drew hundreds of warning shots from South Korean jets, South Korean officials said, during what Russia said was a long-range joint air patrol with China.

Japan, which said it also scrambled fighter aircraft at the time, lodged a complaint with both South Korea and Russia over the incident.

Moon marked Armed Forces Day at a ceremony at an airbase in the city of Daegu where four of the eight Lockheed Martin (LMT.N) F-35A jets delivered this year were displayed. Forty of the aircraft are to be delivered by 2021.

He made no direction mention of Japan, or North Korea, in his address, but said today’s security climate was highly unpredictable, requiring strength as well as innovation.

“As the recent drone attack in the Middle East demonstrated to the world, the challenges we will face will be entirely different from those of the past,” he said.

North Korea has criticized the South’s weapons procurements and its joint military drills with the U.S. military as undisguised preparations for war that are forcing it to develop new short-range missiles.

Moon has thrown his support behind talks to end the North’s nuclear and ballistic missile programs, urging that working-level negotiations between the North and the United States be held soon. No new dates or locations have been set.

Reporting by Joyce Lee; Additional reporting by Sangmi Cha in Seoul and Linda Sieg in Tokyo; Editing by Raju Gopalakrishnan and Clarence Fernandez