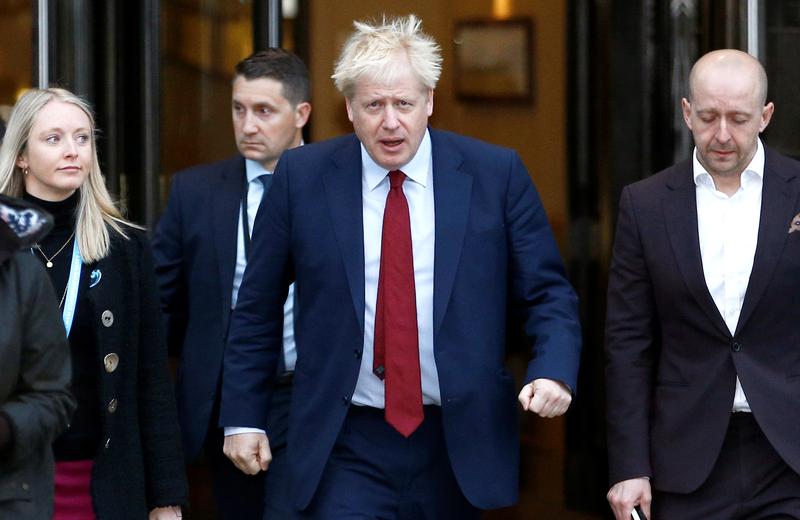 MANCHESTER, England (Reuters) – British Prime Minister Boris Johnson pitched new proposals on Tuesday for an amended Brexit agreement that would remove the contested insurance policy for the Irish border, but EU officials sounded sceptical about the chances of a breakthrough.

More than three years after the 2016 referendum, the United Kingdom is heading towards an Oct. 31 Brexit date without a clear understanding of whether it will leave with a deal, without a deal or even leave at all.

The tortuous Brexit negotiations have meanwhile led to fatigue in EU capitals, even among Britain’s traditional allies.

One EU diplomat cast Johnson’s approach as a “kamikaze” Brexit strategy. Another bluntly said that a new deal would be difficult to do swiftly if London demanded substantive changes.

“I would like to veil our proposals in decent obscurity until we have been able to share them properly with our friends,” he said, dismissing a report that London would propose customs posts either side of the Irish border.

Johnson says he wants to secure an amended agreement at an EU summit on Oct. 17-18, and that both sides are keen on a deal to allow an orderly Brexit. Many EU diplomats doubt a breakthrough is possible by the summit.

“We are sitting here every day ready to negotiate, the kamikaze way in which it is being treated by the UK government is not something we have chosen,” one EU diplomat said.

Another said a move “half an inch” from the current proposal to keep open the sensitive border between Ireland and British-ruled Northern Ireland would make a deal difficult.

In a moment of truth that will define the future of Brexit, the EU and his premiership, Johnson is betting he can get enough concessions from Brussels to persuade Brexit supporters in the British parliament to ratify any deal.

If he succeeds, Johnson will go down in history as the British leader who delivered Brexit. If he fails, a law has been passed by parliament forcing him to delay departure — a step that could destroy his popularity among “Leave” voters.

Johnson said on Tuesday “we are working flat out to get a deal” and denied speculation that he did not really want one, saying: “This is completely untrue – I really must stress it is the absolute inverse of reality.”

Johnson’s gamble hinges on the removal of the backstop, an insurance policy which aims to avoid the reimposition of checks along the United Kingdom’s only land border with the EU.

The EU does not want Northern Ireland to become a “back door” to the EU single market but having an open border is important to safeguarding the 1998 Good Friday Agreement (GFA) that ended decades of sectarian violence in Northern Ireland.

“What we want to do is to get rid of the backstop, that is the most important thing,” Johnson said, adding there was no point in leaving the EU only to stay locked in a customs union but that he wanted to protect the peace deal.

The Withdrawal Agreement that former Prime Minister Theresa May struck in November with the EU says the United Kingdom will remain in a customs union “unless and until” alternative arrangements are found to avoid a hard border.

But many British lawmakers oppose the prospect of being bound to EU rules and customs duties that would prevent Britain doing its own trade deals and leave it overseen by EU judges.

“We would like to be able to vote for a deal and actually I’m highly confident if Boris brings back a deal it will be a deal which he expects we’ll want to support,” said Steve Baker, chairman of a group of pro-Brexit Conservative lawmakers.

“If it’s Brexit in name only, I will vote against it.”

Under questioning, Johnson said there would have to be some checks on the island of Ireland — a step too far for Irish nationalists. Dublin has also consistently said that the border must remain seamless.

“That’s just the reality,” Johnson said. “Because in the end, a sovereign, united country must have a single customs territory. When the UK withdraws from the EU that must be the state of affairs that we have.”

Johnson denied a report by Irish broadcaster RTE that there would have to be border posts 5-10 miles (8-16 km) back from the border. Irish Foreign Minister Simon Coveney quipped such proposals would be a “Non-Starter”.

Mary Lou McDonald, president of Irish nationalist party Sinn Fein, said the reported proposal from Britain to set up “customs clearance centres” near the Irish border was absolutely not acceptable as it represented a hardening of the frontier.

“What we’re coming up to now is, as it were, the critical moment of choice for us as friends and partners about how we proceed,” Johnson said.