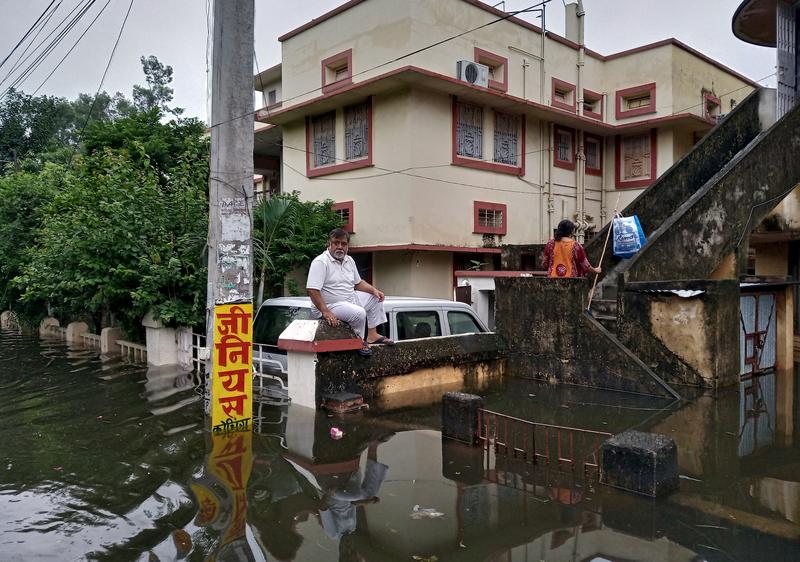 NEW DELHI/LUCKNOW (Reuters) – The heaviest monsoon rains to lash India in 25 years have killed more than 1,600 people since June, government data showed on Tuesday, as authorities battled floods in two northern states and muddy waters swirled inside a major city.

A man sits on a boundary wall of a house as he waits to be evacuated from a flood-affected neighbourhood in Patna, in the eastern state of Bihar, India, October 1, 2019. REUTERS/Stringer

The monsoon, which typically lasts between June and September, has already delivered 10% more rain than a 50-year average, and is expected to withdraw only after early October, more than a month later than usual.

In Patna, Bihar’s riverside capital city that is home to around two million people, residents said they were wading through waist-deep water to buy essential items like food and milk.

Ranjeev Kumar, 65, a resident of Patna’s Ashiyana neighbourhood, told Reuters by telephone that the entire area was stranded by the water.

“The government is not doing any rescue and the situation is very serious here,” he said.

On Monday, relief workers rescued Bihar’s Deputy Chief Minister Sushil Modi from his home in Patna. Video footage showed him dressed in shorts and a t-shirt as he was brought out on a raft along with his family members.

Saket Kumar Singh, who lives in the city’s Boring Road area, said he was stranded for four days, with about two feet of water inside his house.

“There was no electricity, and despite having money I was helpless,” Singh, 45, said.

In neighboring Uttar Pradesh, India’s most populous state, heavy rains have brought down more than 800 homes and swathes of farmland are submerged.

Data released by the federal home ministry shows that 1,673 people have died because of floods and heavy rains this year, as of Sept. 29.

Officials said that many of these fatalities were caused due to wall and building collapses, including in Uttar Pradesh and Maharashtra, the western state that has seen 371 flood-related deaths in 2019, the highest in the country.

“The danger of old or weak structures collapsing increases during the heavy rainfall, like what happened this time,” Chandrakant Sharma, a flood expert with Uttar Pradesh’s disaster relief department, told Reuters.

India’s flood prevention and forecasting systems are lacking, other experts say, even as the total flood prone area in the country has increased in recent decades because of deforestation, degradation of water bodies, and climate change.

Reporting by Devjyot Ghoshal in NEW DELHI and Saurabh Sharma in LUCKNOW, Additional reporting by Rajendra Jadhav in MUMBAI; Editing by Peter Graff