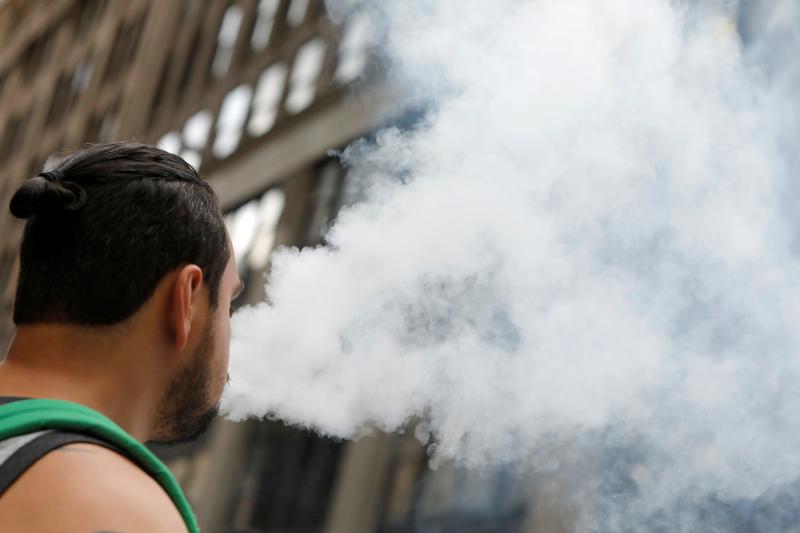 (Reuters) – Nebraska reported one death from a mysterious lung disease associated with the use of e-cigarettes, the state’s public health officials said, joining 10 other U.S. states to report fatalities. (bit.ly/2oSM9l7)

A man uses a vape as he walks on Broadway in New York City, U.S., September 9, 2019. REUTERS/Andrew Kelly

There have been 12 deaths and 805 confirmed and probable cases so far, according to the Centers for Disease Control and Prevention’s (CDC) latest data as of Thursday.

The agency last week urged people to not use e-cigarettes with marijuana ingredient tetrahydrocannabinol (THC) as data suggests that the high-inducing component may play a role in causing the illness.

The CDC updates the number of cases every Thursday as the investigation deepens. (bit.ly/2n4TPAm)

Here’s what we know about the vaping-related deaths so far:

** As of Sept. 24, 805 probable and confirmed cases of the illness have been reported from 46 states and 1 U.S. territory

** Massachusetts has imposed a four-month ban on sales of all vaping products, including those used for tobacco and marijuana, which is legal in the state

** New York state, Michigan and Rhode Island have all banned the sale of flavored vaping products