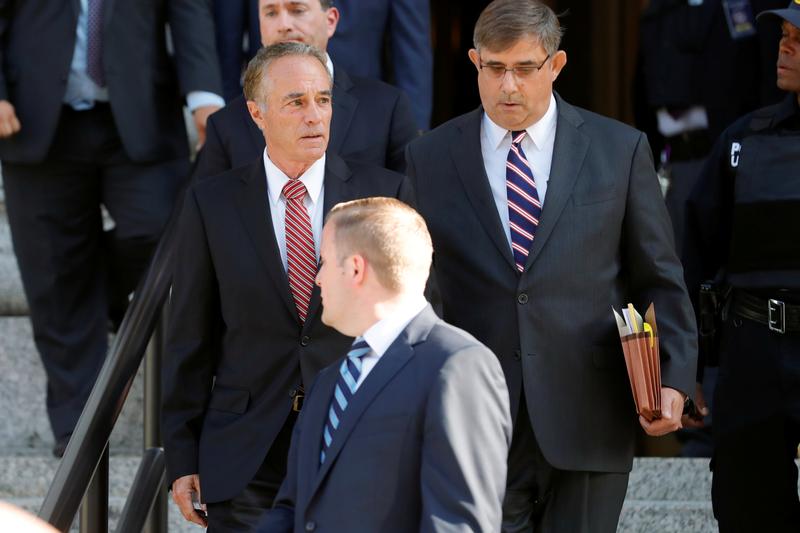 NEW YORK (Reuters) – Chris Collins, a former U.S. Congressman from New York state who was known as an early backer of President Donald Trump, pleaded guilty on Tuesday to taking part in an insider trading scheme.

Collins, 69, entered his plea to charges of conspiracy and making false statements to investigators before U.S. District Judge Vernon Broderick in Manhattan the day after he resigned his seat in the U.S. House of Representatives.

He faces a maximum of five years in prison for each of the two charges when he is sentenced on Jan. 17, though prosecutors have agreed as part of a plea deal that a reasonable sentence would be a total of less than five years.

The criminal case arises from Collins’ role as a board member and 16.8% stakeholder of Australian biotechnology company Innate Immunotherapeutics Ltd.

Collins said in court Tuesday that in June 2017, during a congressional picnic on the White House lawn, he learned in an email from Innate’s chief executive that the company’s experimental multiple sclerosis drug, MIS416, had failed in a clinical trial.

Collins admitted that he immediately called his son, Cameron Collins, to tell him the news, allowing him to sell his Innate shares and avoid losses when it became public. Chris Collins said he was in “a very emotional state” when he made the call because he was upset the drug had failed.

“When I did these things, I knew they were illegal and improper,” he said. “The actions I took are anything but those a model citizen would take.”

The congressman did not trade his own Innate stock, which lost millions of dollars in value. Prosecutors have said he was “virtually precluded” from trading in part because he already faced a congressional ethics probe over Innate.

In all, prosecutors said, the people who received the tips were able to avoid a total of more than $768,000 in losses when Innate’s share price plunged 92% after news of the drug’s failure became public.

Cameron Collins, 26, and Stephen Zarsky, 67, have been charged in the case and are scheduled to plead guilty on Thursday, court records show.

Lauren and Dorothy Zarsky were not criminally charged, but agreed to surrender the money they made selling Innate stock to the Securities and Exchange Commission under a civil settlement without admitting wrongdoing.