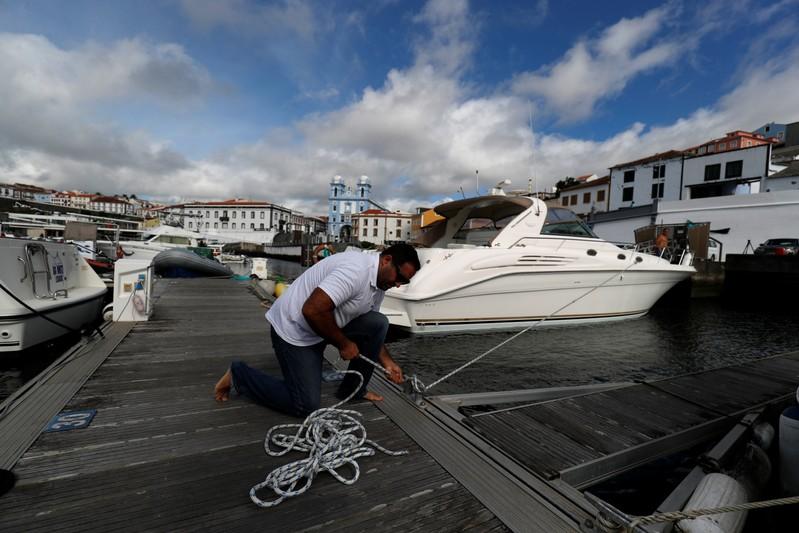 A man reinforces with ropes the mooring of his boat at a port before the arrival of Hurricane Lorenzo in Angra do Heroismo in the Azores islands, Portugal October 1, 2019. REUTERS/Rafael Marchante

Having weakened since a Saturday peak, Lorenzo is still set to reach the mid-Atlantic group of islands as a Category 1 hurricane in the early hours on Wednesday, according to Portugal’s meteorological agency IMPA.

“We are already used to events like this happening every now and then – this one is a bit stronger,” 58-year-old Daniel Matos told Reuters as he secured his boat in the town of Angra do Heroismo in the Terceira island.

The weather was calm over the islands on Tuesday, but clouds covered the sky in the afternoon as the hurricane, packing strong gales of 100mph (155kph), approached.

Miami-based weather forecaster the National Hurricane Center (NHC) said it expected the eye of Lorenzo to pass near the western Azores with a hurricane warning in effect for the islands of Flores, Corvo, Faial, Pico, Sao Jorge, Graciosa and Terceira.

“I’m not a meteorologist but people say it will be very strong,” said boat owner Francisco Reis. “We’ll see if we don’t suffer too much with it.”

The NHC said the hurricane is likely to cause life-threatening surf and rip current conditions, with only a slow weakening forecast over the next 48 hours.

“As many floods have already happened on this street and water has entered shops, we have to prevent before it comes,” said shopkeeper Milton Enes as workers installed a bolt-on metal board at the doors.

The regional government has said schools and non-emergency public services will be closed on Wednesday.

“The resources exist and people are prepared,” Alamo Meneses, mayor of Angra do Heroismo, told Reuters when asked if his city’s infrastructure is strong enough to cope with the expected strong winds and heavy rain.

Azorean airline SATA which operates daily flights between Portugal’s capital Lisbon and the main islands, has warned that nearly 1,000 passengers could be affected by cancellations on Wednesday.

Lorenzo briefly became a Category 5 at the weekend, the strongest hurricane on record this far north and east in the Atlantic, but has since been downgraded to a Category 2.