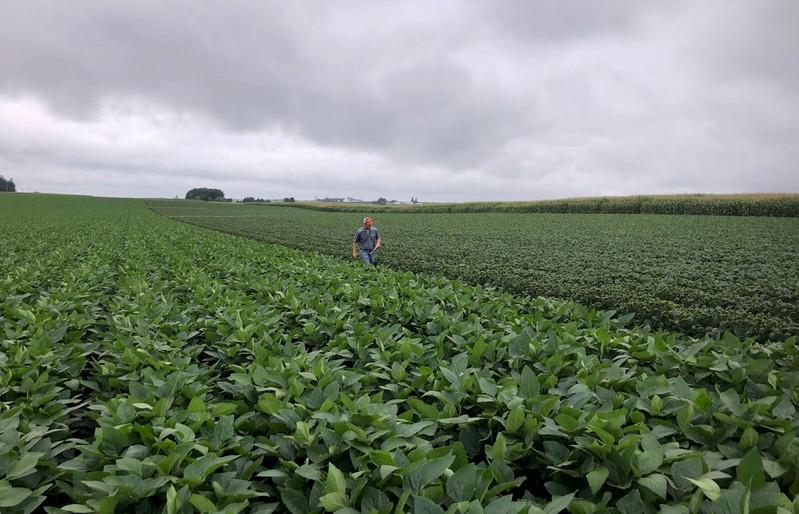 SAO PAULO (Reuters) – A genetically modified soy seed technology from Germany’s Bayer set to launch soon in Brazil has sparked concern from some farmers who worry that other crops could be impacted by dicamba, a herbicide the biotech product is designed to tolerate.

FILE PHOTO: Soybean fields are inspected as part of University of Wisconsin research trial into whether the weed killer dicamba drifted away from where it was sprayed in Arlington, Wisconsin, U.S., August 2, 2018. REUTERS/Tom Polansek

Widely used in the United States, dicamba has been described by farmers who have applied it as a volatile product that drifts off easily. As such, it may compromise non-tolerant soybeans, growers told Reuters.

“When dicamba lands on plants that haven’t been designed to resist it, those plants struggle,” said Cayron Giacomelli, a farmer and agronomist. “Dicamba is highly harmful to materials other than Xtend,” Giacomelli said.

Bayer makes the “INTACTA 2 XTEND” seed technology, which allows the genetically modified soybeans to be treated with dicamba without being harmed. Dicamba is used to control broadleaf weeds in grain crops, according to Cornell University.

Bayer is planning to launch Xtend in Brazil in the 2021/2022 crop cycle. It said on Monday that Xtend combines biotechnology with new crop protection tools to boost farmer yields “to a new level.”

Bayer did not immediately comment on the claims that the use of dicamba could affect other crops, but said it remained open to assist farmers in any query they may have.

National grain growers association Aprosoja said on Friday that Bayer had invited local farmers to participate in trials this season.

Aprosoja urged them to seek information from Bayer regarding the impact on crops of the use of dicamba, adding there are alternative weed killers in Brazil.

“In the United States, where the technology has already been launched, weeds are different from those in Brazil. There, dicamba is an essential tool,” Aprosoja said.

Farmer José Soares told Reuters he would not participate in the Bayer trials. “They are selling us a problem we don’t have to be able to sell us the solution,” he said.

Brazilian grain growers said they wanted Bayer to be accountable for any issues.

“If this product comes to market the company should be fully responsible for any problems that may occur,” said Antonio Galvan, president of the Mato Grosso grain growers association. He said non-tolerant soy was one of the most susceptible plants to dicamba’s toxicity.

Bayer launched the Xtend package in the United States in 2016. In Brazil, it said it was prepared to train farmers extensively should they decide to adopt it. “The choice of what technology to use always falls on the farmer,” it said.

Aprosoja said in the United States more than 2,700 complaints had been filed by non-users of the Xtend technology who were affected by dicamba drifting from nearby farms.

Reuters was unable to independently verify this claim. Bayer did not comment specifically on the number of complaints received.

“Dicamba is dangerous. We have no need of it,” Soares said.