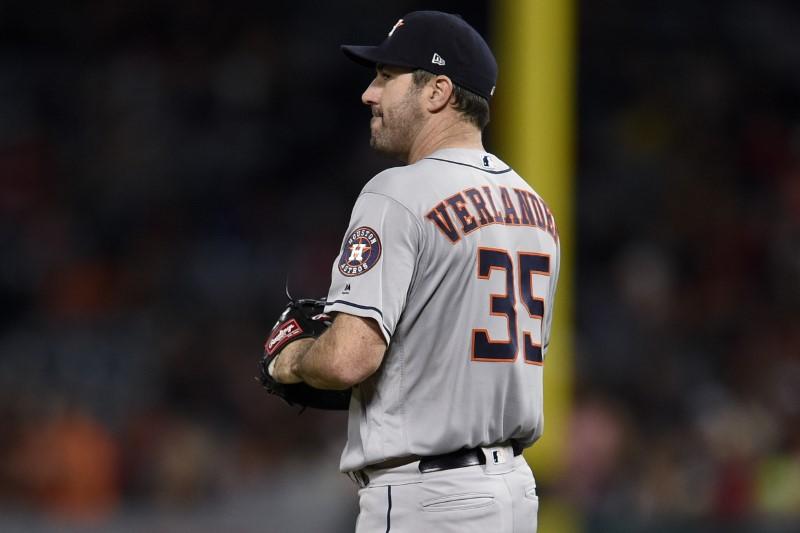 Justin Verlander became the 18th pitcher in major league history to reach the 3,000-strikeout plateau on Saturday as the Houston Astros recorded a 6-3 victory over the Los Angeles Angels in Anaheim, Calif.

Verlander (21-6), who fanned 12 batters to push his career total to 3,006, struck out Kole Calhoun in the fourth inning to hit the milestone. He also fanned Calhoun in the sixth for his career-high 300th strikeout of the season.

The 36-year-old Verlander joined Gerrit Cole (316) as the only set of teammates to strike out at least 300 batters in a season since Randy Johnson (334) and Curt Schilling (316) accomplished the feat for the 2002 Arizona Diamondbacks.

Josh Reddick belted a three-run homer and Jose Altuve also went deep and drove in three runs for the Astros, who have won 11 of their last 13 contests and clinched home-field advantage throughout the playoffs.

Trevor Story hit a walk-off homer to lead off the bottom of the 10th inning, and host Colorado again put a dent in Milwaukee’s division title hopes with a win in Denver.

Milwaukee had a chance to tie the St. Louis Cardinals atop the NL Central after St. Louis lost to the Chicago Cubs. But the Rockies got a tying solo homer from Sam Hilliard off closer Josh Hader with two outs in the ninth and Story’s 35th of the season off Matt Albers (8-6).

Ian Desmond tripled and also went deep for Colorado, and Jairo Diaz (6-4) tossed one inning in relief to get the win. Eric Thames homered, and Ben Gamel and Orlando Arcia also had two hits for the Brewers. Milwaukee manager Craig Counsell was ejected in the ninth inning.

The Cardinals have lost four straight games as their National League Central title quest stalled. They maintained a one-game lead with one game to play over the second-place Milwaukee Brewers. The Cardinals would host a one-game tiebreaker on Monday.

Reliever Steve Cishek (4-6), the fifth of seven Cubs pitchers, earned the victory. Brandon Kintzler closed out the game for his first save. Cubs starting pitcher Cole Hamels worked four scoreless innings and struck out eight batters. In 19 innings against the Cardinals this season, he struck out 22 batters and didn’t allow a run.

Hyun-Jin Ryu tossed seven strong innings and had an RBI single in the fifth as Los Angeles tied the franchise’s all-time win record for a season (105) by blanking host San Francisco.

Max Muncy homered to lead off the sixth inning to help the Dodgers win their sixth straight game and tie Brooklyn’s win total in the 1953 season.

Los Angeles remains one game behind the Houston Astros for the best record in the majors. Ryu (14-5) allowed five hits and struck out seven while lowering his ERA to a major-league-best 2.32.

Ramon Laureano hit a solo homer with two outs in the top of the third off Mariners left-hander Marco Gonzales (16-13) to account for the game’s lone run.

Anderson (13-9), making his first start since Sept. 17 as the A’s attempted to limit his innings to reduce the stress on his arm, allowed three hits, walked one and struck out three.

The Nationals have won a season-high seven straight and will host either the Milwaukee Braves or the St. Louis Cardinals on Tuesday night.

Washington collected 11 hits and five walks to win on a day that their starter, Patrick Corbin, lasted just 4 1/3 innings, surrendering six runs on seven hits while striking out eight and walking two.

Pete Alonso broke the single-season rookie home run record when the New York slugger crushed a solo blast to center field in the third inning of a win over visiting Atlanta.

Alonso’s milestone 53rd homer — breaking a tie with New York Yankees slugger Aaron Judge, who set the mark in 2017 — came on a 2-1 pitch from Mike Foltynewicz (8-6), who spun and lowered his head upon hearing the sound of bat hitting ball. Alonso dropped his bat, walked a few steps up the baseline and then raised his arms while looking toward the crowd and home dugout.

Rene Rivera hit a two-run homer earlier in the inning for the Mets, who have won the first two games of the season-ending three-game set. Steven Matz (11-10) earned the win after allowing two hits and five walks while striking out seven over six innings.

Texas rolled to its third win in the last 13 games by sending 11 men to the plate against Luis Cessa and Nestor Cortes Jr. in the sixth. The Rangers turned the game into a blowout when Odor hammered a 2-1 fastball over the center field fence. Odor reached 30 homers for the third time and hit his fifth career grand slam.

Aaron Judge tripled and scored on a sacrifice fly by Brett Gardner in the top of the first as the Yankees did not homer for only the 23rd time this season. Didi Gregorius added a bases-loaded double with two outs in the ninth to score three.

Martin and Mancini each had two hits and two RBIs as the Orioles put themselves in position to finish a three-game sweep in the regular-season finale Sunday. John Means (12-11) earned the win, allowing three runs on five hits with two walks and five strikeouts over five innings.

Xander Bogaerts and J.D. Martinez homered for the Red Sox, who lost their third straight. Bogaerts had three hits.

Nelson Cruz belted a leadoff home run in the eighth inning to help Minnesota defeat host Kansas City. Cruz is hitting .371 with nine home runs and 28 RBIs in 16 games against Kansas City this season, the most RBIs against the Royals by one player in Kansas City history.

Twins starting third baseman Luis Arraez was carted off with an apparent right leg injury after a collision with first baseman Willians Astudillo. The Twins announced after the game that Arraez has a sprained right ankle, and X-rays were negative.

Tyler Duffey (5-1), the sixth of eight pitchers the Twins used, picked up the win, despite giving up the second of Jorge Soler’s two home runs. Soler took the American League lead in homers, having been tied at 45 with the Los Angeles Angels’ Mike Trout, who is injured and out for the season.

Maikel Franco launched a two-run shot and Cesar Hernandez also went deep for the Phillies, who can secure their first winning season since 2011 with a victory in Sunday’s series finale.

Elfin improved to 3-1 against the Marlins this season after allowing three runs on six hits before leaving the game after surrendering a two-run homer to Neil Walker in the eighth inning. Caleb Smith (10-11) took the loss for Miami after striking out one and walking four in three innings.

The Rays already clinched an American League wild-card berth but the loss, combined with the Oakland Athletics’ win over Seattle, means the Rays will have to travel to Oakland for the AL wild-card game Wednesday.

Toronto’s Cavan Biggio singled and has reached base safely in 28 consecutive games, a club record for a rookie. Russ Adams reached base in 27 straight games in 2005.

Lopez (10-15) closed his season on a high note, scattering one run on five hits with one walk and nine strikeouts. Seeking his second complete game of the season, Lopez started the ninth inning but was lifted following Victor Reyes’ leadoff single, one of Reyes’ two hits in the game.

Detroit opened the scoring with two outs in the first inning, as designed hitter Miguel Cabrera smacked a solo home run to left-center field. The home run was the 476th of Cabrera’s career, moving him past Stan Musial and Willie Stargell and into a tie for 30th with Adrian Beltre on the major league all-time list.

John Hicks smacked a pinch-hit, three-run home run with one out in the ninth inning to help visiting Detroit defeat Chicago, earning a doubleheader split.

Hicks connected against Chicago closer Alex Colome (4-5), who allowed three runs — two earned — and three hits in 2/3 of an inning. Colome struck out one en route to blowing his third save in 33 opportunities.

Joe Jimenez navigated a one-out home run from Yoan Moncada in the bottom of the ninth to earn his ninth save.

Walker tied a career high with five RBIs in his second career two-homer game. Manny Machado hit a two-run homer, and Luis Urias and Eric Hosmer had solo homers for the Padres, who have lost five in a row.

Arizona won its fourth straight game and matched a franchise record with 220 homers this season, first done in 2017.

The game was stuck at 2-2 from the fourth inning to the 12th. Then in the 12th, against Pittsburgh reliever Alex McRae (0-4), Kyle Farmer led off with a single. Phillip Ervin was hit by a pitch. Tucker Barnhart hit into a double play, with Farmer moving to third.