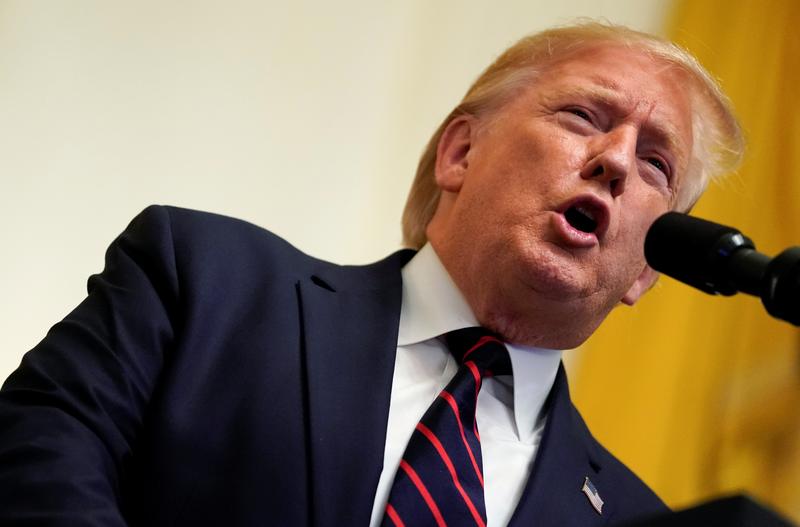 Now, a central question for Democratic lawmakers moving with remarkable speed to impeach him is the extent to which Trump entangled both his office and the machinery of the U.S. government to spark investigations that would benefit him personally.

The White House and Trump’s aides have already put much of that evidence on public display.

During a telephone call in July, Trump urged Ukrainian President Volodymyr Zelenskiy to speak with his personal lawyer, Rudy Giuliani, who had been pursuing a globetrotting effort to find out whether Ukrainian officials improperly dropped an investigation of a company that had hired the son of former U.S. Vice President Joe Biden, one of the leading contenders to challenge Trump when he seeks re-election in 2020.

The president also offered to involve the U.S. attorney general, according to a summary of the call the White House released last week.

Giuliani has said the State Department helped arrange meetings with aides to Zelenskiy, posting a copy of a text message from a U.S. diplomat on Twitter.

And much of the episode played out at a time when Trump’s administration had suspended security aid that the U.S. government had earmarked for Ukraine to help it contain threats from Russia.

After Zelenskiy mentioned to Trump that the country was ready to buy new anti-tank missiles, Trump replied that he “would like you to do us a favor” by looking into whether the probe of Russian election interference that shadowed much of his first term was a Ukrainian plot.

“The core facts of this are known,” said Ross Garber, who teaches impeachment law at Tulane Law School. “The piece we don’t know yet, which is critical, is the why.”

Trump on Friday described his call with Zelenskiy as “perfect”.

An anonymous whistleblower complained in August to the U.S. Intelligence Committee Inspector General that some White House officials took a decidedly different view.

The whistleblower said multiple White House officials reported being “deeply disturbed” by the president’s call with Zelenskiy, “because of the likelihood, in the officials’ retelling, that they had witnessed the President abuse his office for personal gain.”

That complaint, filed by an unidentified Central Intelligence Agency officer and based largely on the accounts of other government officials, ignited a rapid effort by Democrats who control the House of Representatives to open an impeachment investigation of Trump, opening a new legal threat to his presidency.

It also offered a roadmap for lawmakers investigating the administration, and the potential to lead them to still more documents and witnesses. Congressional officials have had preliminary discussions about speaking to the whistleblower, but have not yet made arrangements to question him, a person familiar with the discussions said.

The complaint and the political waves it sent through Washington were the latest chapter in a saga that began playing out six months ago.

In March, Ukraine’s then-prosecutor general, Yuriy Lutsenko, claimed in an interview with The Hill that Biden had pressured Ukrainian officials to fire another prosecutor, Viktor Shokin, to end an investigation into an Burisma Holdings, an energy company whose board included Biden’s son Hunter.

He also alleged that Ukrainian officials had tried to meddle in the 2016 U.S. election by leaking damaging information about Trump’s former campaign manager, Paul Manafort, who later became a central figure in the U.S. government’s own probe of Russian election interference.

In the months that followed, Trump, Giuliani and some State Department officials embarked on an unusual – but hardly secret – effort to press Ukraine’s new government to conduct its own review of those claims, an inquiry that would inevitably raise questions about one of Trump’s chief political rivals and the investigation that sewed doubt about the legitimacy of his election.

He, the White House and the unnamed CIA whistleblower have since made clear that he had significant help from the U.S. government.

Giuliani on Thursday posted a text message from Kurt Volker, a State Department special representative to Ukraine, on July 19 connecting him with one of Zelensky’s associates.

A week later, Trump himself urged Zelenskiy to call Giuliani, telling him “if you could speak to him that would be great,” according to a White House summary of the call.

The next day, the CIA whistleblower said, Volker and Gordon Sondland, the U.S. ambassador to the European Union, visited Zelenskiy in Kiev, where they gave him advice on “how to navigate the demands that the President had made.”

At the same time, Trump had put on hold nearly $400 million in security aid to Ukraine.

The CIA whistleblower said the order to suspend aid payments “had come directly from the President” and that officials were “unaware of a policy rationale.” The administration released the aid in September. Trump has said he did not tie the security aid to Ukraine’s help in investigating Biden.

The involvement of U.S. diplomats drew immediate scrutiny from lawmakers.

Three House committees subpoenaed Secretary of State Mike Pompeo on Friday to hand over documents about his agency’s involvement.

“It appears that our policy with Ukraine was effectively outsourced to a private individual pursuing the personal vendettas of the President,” said Senator Bob Menendez of New Jersey, the senior Democrat on the Foreign Relations Committee.