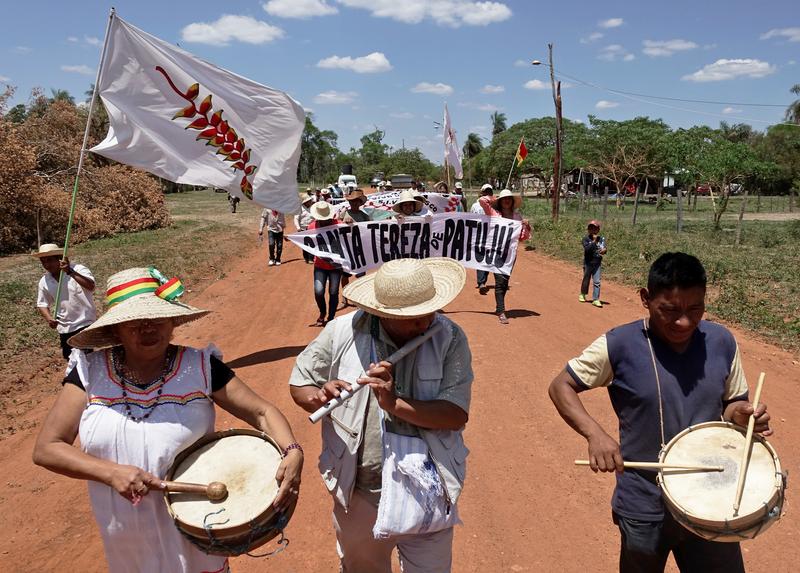 CHIQUITANO FOREST, Bolivia (Reuters) – In Bolivia’s fire-ravaged lowlands, a caravan of indigenous protesters is marching hundreds of miles to demand President Evo Morales declare a surge in wildfires a national disaster, a move they hope will unleash international aid.

Morales has been reluctant to make the designation as he campaigns for a fourth presidential term ahead of Oct. 20 elections, despite growing calls that he acknowledge the fires – which have already burned an area bigger than Costa Rica – were beyond his government’s control.

Some 200 protesters – most indigenous Chiquitano people from Bolivia’s east – have joined the caravan since it departed earlier this month from San Ignacio de Velasco, a ranching hub where fires have forced villagers from their homes and threatened pastures that sustain half a million head of cattle.

“He hasn’t declared a national disaster despite all this misfortune we’ve suffered,” Joaquin Orellana, the organizer of the march, said of Morales as he walked along an unpaved road alongside protesters playing flutes and drums.

“Everything’s burned where I’m from. We don’t know what to do,” Orellana said of his village of San Miguel.

Protesters, including women with young children and elders, have camped out in empty lots and relied on donations of food, water and clothes from villages along the march’s 500-kilometer (311-mile) route.

They aim to reach regional capital Santa Cruz de la Sierra, where Orellana expects the demonstration to expand into a show of force of indigenous people from the lowlands whom he says feel abandoned by Morales’ government.

Morales, South America’s longest-serving leftist leader, is Bolivia’s first indigenous president, hailing from Bolivia’s largest indigenous group, the Aymara. His government has said declaring a national disaster would turn a sovereign issue over to foreigners, echoing concerns voiced by neighboring Brazil’s far-right President Jair Bolsonaro, who has sparked a global outcry over his handling of fires in the Brazilian Amazon.

Morales is also fighting for his political survival in an increasingly tight presidential race. Recent polls show he might be forced to go to a run-off race with his chief rival, Carlos Mesa, a business-friendly former president.

The wildfires – the biggest in at least two decades – have thrown Morales’ re-election campaign into disarray, drawing waves of criticism of his push to ramp up soy and beef production to tap demand from China.

FIGHTING FOR THE PLANET

They say the government’s response has fallen short as fires have swept over some 15,000 square miles in the region of Santa Cruz alone, according to recent figures from Bolivian environmental group Friends of Nature Foundation (FAN).

Santa Cruz is home to large swaths of Bolivia’s biodiverse Chiquitano dry forests, named for the indigenous people who have lived in them for hundreds of years. Protesters say a declaration of national disaster would remove bureaucratic barriers to help from abroad to contain fires.

“We’re losing all we have,” protester Tomas Candia told Reuters. “We’re fighting for the planet, against global warming. ..We can’t permit this.”

The fires are part of a double whammy to hit the lowlands this year, coming on the back of a severe droughts that have forced towns like San Ignacio to impose water rationing.

Environmentalists say increasingly severe droughts are driven by a surge in forest clearings that limit the climate’s ability to recycle precipitation, increasing the risk of wildfires.

At the United Nations in the last week, Morales tried to steer the narrative back to his government’s efforts to put out the fires, which he says has cost Bolivia $15 million so far.

“We’re winning the battle against the fire,” Morales told a panel on the Amazon. “Our response has been rapid and effective.”

But in the Chiquitano dry forests, in the heart of South America, villagers disagree. Poorly equipped firefighters with Bolivia’s volunteer-based units have given up on controlling some infernos, with an early start to the rainy season the best hope for overwhelmed local governments.

In Santa Elena, a Chiquitano village of three dozen families, fires have destroyed crops of papaya, manioc and rice, and charred forests where they hunted game. Only small groups of men remain.

“This is our life,” said Eduardo Roca, one of the men who have stayed behind. “How can we abandon our homes?”

Reporting by Santiago Limachi and David Mercado in the Chiquitano Forest; Writing by Mitra Taj; Editing by Lisa Shumaker