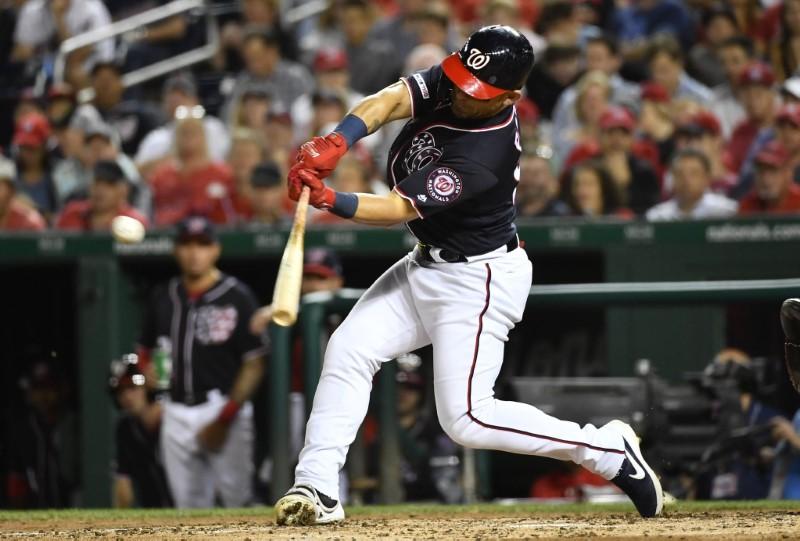 The Cleveland Indians lost 8-2 Friday night to the Washington Nationals, allowing the Rays to book a place in the postseason for the first time since 2013. The Oakland A’s also sealed an AL wild card thanks to Cleveland’s loss.

Tampa Bay right-hander Tyler Glasnow, making his fourth start since returning from a four-month absence caused by a forearm strain, did not allow a hit and walked two while striking out four in 4 1/3 scoreless innings.

Oliver Drake (5-2) gave up one run in two innings to earn the win. Emilio Pagan pitched a perfect bottom of the ninth.

Gerardo Parra had three hits, including a home run, and drove in four runs as host Washington defeated Cleveland. The Indians were eliminated from playoff contention shortly after the defeat.

Washington earned its sixth straight win and extended its lead to two games over the Milwaukee Brewers for the top spot in the National League wild-card race.

Sam Hilliard and Daniel Murphy each had two hits for the Rockies, who stopped Milwaukee’s seven-game winning streak.

Colorado put the game away with a seven-run sixth inning that featured a leadoff homer from Blackmon and a pinch-hit grand slam from Tapia.

Ian Happ hit a solo homer and an RBI double in consecutive innings to lead visiting Chicago past St. Louis.

Cubs reliever Brad Wieck (2-2) earned the victory by getting one out in the sixth inning. Cardinals reliever Andrew Miller (5-6) was charged with four runs in one-third of an inning.

St. Louis starter Dakota Hudson worked five scoreless innings and struck out 10. However, he walked five batters (one intentionally) and needed 97 pitches to get 15 outs. Chicago’s Alec Mills struck out nine batters in five innings, and he allowed Matt Carpenter’s solo homer in the fourth.

Alex Bregman and Michael Brantley homered, and Jose Urquidy and three relievers combined on a three-hitter as the Houston Astros beat the Los Angeles Angels on Friday night.

With the win, the American League West champion Astros (105-55) clinched home-field advantage throughout the AL playoffs.

Bregman hit his team-leading 41st home run leading off in the second inning, but the game remained 1-0 until the eighth, when Brantley belted a two-out, three-run homer.

Despite Stanton’s big night, the Yankees were faced with another injury when left-hander James Paxton exited for precautionary reasons after the first inning due to tightness in his left glute.

The Yankees (103-57) entered Friday night trailing Houston by two games for the best record in the majors and homefield advantage throughout the postseason. New York rebounded from scoring once in two losses at Tampa Bay by hitting six homers for the fourth time this season, raising its total to 305, passing the Minnesota Twins (303).

Minnesota scored two runs in each of the first three innings, getting two-run home runs from Miguel Sano and Ryan LaMarre, in winning at Kansas City. The game was called after a 40-minute rain delay following the top of the seventh inning.

Jose Berrios (14-8) was credited with a complete-game win. He gave up two runs on six hits and two walks in six innings with nine strikeouts.

The Royals’ Whit Merrifield went 2-for-3, and he leads the major leagues with 203 hits. He also has 31 hits in September, his ninth straight month with at least 30 hits, excluding March and October. The last player to do that was Ichiro Suzuki in 2007-08.

Pete Alonso tied the major league single-season record with his 52nd homer, but it was J.D. Davis who hit the tiebreaking two-run homer that lifted host New York to a win over Atlanta.

The seventh win in 10 games by the Mets cost the National League East champion Braves a chance at the franchise’s first 100-win season since 2003.

Alonso, who was 0-for-4 with four strikeouts Thursday night, wasted no time Friday tying the record set by the New York Yankees’ Aaron Judge in 2017. Batting in the first inning, Alonso hit a line drive down the left field line on the second pitch he saw from Braves starter Dallas Keuchel.

Kevin Newman’s second homer of the game, a two-run shot to left in the ninth inning, lifted host Pittsburgh to a walk-off win over Cincinnati.

Newman’s 12th homer came off Raisel Iglesias (3-12) and gave the Pirates their fourth straight win. They also have beaten the Reds all eight times the teams have met at PNC Park.

Philip Ervin hit a two-run single and Michael Lorenzen an RBI single for the Reds, who have lost five in a row. Pittsburgh starter Steven Brault struck out a career-high 10 in five innings. He gave up four runs, four hits and four walks.

Nunez’s blast was his 30th of the season, and he drove in all four runs for the Orioles. Wojciechowski (4-8) held the Red Sox to four hits, walking one and striking out six.

Boston, which got an RBI single from Xander Bogaerts in the ninth inning, lost to Baltimore for just the sixth time in 17 meetings this year.

Rhys Hoskins scored on a 15th-inning error as host Philadelphia emerged with a walk-off win over Miami in a game that lasted 5 hours, 13 minutes.

Lamb has four career pinch-hit homers, two off Luis Perdomo (2-4). The Diamondbacks had only six hits, and none after Carson Kelly doubled to open a two-run fifth, until the eighth.

Manny Machado had three hits, including his 31st homer, and Luis Urias hit an RBI double for a 3-2 lead in the seventh for the Padres, who have lost four in a row. The Diamondbacks have won six of their past eight.

Detroit saw a 4-2, fourth-inning lead wiped out when the opening game of a doubleheader at Chicago was rained out. The second game was also postponed, too.

The teams will play a straight doubleheader on Saturday. The Tigers and White Sox will then conclude the regular season with a single game Sunday as scheduled, meaning both teams will end the season having played just 161 games.