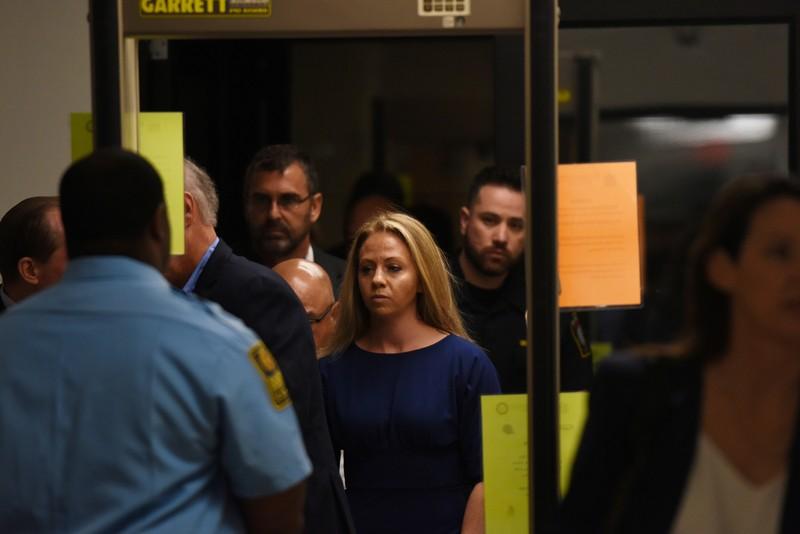 DALLAS (Reuters) – A former Dallas police officer testifying in her own defense on a murder charge wept in the courtroom on Friday, and said she asks God daily for forgiveness since she killed her unarmed neighbor in his own apartment after she entered by accident.

Amber Guyger, who is charged in the killing of Botham Jean in his own home, arrives on the first day of the trial in Dallas, Texas, U.S., September 23, 2019. REUTERS/Jeremy Lock

After returning from a short recess called by the judge because she was unable to speak through her tears, the former officer, Amber Guyger, broke down again on the stand when her lawyer held up the weapon she used in the shooting and asked why she pulled the trigger.

“I was scared this person was going to kill me,” she said. “I’m so sorry, I’m so sorry. I have to live with this every single day.”

Guyger, 31, was coming off a 13-1/2 hour shift when she walked into the central Dallas apartment of Botham Jean, a 26-year-old black PwC accountant, and shot him as he ate ice cream, thinking he was a burglar in her apartment one floor lower.

Guyger, who is white, said she mistakenly thought she had parked on her own level in her apartment building’s parking garage after her shift. “I kept thinking I was so lucky” for finding a spot next to the entry door, she said, making it easier to carry her gear into her apartment.

In her testimony, Guyger told jurors that the shooting “is not about hate, it’s about being scared.”

It is relatively rare for criminal defendants to testify in their own defense at trial since it subjects them to cross-examination by prosecutors who will attempt to poke holes in their story.

“When you shot him twice, you intended to kill him, didn’t you?” Assistant District Attorney Jason Hermus asked Guyger.

“I did,” she responded, in a calm voice.

Hermus sharply questioned Guyger why she performed virtually no CPR on Jean, and why in her panicked call to 911 just after the shooting she not once said she thought Jean had a weapon or that she had been scared for her life. The officer said she was in panic and that her mind was racing at that time.

The prosecutor also pressed Guyger on why she simply did not choose to not enter the apartment she thought was her own if she felt her life was in danger. The officer acknowledged that she could have done that – and that Jean would still be alive today if she had.

The shooting, one of a series of high-profile killings of unarmed black men and teens by white U.S. police, sparked street protests, particularly after prosecutors initially moved to charge Guyger with manslaughter, a charge for killing without malice that carries a lesser sentence than murder.

In contrast to cases like the killings of Michael Brown in Missouri and Philando Castile in Minnesota, Guyger shot Jean, while she was off duty, rather than while responding to a reported crime.

During the trial, Guyger’s defense attorney, Robert Rogers, said she was “on autopilot” after a long workday on Sept. 6, 2018 when she mistakenly parked on the wrong floor in the garage and was able to enter Jean’s apartment because he had left the door slightly ajar.

Hermus told the jury of four men and 12 women that Guyger missed blatant clues that she was not in her own apartment – including the smell of marijuana smoke – because she was distracted after a 16-minute phone conversation on her commute with her former police partner. Guyger testified that the call was in relation to work.